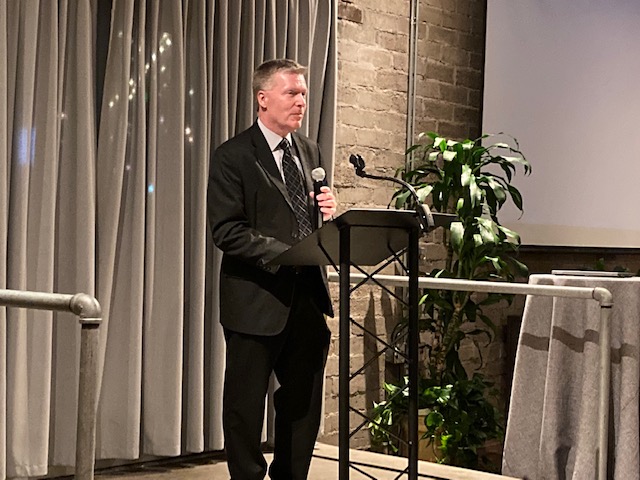 Among the many life events delayed by the Covid-19 pandemic was one that ADWR employees and people of the broader Arizona “water community” have been anxious to celebrate:

The Bar announced its selection of Ken in January 2020, but the dinner event that accompanies the award was postponed until this year. It proved to be well worth the wait.

ADWR Director Tom Buschatzke – who regrettably was out of town the night of the event - videotaped his appreciation for the work of his Department’s chief attorney. Buschatzke’s taped message was delivered on April 6 to the event attendees.

Speaking of the attributes that the Bar Association considers essential for candidates for the Brophy Award – honesty, integrity, courage and compassion – Director Buschatzke observed that Ken “is the embodiment of each and every one of these qualities.”

“If you’ve worked with Ken, you know that no one could serve as a better example of these traits,” he said. “I think his integrity speaks for itself and has earned him the universal respect of his colleagues.”

An attorney who has spent many years working with ADWR’s legal division, Jan Miller, said at event in Tempe that Ken “clearly is someone who has influenced every single attorney, every single person with whom he has crossed paths at ADWR.”

“The respect that he commands, not because he is forceful about it, he just gets it because everyone appreciates who he is and what he stands for.”

“Ken sees a different path. Ken asks the hard questions,” she said.  “He mentors you as only a good mentor and teacher can do.”

Former ADWR Director Rita Maguire, herself a former Brophy Award recipient, observed that she “can’t think of anyone more deserving of this award.”

“Good things come in quiet packages,” she quipped. “And when I think of ‘quiet,’ I think of Ken.

“I can honestly say, without reservation or hesitation, that I cannot think of anyone that I would rather work with. It’s been an extreme pleasure to work with him, day in and day out, on a number of different issues.”

Ken is the first Brophy Award recipient to have spent his entire career in public service. The Department’s legal division submitted the application nominating Ken for the Brophy Award.

The 2020 award came in a nick of time. Ken has announced plans for retirement later this year.

Accepting the award, Ken observed that while it took a while to receive the Brophy Award because of the pandemic, “it’s been well worth the wait for me.”

Speaking of the many water attorneys with whom he had worked over the years – both inside and outside the Department – he said, “I think we all share the same goal: Trying to make sure there is enough water to make Arizona a great place to live.”

Ken noted that people often express surprise to learn that he had worked so long for one state agency. He said there were two reasons why:

“One is that I enjoy the work that I do,” he said. “The second reason is the people that I work with.

The Bar Association bestows the award upon an Arizona attorney whose career reflects high achievement in the realm of environmental and water law.

The award is named after Michael J. Brophy, a widely admired attorney who passed away unexpectedly in 2006. A nationally renowned water lawyer, Brophy was best known for his work in connection with negotiating and securing water-rights settlements for several Arizona tribes.

The Bar notes that the Brophy Award is created to recognize lawyers “who think creatively about clients’ problems and solutions, teaches and mentors younger lawyers, and strives to balance the demands of their personal and professional life.” Ken assuredly checks all those boxes as well.

Even attorneys who identified themselves as Ken’s “adversaries” in the legal world hailed his professionalism.

In another letter supporting Ken’s nomination, attorney Carla A. Consoli noted that “Ken Slowinski’s positive impact on the natural, built and human environment will be felt for decades to come.”

Previous award winners include Karen Gaylord, leader of the environmental practice at the Jennings Haug Cunningham firm; and, Jay Moyes, a leading figure in water and power policy development in Arizona and one of the co-founders of the Bar’s Environmental & Natural Resources Section.