Following the Colorado River story: A primer on water terminology

Following the Colorado River story: A primer on water terminology

A guide to terminology about water in the Southwest
Published: November 3, 2022

The crisis on the Colorado River System is capturing the attention of the world. News accounts filled with mouth-drying terms such as “dead pool” and “system crash” have reached readers in Berlin, Mumbai, Tokyo and elsewhere. The image of a speedboat sitting upright in what used to be Lake Mead with its stern buried in the mud has illustrated literally hundreds of news accounts. And, then, there are the countless reports of the discovery of human remains revealed in the receding waters of Lake Mead. The eyes of the world literally are upon Lake Powell and Lake Mead.

It is a story rife with complexity. Few subjects are as complex as that of water and the means by which it is divided up among its users. 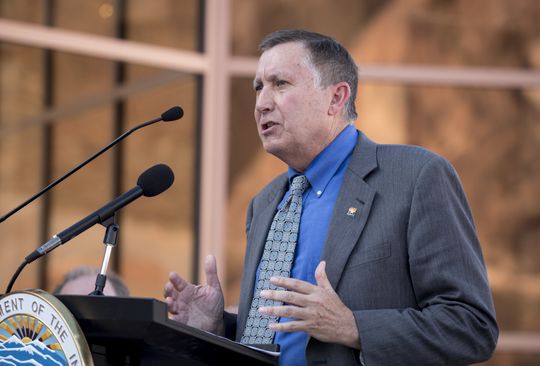 On Friday, Nov. 4, members of the Arizona Reconsultation Committee - a panel of water users from across the state - will gather for a briefing on the current status of the Colorado River System. Information about that 10 am meeting can be found here.

They will use terminology that many people not conversant in “water-speak” will find foreign. It is a language that in many respects is unique to a subject that demands precision in its terminology.

Beneficial use:  Essentially a determination by the Bureau of Reclamation that concludes the person using the water is employing reasonable and appropriate conservation measures. It is normally construed to mean the consumption of water brought about by human endeavors. This includes use of water for municipal, industrial, agricultural, power generation, export, recreation, fish and wildlife, and other purposes, along with the associated losses incidental to these uses. Pursuant to 43 CFR 417.2, Reclamation’s regional director for the Lower Colorado River region will make annual recommendations regarding water conservation and operating practices to ensure that “deliveries of Colorado River water to each Contractor will not exceed those reasonably required for beneficial use.”

Bureau of Reclamation/Reclamation:  The federal agency responsible for the wholesale management and distribution of water in the 17 western United States.  Reclamation is a bureau within the Department of the Interior and the Secretary of the Interior acts as the “water master” for the Lower Colorado River by law.

Consumptive use:  The U.S. Supreme Court has defined this term to mean “diversions from the stream less such return flow thereto as is available for consumptive use in the United States or in satisfaction of the Mexican Treaty obligation.” Arizona v. California, 547 U.S. 150, 153 (1963).

Health & Public Safety:  In 2018, California enacted AB1668 and SB606, which require urban retail water suppliers to reduce water use and plan for drought.  The baseline per capita water use for indoor water use was set, by statute, at 55 gallons per capita, per day (gpcd).  In 2021, when critical drought was declared on the California State Water Project, the California Department of Water Resources issued a notice to Contractors of the minimum allocation of “not more than 55” gpcd “to meet domestic supply, fire protection, and sanitation needs during the year,” consistent with emergency regulations promulgated by the California State Water Resources Control Board.  No such “standard” exists across the Colorado River Basin.  However, as municipal water suppliers across the Basin are facing larger mandatory reductions, conversations have begun about what a minimum delivery requirement may be for junior priority users whose deliveries would otherwise be eliminated.

Mandatory cuts:  Uncompensated reductions in water use required by law resulting in verifiable water remaining in Lake Mead.  Reductions required by the 2007 Interim Guidelines relating to shortages and the Lower Basin DCP are mandatory.  Additional mandatory cuts may be required by the Bureau of Reclamation in the near future to protect the Colorado River system. 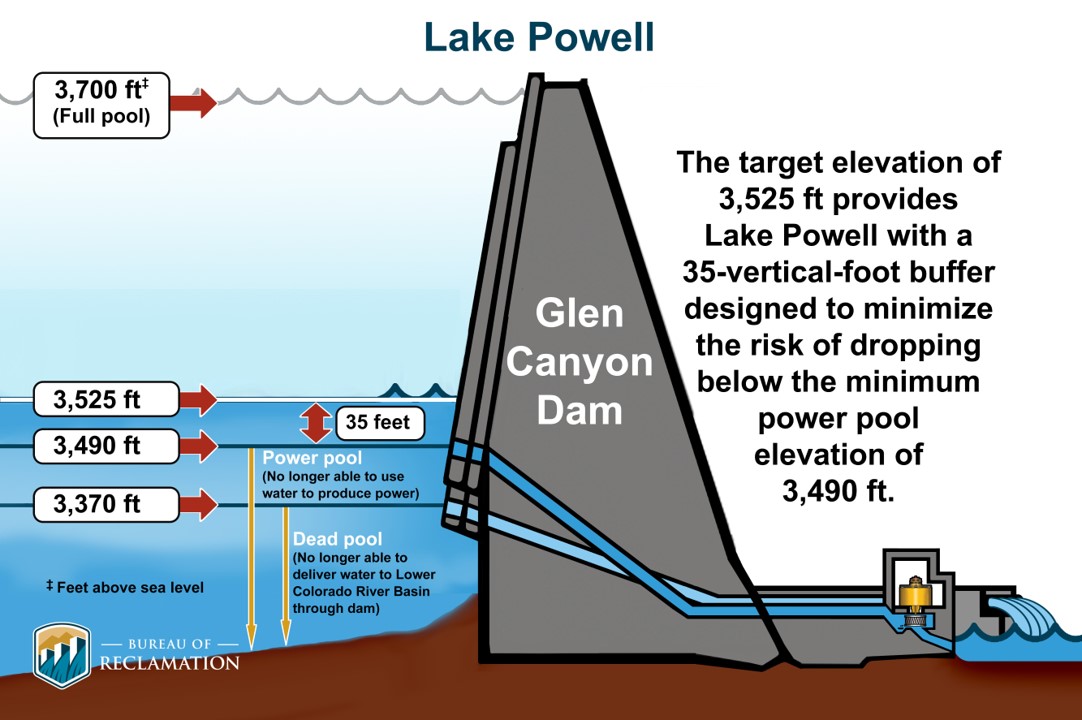 Operational neutrality:  This term stems from the May 3, 2022 decision issued by the Department of the Interior’s Assistant Secretary of Water and Science to hold back 480,000 acre-feet in Lake Powell in 2022. Although the water remained in Powell to help bolster surface levels there, for accounting purposes it was treated on Reclamation’s books as water that had been delivered to Lake Mead. “Operational Neutrality” refers to the Shortage Tier determination for the following Calendar Year by the Bureau of Reclamation.  For 2023, Reclamation made its operational determination by accounting for the 480,000 acre-feet as if it had been delivered to Lake Mead, rather than using the projected actual reservoir elevation.

Paper water:  Literally speaking, a water right that exists “on paper.” It is water that exists or is traded in terms of accounting, credits, or other transactions that does not involve the transfer of a physical volume of water.  Also commonly referred to in the West as flow rates and volumes that are claimed on legal documents, but not yet adjudicated or without documented historic use.

Protection volume - the amount of water conservation necessary to protect the Colorado River system from crashing. That amount first was defined in May by Bureau of Reclamation Commissioner Camille Touton as “between 2 - 4 million acre-feet” of water in the River System that was assumed to be used in 2023-2026 in Reclamation’s model .

Runoff efficiency:  The ratio of water-year runoff to water-year precipitation. Runoff efficiency has become a major consideration in recent years for the Colorado River system as dry soils, early and windy springs and other factors on the watershed have caused near-normal snowpack to produce very poor water-volume results. 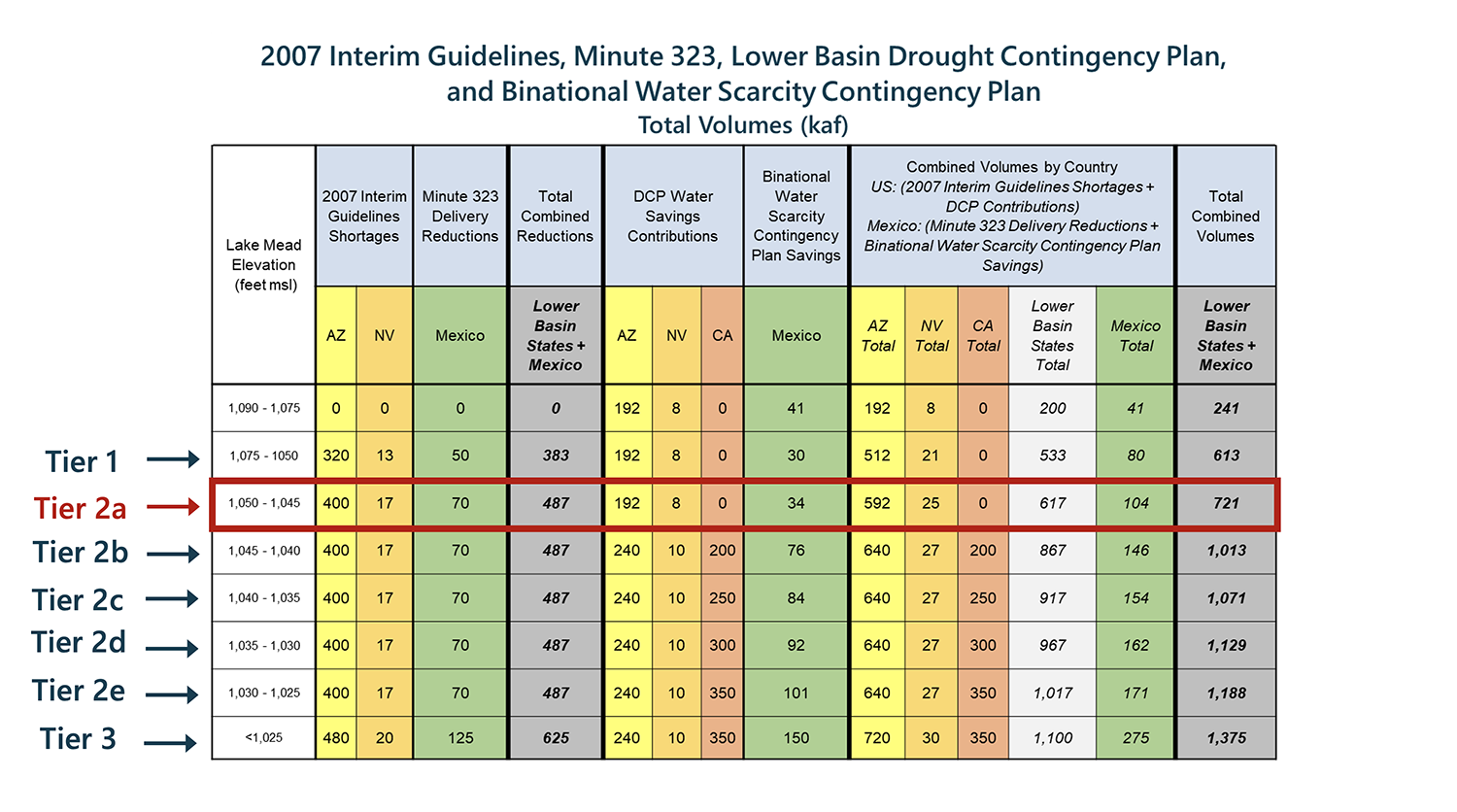 Tier 2a:  The Shortage Tier the Lower Basin will operate under in 2023.  The Shortage Tiers were defined and agreed to in the 2019 Drought Contingency Plan and authorized by both Congress and the Arizona Legislature.  A Tier 2a Shortage requires Arizona to reduce its delivery of Colorado River water by 592,000 acre-feet.

Wet Water:  A physical volume of water that physically can be (or is physically) transferred from one location to another. “Wet water” is used as a distinction from “paper water.”