In an April 29 online briefing that attracted over 700 viewers, the Director of the Arizona Department of Water Resources and the General Manager of the Central Arizona Project described the unprecedented, drought-driven challenges facing the Colorado River system and what Arizona is doing to address them. 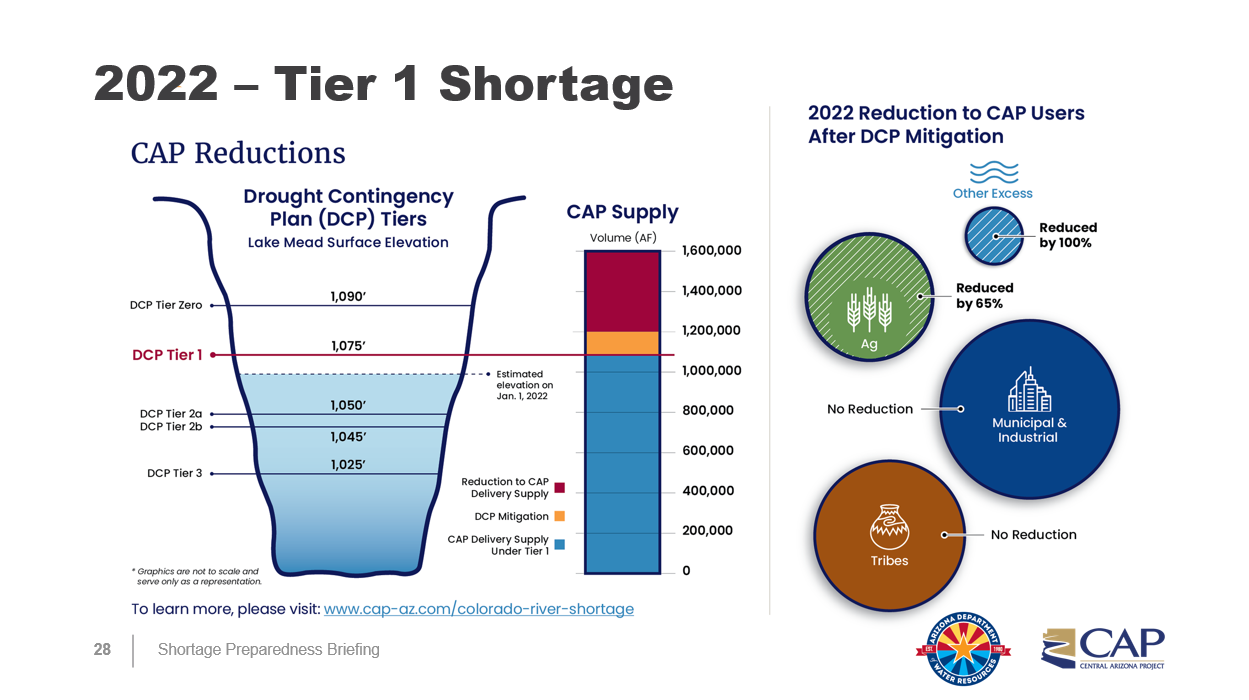 As Cooke, ADWR Director Tom Buschatzke, and Dan Bunk of the Bureau of Reclamation would go on to explain, the low surface levels at Lake Mead almost certainly will trigger substantial cutbacks in Arizona’s Colorado River deliveries beginning in 2022.

They also would explain, in detail, the decades-long effort by Arizona to prepare for those cuts.

“DCP was not meant to eliminate the chance of shortage overall, explained the ADWR Director. “DCP is a success. We likely would already be in Tier 2 without the DCP.” 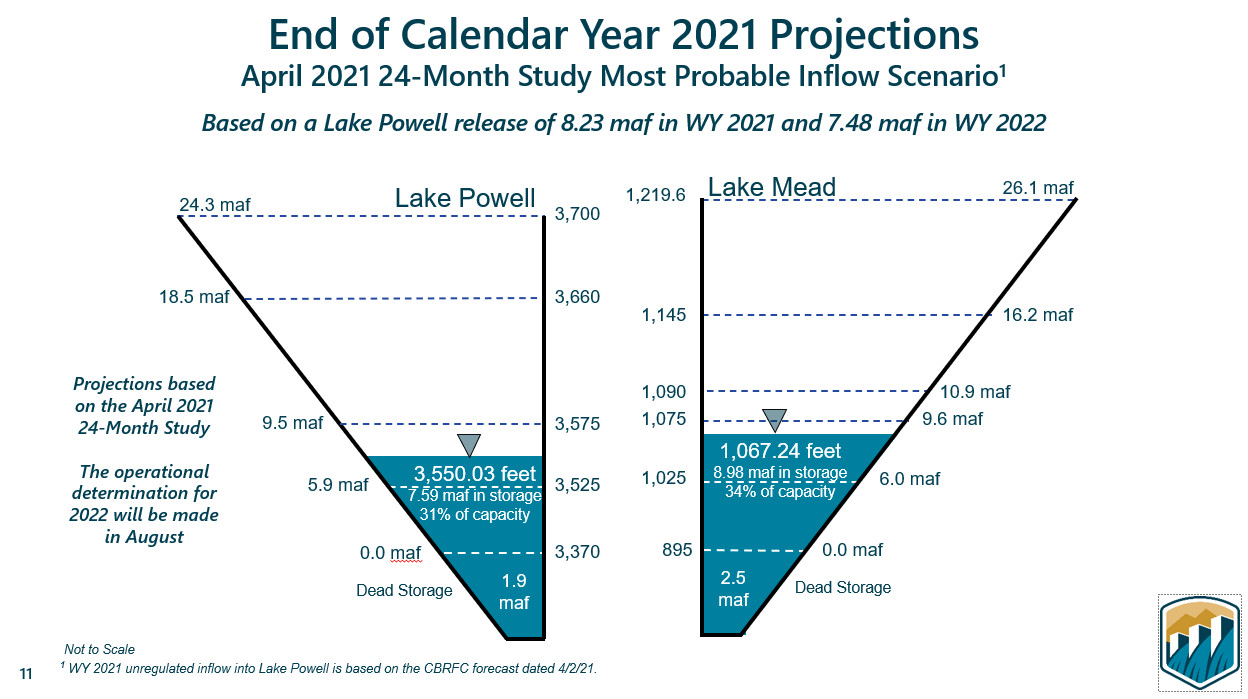 The Lower Basin DCP is a set of shortage-sharing agreements among the Lower Basin States of Arizona, California and Nevada that adds to the shortage-sharing agreements put in place by the Colorado River states in 2007. In a process known as “reconsultation,” the Bureau of Reclamation and the Basin States are preparing now for negotiations on a new set of operational rules that will take effect at the end of 2026.

While the official shortage determination will not be made until August, the Bureau determined in April that a Tier 1 declaration for 2022 appeared likely. This will require Arizona to increase the amount of its annual allocation that it leaves in Lake Mead to a total of 512,000 acre-feet, again borne almost entirely by the CAP system. 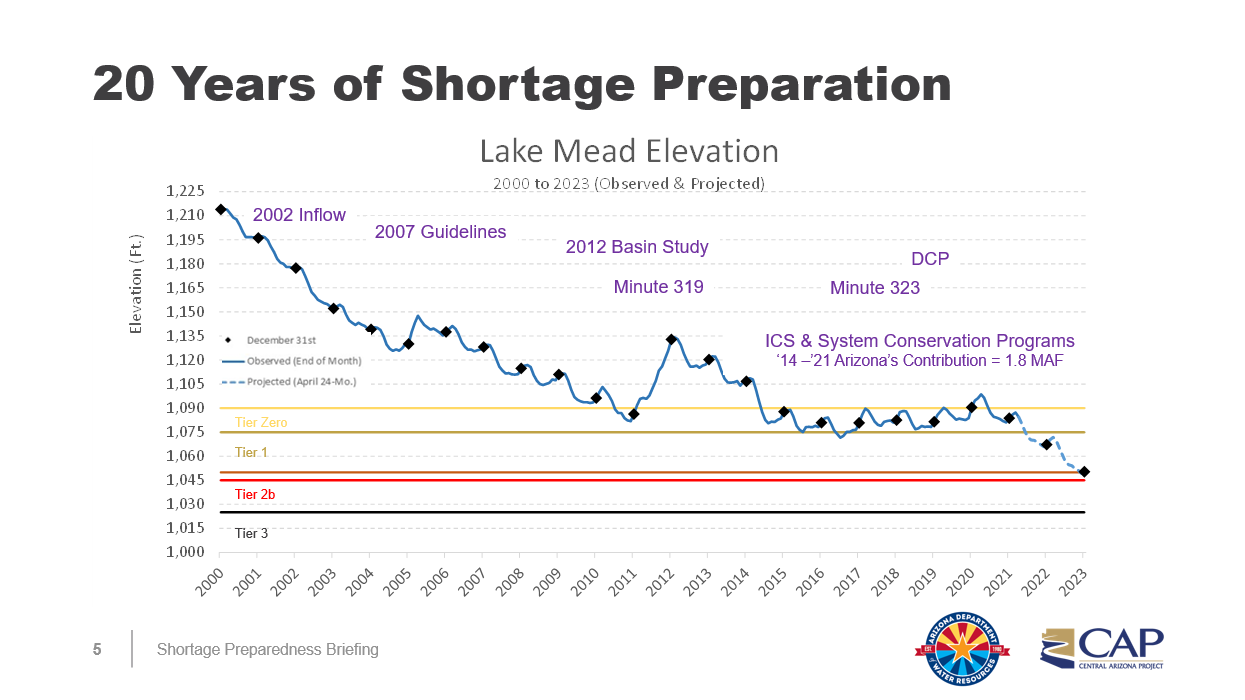 Both Director Buschatzke and General Manager Cooke noted that most of those delivery cuts will impact agricultural water users in the CAP system. Despite mitigation efforts for those farmers, ag entities in impacted areas ultimately may have to reduce acreage by 30 to 40 percent, said Buschatzke.

Regarding urban areas, Buschatzke observed that city dwellers will not be affected by the cuts. However, the drought plans of individual communities may prompt them to initiate conservation efforts, he said.

“There may be some cities who during the shortage decide, ‘we may want to start preparing. The drought might last for another 20 years.’ It’s up to the cities to put into place those types of homeowner restrictions.”

Buschatzke also noted that “we do a lot of planning. We have a lot of meetings. I would encourage people to follow those meetings closely. 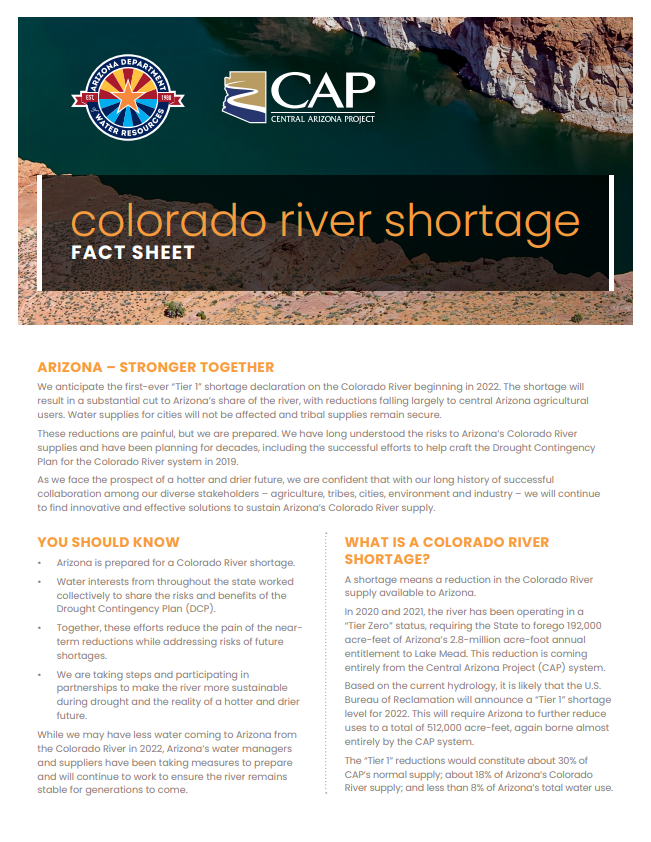 “We want to hear what you have to say… we need folks to be educated about the real risks, the real challenges and where we have plans in place and actions in place that are going to minimize those risks.”

To view a recording of the Apr. 29 Shortage Preparedness Briefing, go here

To read a joint message prepared by ADWR and CAP on the drought and the anticipated Tier 1 shortage, go here

For a fact sheet on the Colorado River shortage, go here