The Age of Webinar: Conducting presentations in a time of social distancing

The Age of Webinar: Conducting presentations in a time of social distancing

The Age of Webinar: Conducting presentations in a time of social distancing
Published: April 27, 2020

Like it or not, the Age of Webinar is upon us.

On April 23, the National Football League and its media associates orchestrated the opening rounds of its annual college player draft – a vast, multi-media undertaking that would have been enormously complicated technologically even if all the participants were together under the same roof – via webinar. 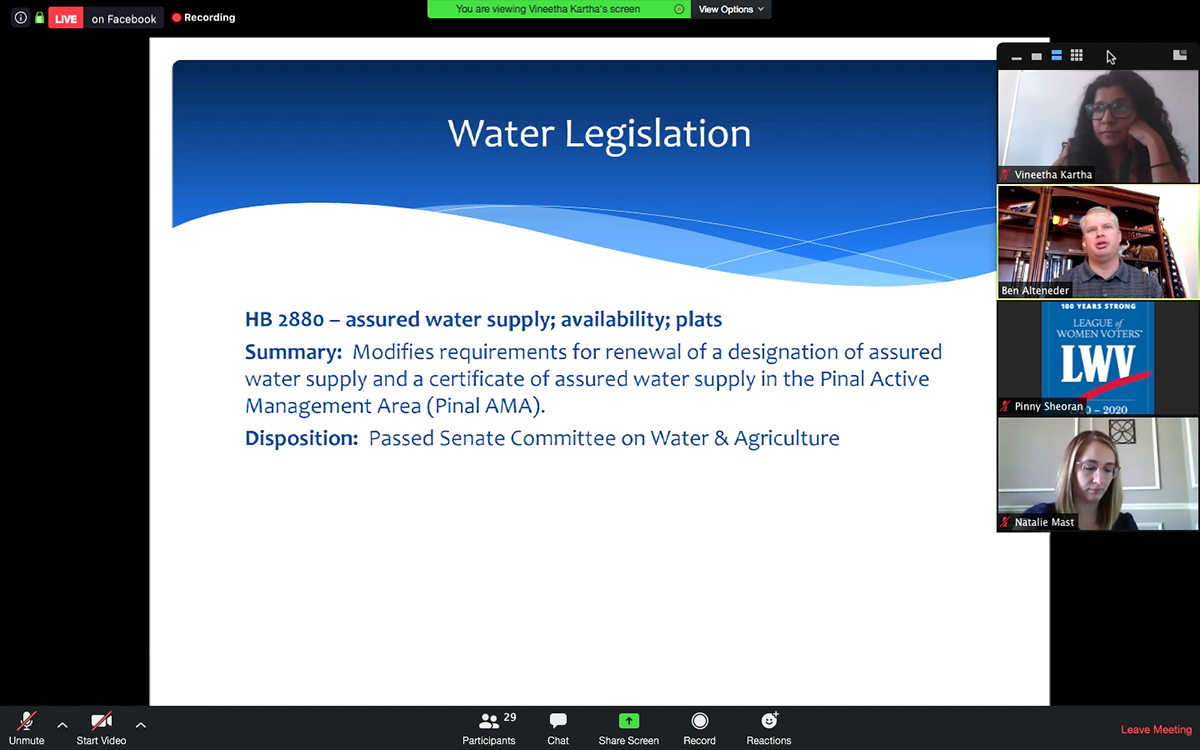 The production quality may have been a little sketchy. Sound… lighting… communications and cues to participants… all of it had that ad hoc, produced-in-your-living-room feel to it. But they pulled it off.

For the foreseeable future, large organizations (like the NFL) and small ones (like, oh, the Arizona Department of Water Resources) likely will be focusing more of their public-outreach resources into online presentations.

The technology of the webinar may not be new, but its status as an increasingly valuable means of public outreach is. Just ask the NFL how important online communication has become in recent weeks.

As an agency, ADWR is no stranger to the webinar. The Department conducts them and participates in them all the time.

But a recent ADWR presentation focusing on Arizona water issues for the League of Women Voters of Arizona may prove to be characteristic of its expanding utility. At least in the near term, online events may be replacing many in-person public gatherings. 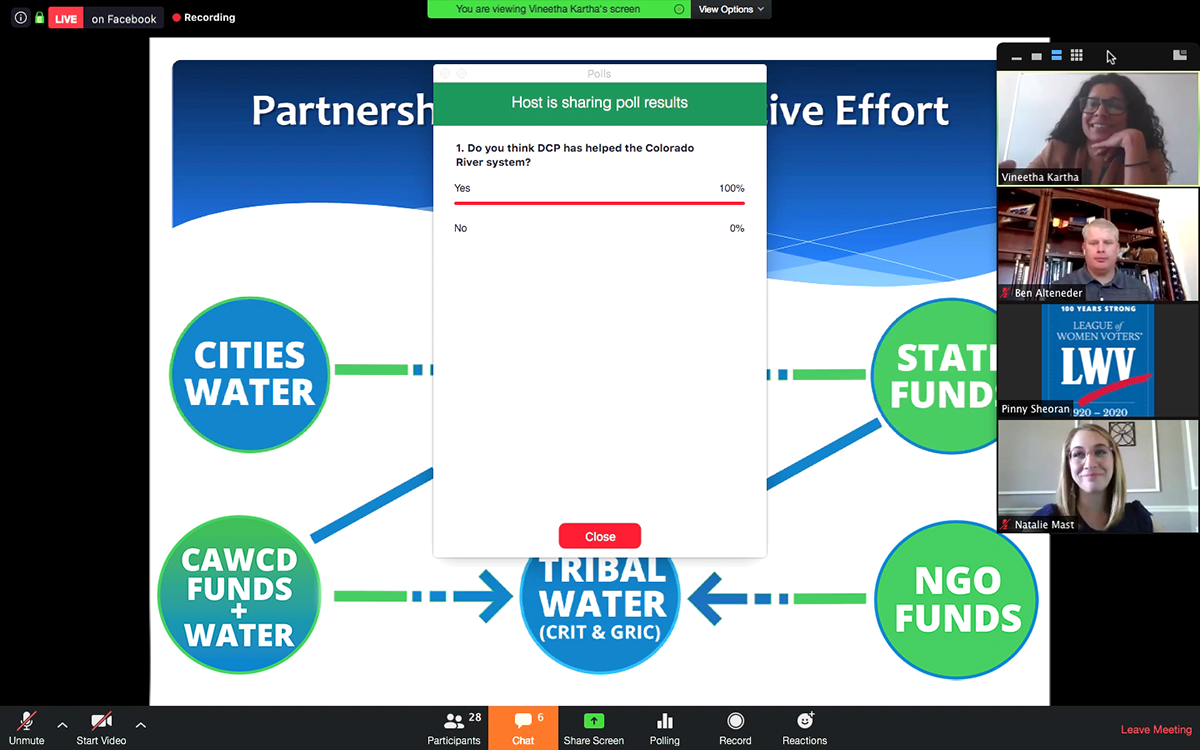 ADWR staff has presented before League audiences before, but in live and in-person presentations.

This one, an Earth Day presentation on “Water Management in Arizona,” was conducted entirely online with Department experts in Colorado River management, Active Management Area management, and legislative affairs providing updates, as well as providing League members with a summary of activity of the Governor’s Water Augmentation, Innovation and Conservation Council.

“We had planned to do this ADWR presentation as a webinar long before the COVID pandemic so that our members across the state would be able to share in it,” said Pinny Sheoran, the State Advocacy Chair for the Arizona League. The ADWR webinar was the third of three online presentations organized in April by the League.

Ms. Sheoran, whose strong technology background has helped her organize numerous web-based productions for the League, has an expert’s appreciation for the plusses and minuses of technology-based “meetings.” 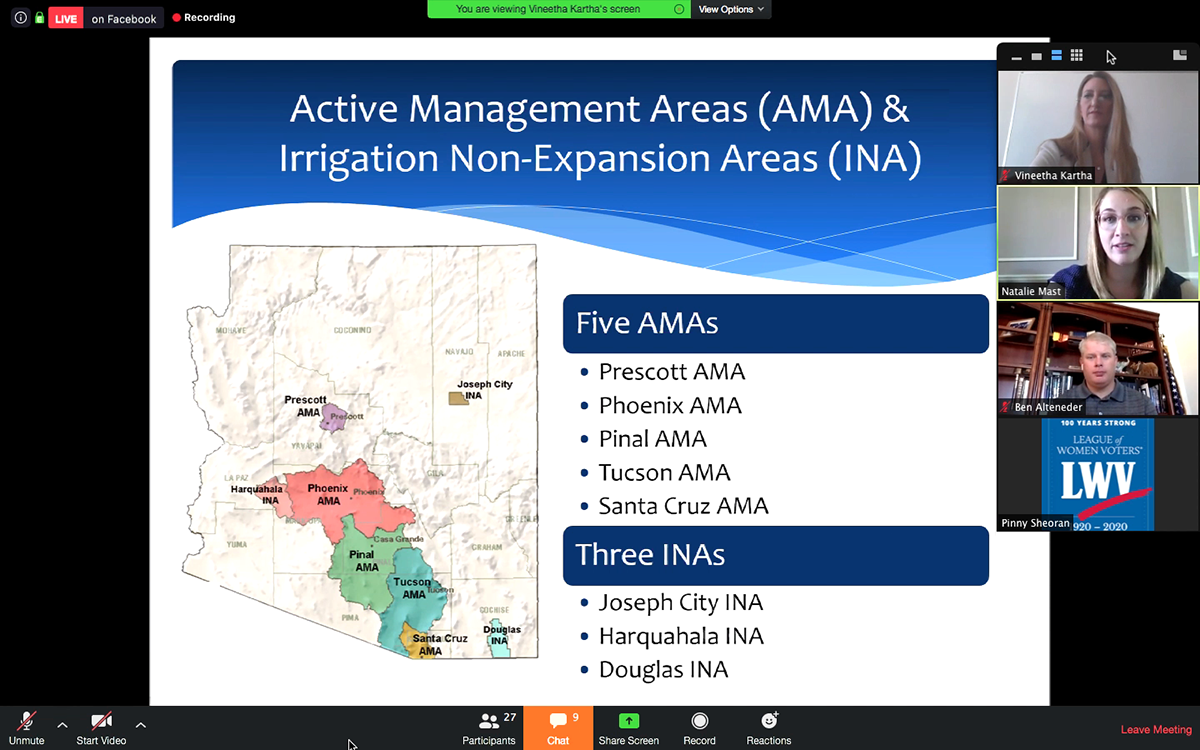 Still, if online “gatherings” are to be a primary means of sharing information, at least in the short term, Ms. Sheoran advises simple, inexpensive techniques for enhancing production values.

Regarding the sound, a webinar participant needs to be aware of ambient sound. Like assuring the kids won’t come running into the home office. “With so many parents having to work from home, these background issues need to be managed and addressed.”

So does well-positioned lighting that illuminates the webinar participant, rather than the cat lounging on the bookcase in the background.

(And, speaking of background, Ms. Sheoran has used a lush, intensely green photo from a recent trip to Ireland as a projected background in her role as moderator of League online webinars. It has a decided calming effect.)

And, then, there’s a little matter of dressing for the role.

“People say, ‘who cares what I look like?’ Well, yes! People do care! For us, it’s very important because we’re the League. Presence on camera is really important.”

In the longer run, a full-scale turnover to conducting presentations online is not likely in the cards,” said Ms. Sheoran. “I don’t want to push technology as a full solution.”

But in a time of social distancing, what works for the NFL can be useful for the rest of us, too.