Other than sunrise and sunset, the world provides precious few “sure things.”

So, maybe it was not an absolute sure thing that Arizona’s Drought Interagency Coordinating Group would recommend to the Governor that the State’s drought-emergency declaration should be extended once again. 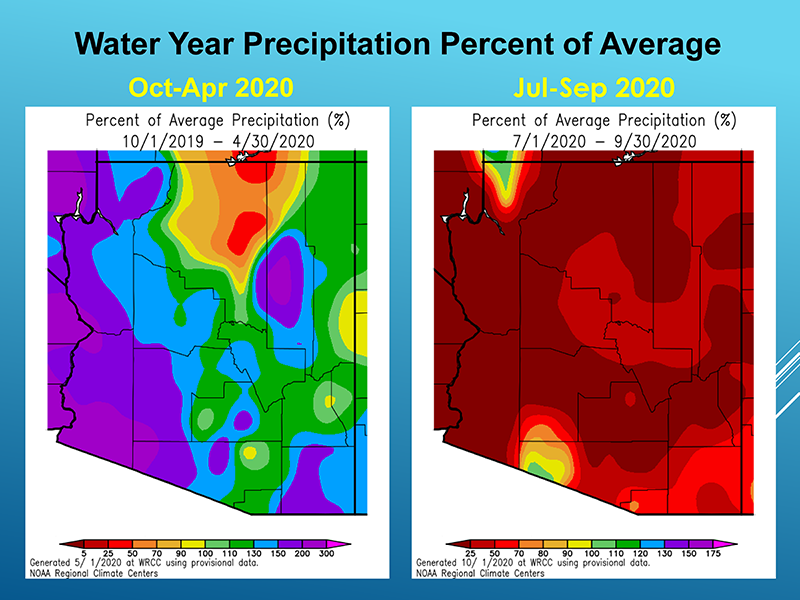 Maybe, despite our just-ended endless summer of record heat and a complete dud of a summer rainy season, there was a chance the ICG would end its lengthy string of drought-declaration recommendations.

There’s always a chance, right? Even after the Great Non-soon of 2020, the driest and hottest summer on record. Even as the Southwest is entering a winter season that is projected to be nearly as dry as its bone-dry summer.

At its fall meeting on Tuesday, November 10, the panel charged with providing expert analysis of the recent past and near-future of moisture in the Southwest concluded the available evidence is nearly indisputable: 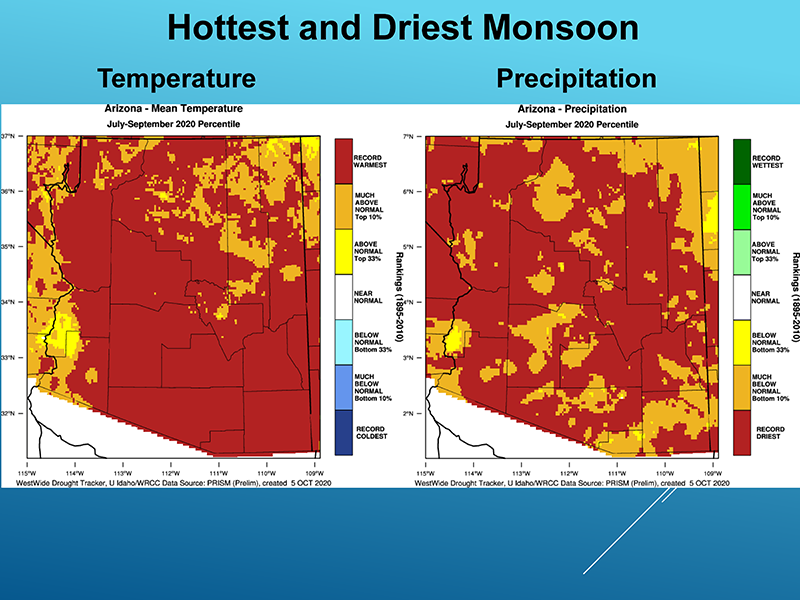 Arizona’s decades-long drought is not about to relent its grip any time soon. Certainly not before next spring.

It also concluded that, once again, it will draft a letter to the Governor declaring – in so many words – heck, yeah, we’re still in drought.

“It seems to me we should recommend the state keep the drought declaration,” said the panel’s co-chair, Tom Buschatzke, Director of the Arizona Department of Water Resources.

“I don’t see any light at the end of the tunnel that would lead us to the conclusion that the declaration should go away.” 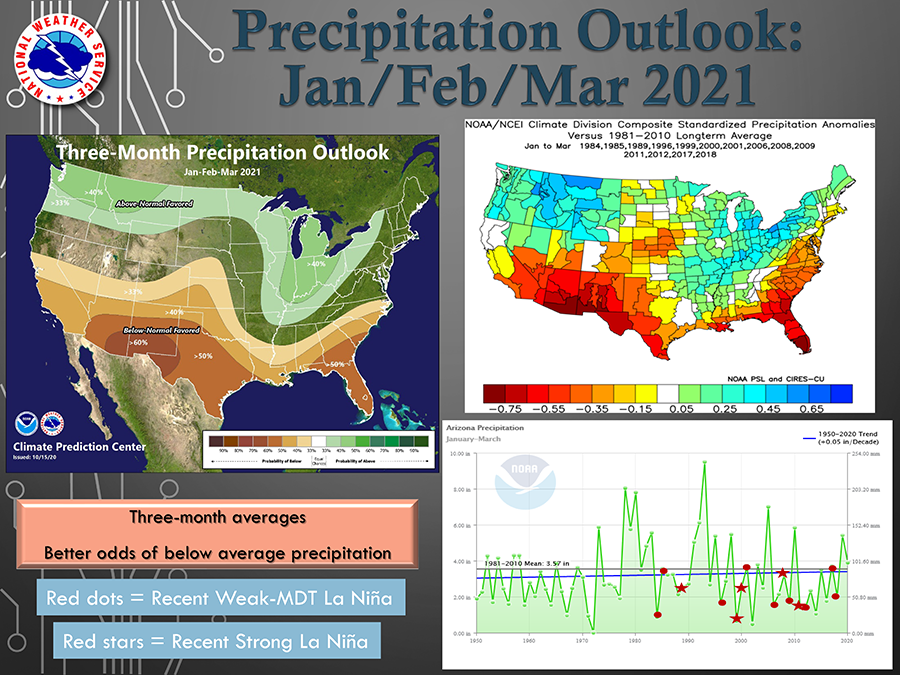 The ICG members agreed. “Not to belabor this, but my recommendation is to keep everything in place,” said co-chair Allen Clark of the Arizona Division of Emergency Management. “We’re a long way from being out of this situation.”

The Interagency Coordinating Group, or ICG, is an advisory body to the Governor on Arizona drought issues. Comprised of state, federal and non-governmental organizations, this group meets twice a year to evaluate drought conditions and consider recommendations to the governor. Arizona has had a Drought Emergency Declaration in effect since June 1999 and a Drought Declaration has been in effect since May 2007. 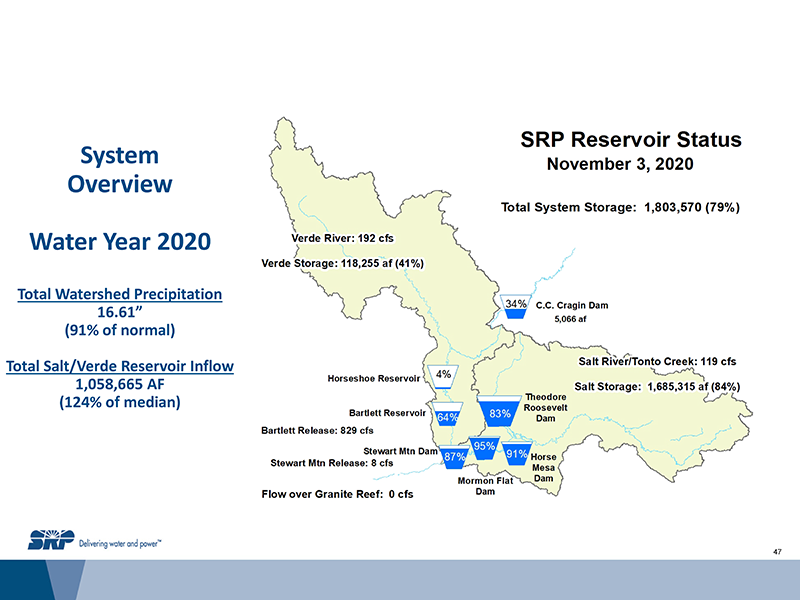 State Climatologist Nancy Selover presented maps that depicted the dramatic changes between Arizona’s most recent winter and summer precipitation levels, which swiveled rapidly from a mostly better-than-average winter in terms of moisture to the driest summer on record.

Mark O’Malley, lead forecaster for the National Weather Service in Phoenix, presented data indicating that a strengthening La Niña pattern in the eastern Pacific Ocean likely will prompt that dry trend to continue into next spring.

“La Niña already is well established,” said O’Malley. “It will go into spring before it deteriorates. We could be looking at a strong La Niña when all is said and done.” 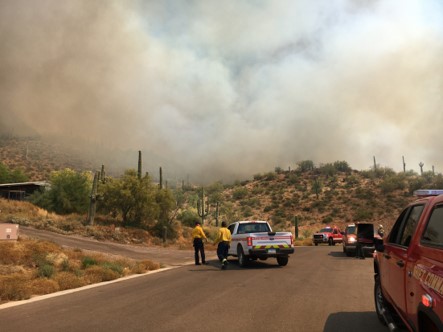 Nevertheless, he warned, the extremely dry soils in the watershed could impact runoff from the coming winter, absorbing runoff and, so, affecting streamflows.

Tiffany Davila of the Department of Forestry & Fire Management described one of the unfortunate consequences of a very wet winter followed by a record-setting dry summer: 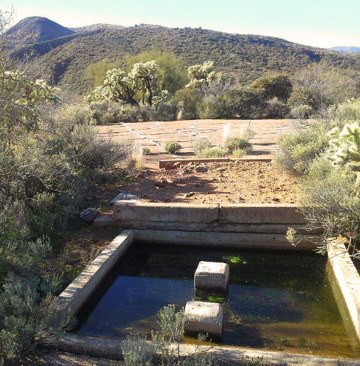 “The winter moisture contributed to an abundance of fine fuels,” she observed.

“Above normal spring temperatures impacted fine fuels – it dried out the fine fuels like grass and brush vegetation faster.”

Carlee McClellan of the Navajo Nation Department of Water Resources described the considerable challenges the Nation faced this summer as a result of the COVID-19 pandemic. And Dave Weedman of the Arizona Game & Fish Department described his agency’s challenges of hauling water to the State’s hundreds of wilderness water catchments.