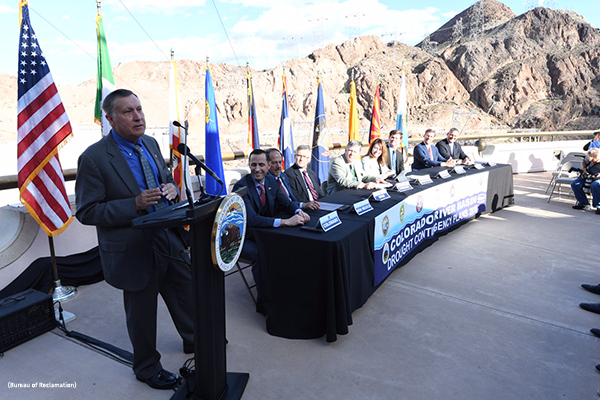 Nearly six years in the making, the system-wide Colorado River Drought Contingency Plan to protect the integrity of the drought-stricken river system is in effect.

On a near-perfect afternoon on the spacious Hoover Dam Observation Deck, representatives of the seven Colorado River states signed the long-sought DCP document. The agreement went into effect immediately after Tim Petty, Assistant Secretary for Water & Science for the Department of the Interior, completed his signing duties.

The DCP formalized the commitment of the states and the federal government to take collaborative action to protect and enhance the sustainability of the river system on behalf of the estimated 40 million people who rely on it.

Speaking on behalf of the Lower Basin States, Arizona Department of Water Resources Director Tom Buschatzke observed that he is “often asked why the DCP is so complicated.”

“The answer is that it is not easy to find ways to leave water in the river in the face of growing populations and thriving economies that demand access to more water,” said Buschatzke. 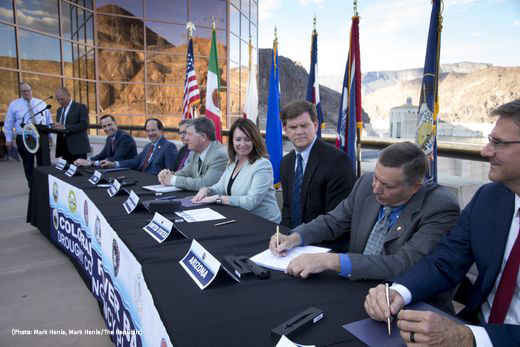 “It is not easy to achieve that outcome while respecting the unique rights of each State, various Tribes and (the Republic of) Mexico to Colorado River water.”

Brenda Burman, Commissioner of the Bureau of Reclamation, which operates the Colorado River system, also noted the multitude of partners in the DCP effort.

In a statement released shortly after the signing event, the Bureau pointed to the participation of Mexico, which agreed in 2017 to share in Colorado River allocation cutbacks according to a Binational Water Scarcity Contingency Plan. That agreement – a feature of Minute 323 to the 1944 U.S.-Mexico Water Treaty – took effect upon the adoption of the DCP.

“This is an historic accomplishment for the Colorado River Basin. Adopting consensus-based drought contingency plans represents the best path toward safeguarding the single most important water resource in the western United States,” said Commissioner Burman. 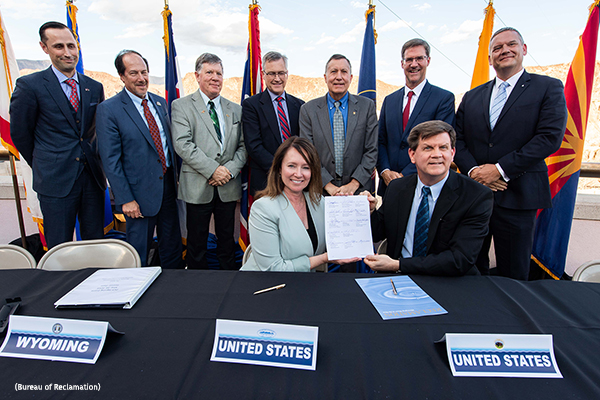 The Colorado River States began their serious negotiations to share potential delivery shortages on the river system in 2013. In late June of that year, then-Interior Secretary Sally Jewell identified water-conservation issues on the Colorado River system as one of the top priorities of her administration.

As a result of chronic over-use and a lengthy drought plaguing the Southwest, a set of “Interim Guidelines” established by the states in 2007 to protect water levels at Lake Mead were proving insufficient.

As the lone state in the Colorado River system to require legislative authorization to sign the DCP document, Arizona’s path to the May 20 signing was more arduous and complex than that of other states.

But, in the end, it also proved more satisfying. Upon the passage of legislation authorizing Director Buschatzke to sign the DCP document on May 20, Governor Doug Ducey called the measure “the most significant water legislation passed in nearly 40 years.”