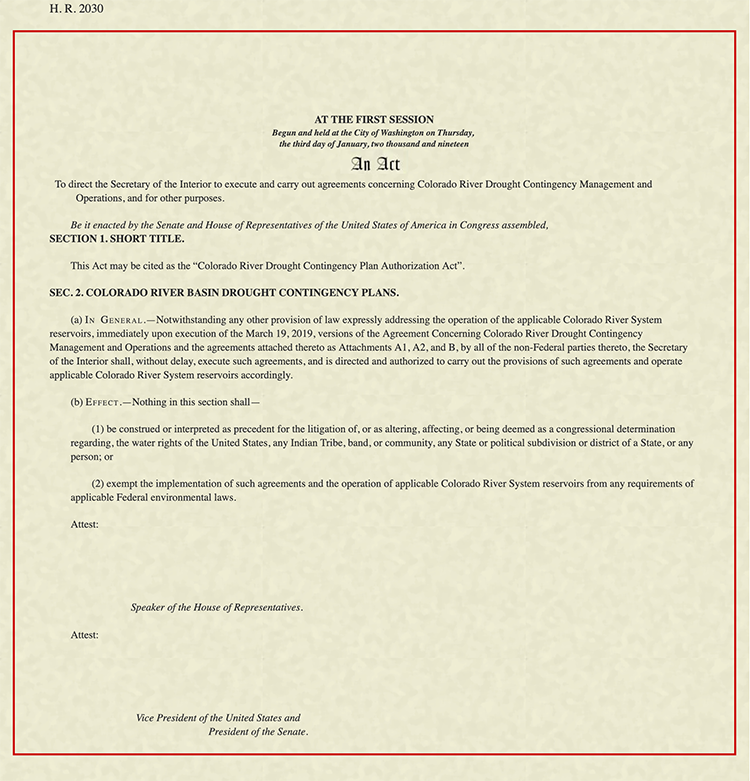 In the end, it was the bipartisan sense of urgency among lawmakers – the fast-building recognition on both sides of the aisle that this legislation needed the support of Congress -- that proved most stunning to observers.

The proposal to take federal action on behalf of the troubled Colorado River system morphed seemingly overnight into a legislative IndyCar powered by an astonishing level of bipartisan support.

Passed by Congress on April 8, the  Colorado River Drought Contingency Plan Authorization Act enjoyed the support of all 14 of the Colorado River Basin States senators, and was approved by acclimation by both houses.

The Act formally authorized the Secretary of the Interior to execute and carry out multiple agreements in relation to the Colorado River Drought Contingency Plan crafted by the Seven Basin States.

In the end, the nearly six-year negotiation process over a system-wide DCP came together fast.

On March 19, the designated representatives of the seven Colorado River Basin States governors jointly signed a letter to Congress, imploring members to act swiftly on legislation to help protect the Colorado River system from the effects of historic drought. 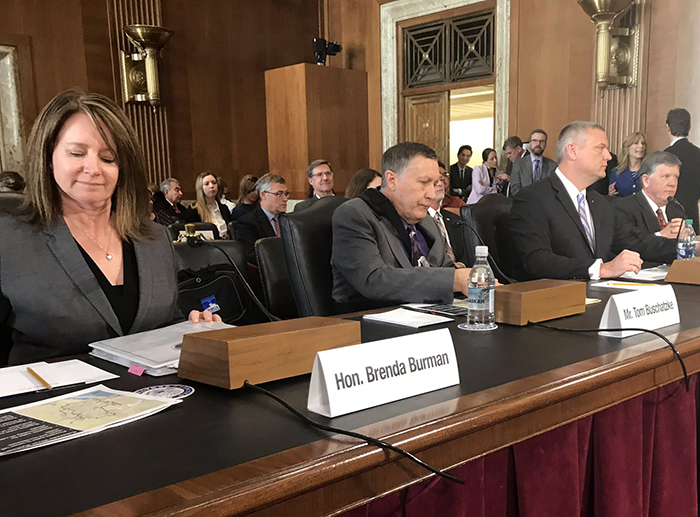 How those lawmakers did respond.

Less than ten days after signing that Letter to Congress at the offices of the Arizona Department of Water Resources, three of the Basin States governors’ representatives, including ADWR Director Tom Buschatzke, went before the relevant House and Senate subcommittees, defining the pressing issues and illustrating to the federal lawmakers the urgency of addressing them.

At every step of the way, Arizona lawmakers played key roles.

Buschatzke, John Entsminger of Nevada and Patrick Tyrrell of Wyoming were joined in the Senate hearing by Brenda Burman, Commissioner of the Bureau of Reclamation.

On Thursday, March 28, all seven of the governors’ representatives, again including Director Buschatzke, testified before the House Natural Resources Committee’s Subcommittee on Water, Oceans, and Wildlife. 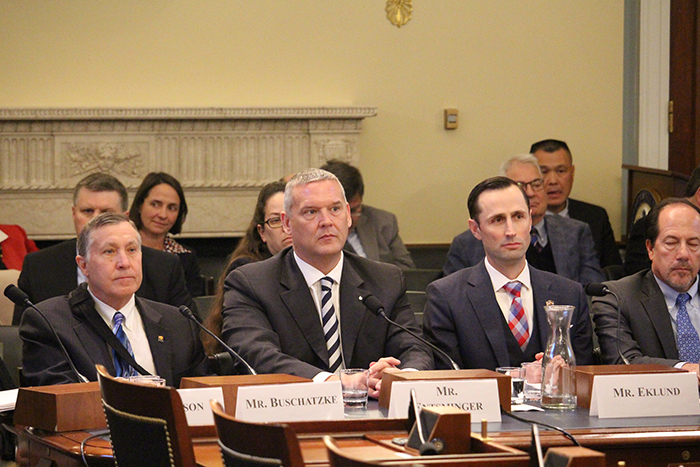 The Natural Resources Committee’s chairman, Arizona Rep. Raul Grijalva, declared shortly after the Thursday hearing that he would introduce a bill “with support from all seven Colorado River Basin States and regional tribes that authorizes the Colorado River Drought Contingency Plan.”

Sen. McSally had vowed at the Senate hearing a day earlier to do the same. Congressional gears were fully engaged.

Within eleven days, both chambers of Congress acted. In quick succession on Monday, April 8, both the House and Senate approved the legislation by acclimation and sent the Act to the President’s desk for his signature.

Just how was legislation affecting seven U.S. states, the Republic of Mexico and an estimated 40 million people in the Southwest able to zoom through a notoriously divided Washington, D.C.? 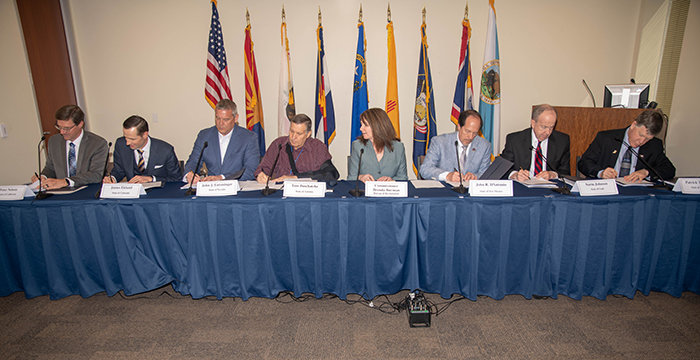 One oft-cited rationale was that the really difficult work already had been accomplished among the states prior to the sojourn to Washington, D.C. That hard work paid off on March 19 when the governors’ representatives of all seven states signed their Letter to Congress in ADWR’s offices.

“The last few weeks have been one of the most extraordinary periods in the history of ADWR and was a remarkable chapter in the long story of securing Arizona’s water supplies,” said Director Buschatzke, following the April 8 vote.

Gov. Doug Ducey: “Thank you to the entire Arizona delegation for working together and showing the country how to get things done. Let’s bring it home!”

Rep. Raul Grijalva: “This immediate action is essential to preserving the water supply for millions of people in the American Southwest.”

Sen. Martha McSally: “(B)y acting so quickly, the Lower Basin States will be able to immediately begin saving hundreds of thousands of acre-feet of water.”

Rep. Andy Biggs: “The Colorado River Drought Contingency Plan will provide certainty to Arizonans – and to residents from the Colorado River Basin states – as to what their water security will look like for future generations.”

Rep. Ruben Gallego: “The DCP is a model for how governments, tribes and stakeholders can work together on big issues. Proud to support this bipartisan plan!”

Rep. Paul Gosar: “I applaud Reclamation Commissioner Brenda Burman and Arizona Department of Water Resources Director Tom Buschatzke for all their hard work and leadership in bringing the Drought Contingency Plan together.”

Rep. Debbie Lesko: “It took a lot of hard work to get this plan to Congress, and I am pleased to see it pass the House of Representatives with such broad bipartisan support.”

Rep. Tom O’Halleran: “We must continue to do this conservation together and manage our rivers in ways that allow cities to grow, ensure farmers and ranchers are successful, and keep our obligations to Native Americans.”

Rep. David Schweikert: “The DCP is a great example of states working together to address extreme water challenges, without the federal government imposing a one size fits all solution.”

Sen. Kyrsten Sinema: “Today’s passage of the DCP legislation is a major milestone in securing Arizona’s water future. I’m proud to have worked tirelessly with Arizona stakeholders and Congressional colleagues to keep the DCP on track.”

Rep. Greg Stanton: “The importance of the Colorado River to the West and to my home state cannot be overstated.”

Rep. Ann Kirkpatrick: "...It is our responsibility to execute environmental policies effectively & efficiently for our families at home & our natural resources. I’m proud of the leaders that worked across state and party lines to get this done.”

U.S. Senate Majority Leader Mitch McConnell made the following remarks on the Senate floor regarding a landmark drought contingency plan for the Colorado River Basin