It’s touch & go: Strong snowpack season may not keep Lake Mead out of shortfall this year

It’s touch & go: Strong snowpack season may not keep Lake Mead out of shortfall this year

Strong snowpack season still may not keep Lake Mead out of shortfall this year
Published: March 6, 2019

Recent Arizona Water News reports have been making (figurative) snow angels over the impressive precipitation levels of the current winter-water season in Arizona and the rest of the Southwest.

Results have been encouraging. As of mid-February, for example, snowpack in Arizona’s Salt and Verde rivers watershed stood at 118 percent of normal – a far cry from the nearly non-existent snowpack of a year earlier.

All looked good. In fact, much better than “good” in many locations. As of early March, snowpack on the San Miguel, Dolores, Animas and San Juan River Basins of the Rockies was spiking to 131 percent of normal, representing an astonishing 250 percent improvement over the same period of 2018. 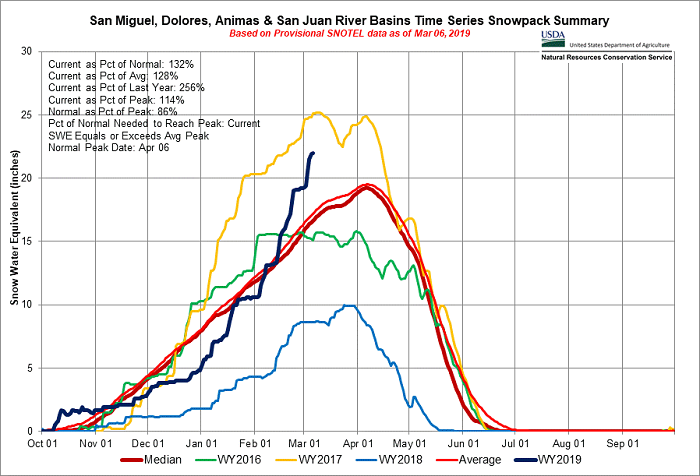 So with all those very positive snowpack vibes, the final unregulated inflow forecast with February precipitation for Lake Powell proved to be a bit… sobering.

According to the calculations of the National Weather Service’s Colorado Basin River Forecast Center in Salt Lake City, the observed unregulated inflow into Lake Powell for February was 256,000 acre-feet… just 65 percent of average.

If so, that declaration will prompt a first-ever shortfall in Arizona’s allocation of Colorado River water delivered through the Central Arizona Project canal system.

But, while the February report may have proved a bit disappointing, there was good inflow news too. The Center’s forecast also predicted that the improving snowpack conditions would improve inflow as well. It foresees inflow to Lake Powell of 69 percent in March. And 80 percent in April. And 96 percent of average in May.

Why the seemingly dismal February inflow to Lake Powell in the midst of a comparatively strong snowpack season? 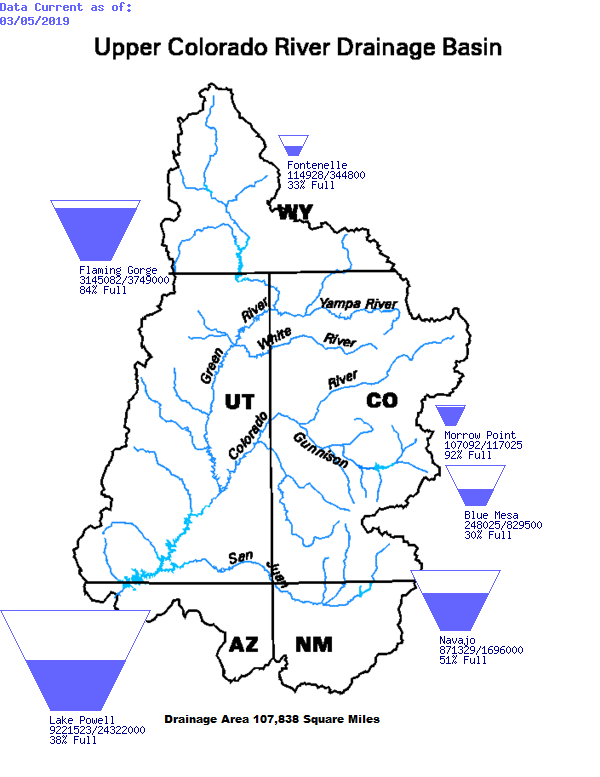 As ever, it was because runoff totals are a function of longer-term climactic conditions, not just current weather conditions. Dry conditions in the southwestern slopes of the Rockies last year created a lot of moisture-thirsty soil that – at least early in the winter season – drank up a lot of the system’s runoff.

Still, as noted, the Center’s projections of unregulated inflow into Lake Powell are improving. Which, in turn, is improving chances for larger releases into Lake Mead.

As of January 7, the unregulated inflow to Lake Powell was forecasted to be 6.98 million acre-feet for the 2019 Water Year – a dismal outlook that virtually guaranteed shortfall conditions at Lake Mead.  Since then, due to favorable winter storms, that value has increased.

With the improved hydrology, the Bureau of Reclamation’s February 24-Month Study raised its projection of release into Lake Mead to 8.91 million acre-feet, up from 8.625 million acre-feet projected in the January 24-month Study. Things were looking better. 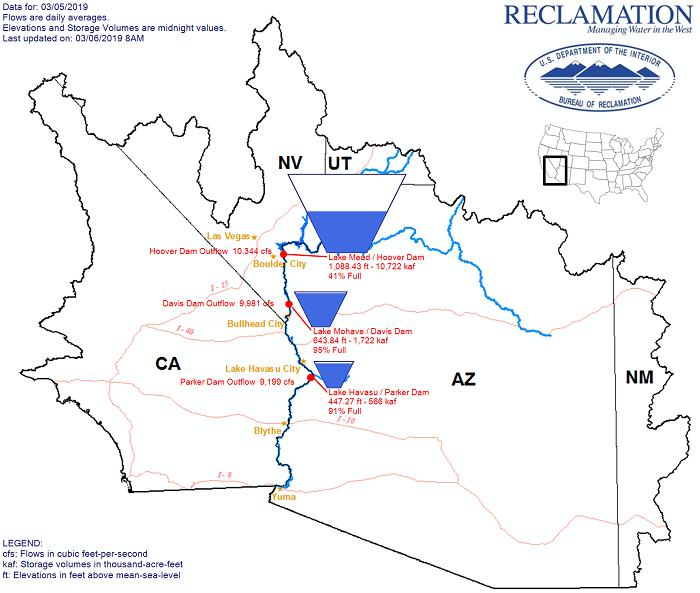 And still better. The Bureau’s latest forecast indicates that the April 24-month Study is likely to show yet another upward adjustment – this time to 9.0 million acre-feet being released from Lake Powell into Lake Mead.

Will that result in enough of a release from Lake Powell to Lake Mead to fend off a shortage declaration?

Alas, avoiding a shortage declaration, even with this season’s strong snowpack, appears unlikely.

With Lake Powell roughly 40 percent full, it appears unlikely that Lake Mead will see more than 9.0 million acre-feet from the upper reservoir this year. And that means a shortfall declaration remains probable.