In several respects, the big environmental winner this year in the Southwest has been in the realm of water.

The Rocky Mountains snowpack last winter was deep and cold, resulting in an excellent runoff into the Colorado River system. Likewise, California largely shrugged off its terrible struggle with drought as wave after wave of “atmospheric rivers” delivered deep moisture to the Sierra Nevada. 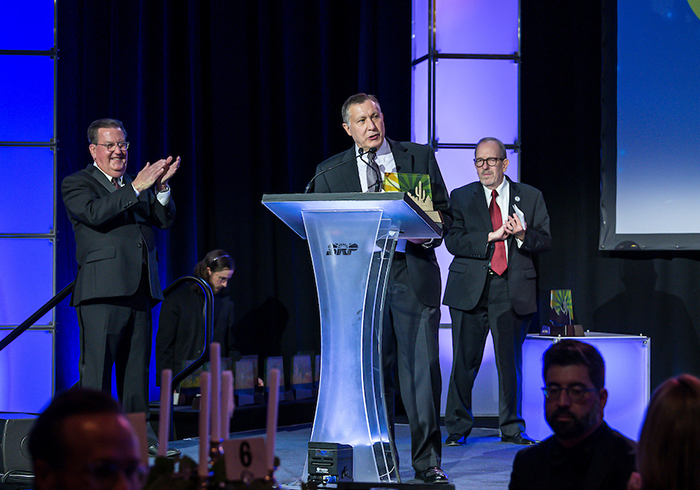 In terms of water-resource management, meanwhile, the Colorado River Basin States and the Department of the Interior signed the long-sought Drought Contingency Plans on May 20, a huge step forward for Colorado River system management.

Nowhere was the pursuit of a DCP more front and center than in Arizona, the only one of the seven Colorado River states that required legislative authorization to join in signing onto the DCP.

On the evening of September 21, at a black-tie gala at the Arizona Biltmore Resort, all that hard work by Arizona’s water-user community and its elected officials received a great nod of appreciation.

With over 650 people in attendance, Arizona Forward – one of the State’s leaders in promoting quality of life issues and sustainability – presented the Governor’s Award for Arizona’s Future to Arizona’s Drought Contingency Plan Process and the co-chairs of the effort, ADWR’s Director Buschatzke and Ted Cooke, General Manager of the Central Arizona Project.

In accepting his award, Director Buschatzke observed that Arizona’s Drought Contingency Plan process “was one built on collaboration, compromise and consensus and its success was the direct result of the tireless efforts of many in this room.”

He noted, too, that the DCP already was proving its value: “Its focus on stabilizing Lake Mead and creating incentives to “bank” water in the reservoir are already proving that DCP is already a success.”

The evening’s most prestigious award – the President’s Award, the top honor of all of the competition’s 93 submissions – went to the MAR 5 Gila River Indian Community Interpretive Trail.

The spectacular MAR 5 project combined the Tribe’s Managed Aquifer Recharge Site 5 and an interpretive trail that provides the community with a sustainable way to provide water for farming, materials for artisans to carry on their crafts, and educational classes to teach future generations, rejuvenating land that for decades had languished.

“It is an honor to have our Community recognized as a leader in Arizona for innovative water management and sustainability practices, as we are focused on addressing the ongoing drought and climate change,” said Gila River Indian Community Governor Stephen Roe Lewis.