Why an enormous, persistent arctic low-pressure system is helping dry out the American SW

Why an enormous, persistent arctic low-pressure system is helping dry out the American SW

Why an enormous, persistent arctic low-pressure system is helping dry out the American SW
Published: January 19, 2018

It’s… the blob. It came from above. And it’s got the world in its grip.

And… it’s not going anywhere any time soon.

If that sounds like a trailer line for a low-budget sci-fi movie… well, it could be.

But it also fairly describes the powerful “Strong Hudson Bay Low” – an Arctic-spawned low-pressure system that locked in place over much of the Northern Hemisphere in mid-November. The strong, static “blocking” system is showing no sign of releasing its grip any time in the foreseeable future.

“WITH SNOW CONDITIONS IN THE UPPER COLORADO RIVER BASIN TRACKING AT JUST 31 PERCENT OF THE TOTAL AVERAGE SEASONAL ACCUMULATION AS OF MID-JANUARY, THE 2018 SEASON IS LOOKING DRYER THAN THE RECORD-DRY 2002 SEASON.”

And neither is one of the stronger regional effects of the huge low-pressure system:

An equally persistent, equally strong high-pressure ridge has locked into place beneath the blob. It sits in an equally unyielding “blocking” pattern over the eastern Pacific and the southwestern U.S., which is driving the west-east jet stream and its storms well to the north of the parched American Southwest. 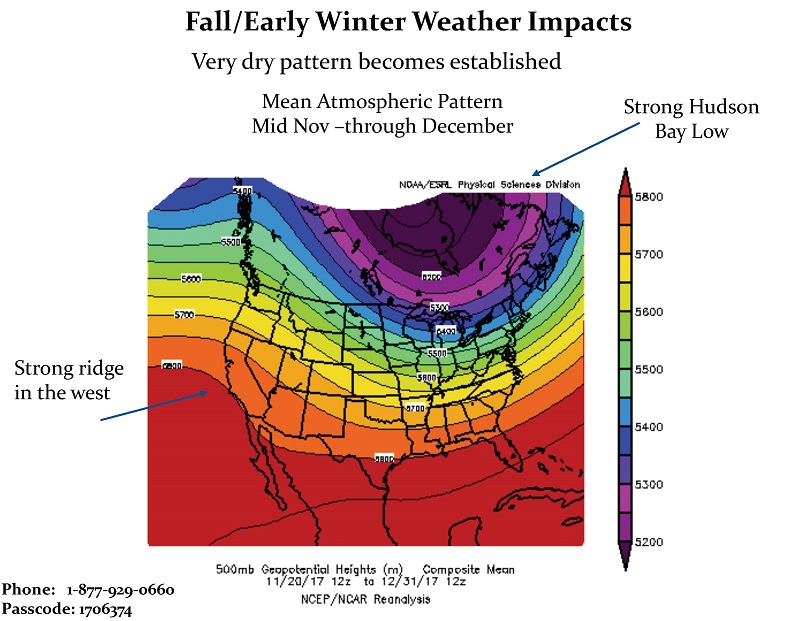 That strong high-pressure system is proving to be a virtual mirror image of the Strong Hudson Bay Low, driving temperatures dramatically up and sapping the atmosphere of moisture.

“How strong and permanent it becomes depends on establishment of other high- and low-pressure systems as well as the amplitude of the jet stream around the globe,” explained Greg Smith, a senior hydrologist at the Colorado Basin River Forecast Center, a division of the National Weather Service and the National Oceanic and Atmospheric Administration.

Coming at the time of year when the western slopes of the Rocky Mountains typically build snowpack that, come spring, provides run-off into the Colorado River system, the moisture-robbing effects of this static high-pressure system may prove to be record-setting.

So too might the effects of the Artic blob.

On January 2 in the U.S., at least one location in all 50 states recorded temperatures below freezing. Yes, even in Hawaii. 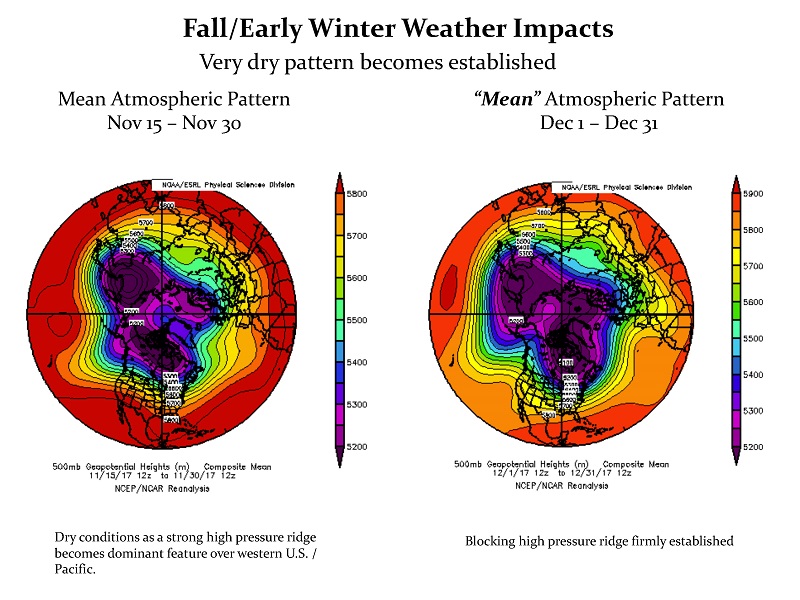 Water fountains in Florida froze over. Off-shore, sharks swimming near Cape Cod froze to death. And all that occurred before the infamous “bomb cyclone” drove temperatures deeply negative on the entire East Coast for nearly a week.

On the opposite side of the globe, meanwhile, it’s the same deal. The Arctic blob has much of the eastern side of the Northern Hemisphere frozen and snow-bound, too.

In Yakutia, Siberia – 3,300 miles east of Moscow – residents reported their eyelashes freezing as temperatures dropped to an astonishing 88 degrees below zero Fahrenheit. In southwestern Scotland -- typically cold and wet in the winter -- blizzard conditions shut down highways. And shipping on the normally blue Danube – for now, icy gray – was halted because of ice.

All weather patterns being inter-related with all other weather patterns, the powerful high-pressure ridge sitting over much of the southwestern U.S. built up around the same time as the Strong Hudson Bay Low gathered its global steam – in mid-November.

And like its Hudson Bay “polar” opposite, there it has remained. And remained. Strong. Resolute. And dry. 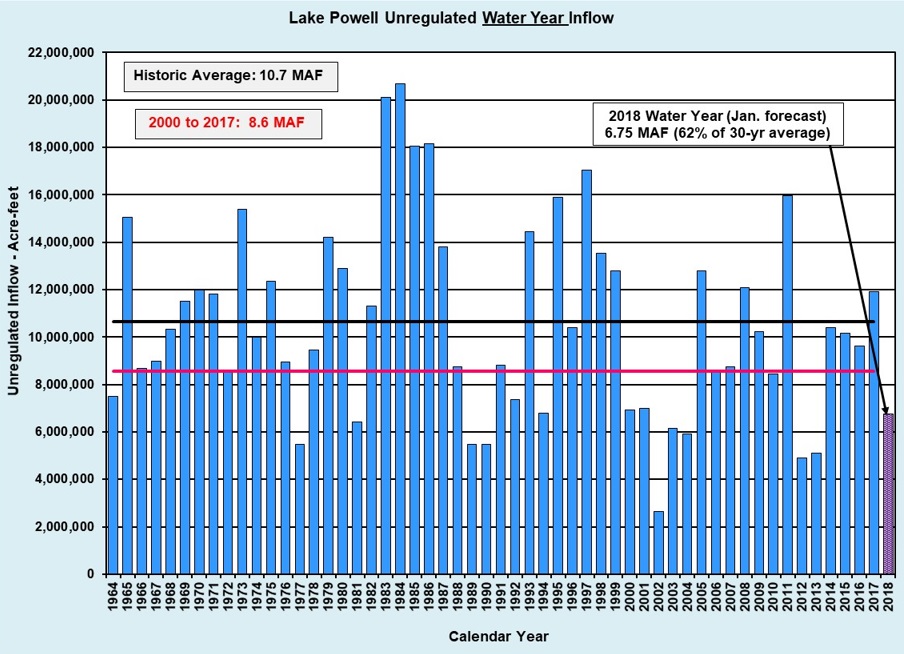 While neither strong low-pressure systems that sweep down from the Arctic nor high-pressure ridges laying out over the western U.S. are unusual at this time of year, these systems are unique in one important respect: their persistence. They won’t quit.

The high-pressure ridge has proved so persistent – and the conditions it creates so dry – that hydrologists at the Forecast Center now are comparing this season’s snowpack in the Rockies (as well as in the Arizona mountains) to that of the infamously dry winter of 1976-1977, which produced one of the lowest inflows into Lake Powell on the Colorado River system on record.

How low did that inflow go?

The fall-winter “water year” season that ended in 1977 produced an unregulated Colorado River inflow into Lake Powell of roughly 5.8 million acre-feet. That is almost three million acre-feet less than the average river flow into Powell since 2000, a period when much of the Southwest, including Arizona, has been locked in chronic drought.

Measured against the historic average since 1964, the 1977 inflow into Powell was almost five million acre-feet below average. Since 1964, only three seasons have provided less runoff than 1977.

“What drew us to the comparison (with 1977) initially was the snow situation,” said Smith. 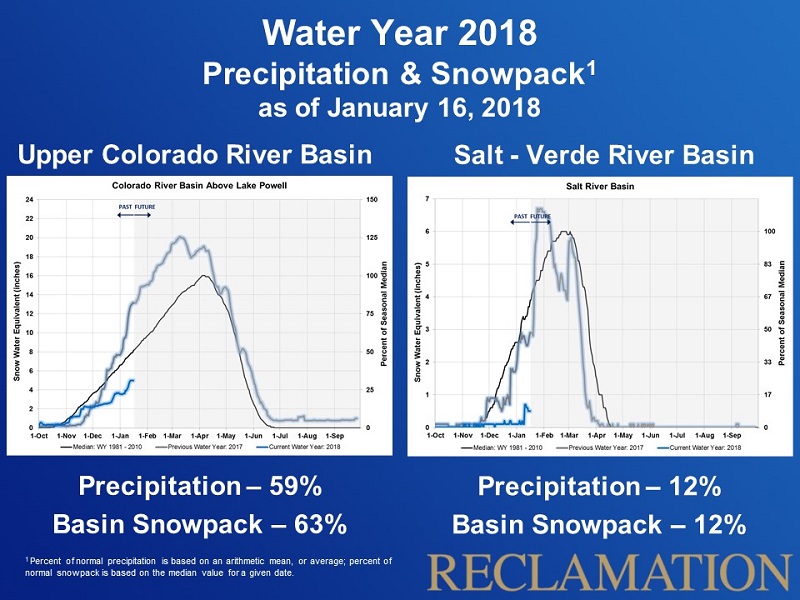 The Forecast Center’s highly advanced “SNOTEL” (for “snow telemetry”) network indicated that many of the Colorado River Basin’s snowpack areas, especially in the southern regions, were experiencing the “lowest snow on record,” according to Smith.

To Smith and other hydrologists, the atmospheric patterns prompting the weak snowpack seemed familiar:

“Some of us recall how poor conditions were in 1976-77. Then we noticed these large atmospheric features -- strong low in the east and ridge in the west -- were similar.”

Added Smith: “These are not uncommon features from year to year. But in both 1976-1977 and this year they were fairly strong, and the jet stream flow in the atmosphere similarly had a high amplitude. These strong low- and high-pressure systems, known as blocking features, or a blocking pattern, can be quite stubborn.”

As it stood in mid-January, the estimate for unregulated inflow into Lake Powell from the western slopes of the Rockies indicated the lake would receive 6.75 million acre-feet of runoff, or 62 percent of the historic, 30-year average. Not good, obviously. But not historically bad.

That estimate may be changing, however. And not for the better. 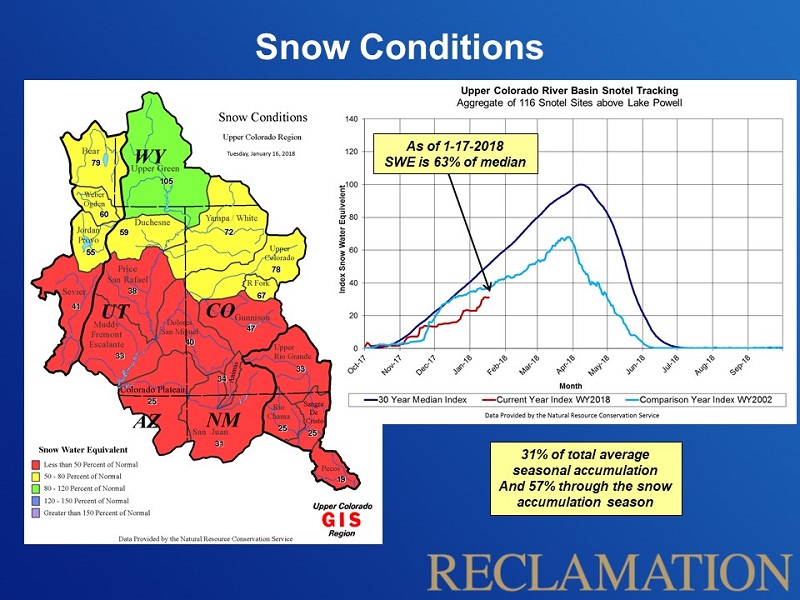 The lowest Colorado River inflow into Powell ever recorded was about 2.3 million acre-feet in 2002.

With snow conditions in the Upper Colorado River basin tracking at just 31 percent of the total average seasonal accumulation as of mid-January, the 2018 Water Year season – at this point in time -- is looking dryer than the record-dry 2002 season.

A “snapshot” chart recently released by the federal Bureau of Reclamation compares the current water-year snow conditions with Water Year 2002. As of January 17, which is 57 percent through the snow-accumulation season, snow conditions were tracking well below conditions in 2001-2002.

Weather changes. The “blocking” low- and high-pressure systems could weaken and dissipate. And we are still relatively early in the snow-accumulation season. The very dry mid-January snapshot of conditions could look very different by mid-February.

As Smith notes, the 1976-1977 pattern finally broke down in March 1977, ushering in a much wetter late-winter period, especially in the northern Colorado and Great Basins.

As our days of unnervingly pleasant sunshine and annoyingly dry, easy breezes drone on – and on – the prospects for matching (or, gulp, “besting”) the Great Colorado River Dribble of 2002 increase.

But, again, as the forecasters well know, weather changes. Even the extraordinarily dry winter of 1977 ended pretty wet.