Not by much: Colorado River system to stay out of shortfall status through 2019

Not by much: Colorado River system to stay out of shortfall status through 2019

Not by much: Colorado River system to stay out of shortfall status through 2019
Published: August 17, 2018

As news reports have indicated, the “August 2018 24-Month Study” of the Colorado River system, released Wednesday by the Bureau of Reclamation, tells at least two big water stories for the Southwest.

For one, it illustrates that the Lower Basin will not be in a shortage for 2019. According to the Bureau’s “most likely” scenario, Lake Mead will finish 2018 about four and a half feet above the “shortage declaration” cutoff, which is 1,075 feet in elevation.

A shortage declaration would trigger a set of criteria in the 2007 interim guidelines calling for Arizona’s deliveries of Colorado River water to be reduced by 320,000 acre-feet.

In addition to those anticipated conditions – inspired, largely, by decades of drought and a chronic structural deficit in annual Lower Basin deliveries – the 2018 August study tells us much about the complex relationship between the system’s two great reservoirs, Lake Powell and Lake Mead. 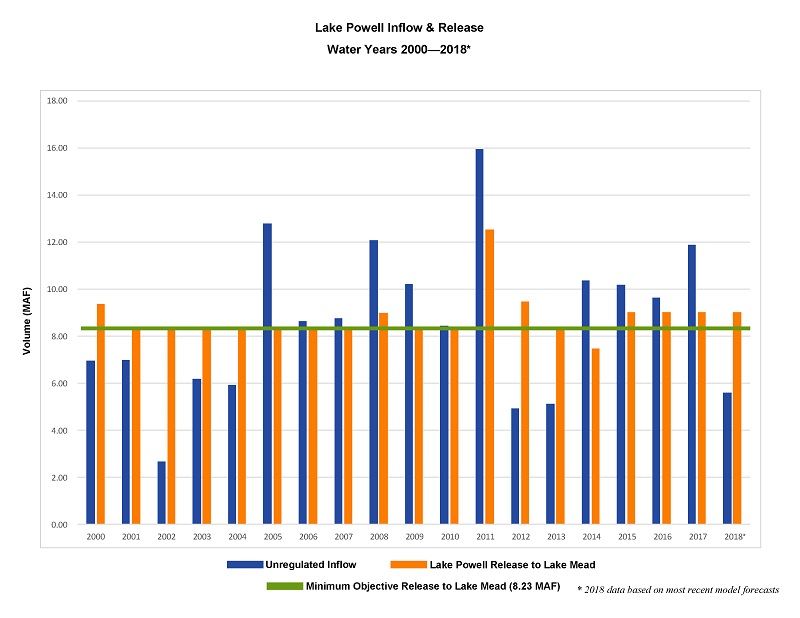 Much attention is being paid to the very unstable conditions at Lake Mead. But Lake Powell’s capacity to release water to Lake Mead also is governed in part by its elevations. And while those elevations are not currently in the critical condition of Lake Mead, they still are concerning. As of mid-August, Lake Powell’s elevation stood at just above 3,600 feet, which is about 48 percent full, down nearly 33 feet from a year ago.

Unregulated inflows into Lake Powell from the Rocky Mountain watershed have been (at worst) weak to (at best) near normal every year since the monster 2011 snowpack season that delivered 16 million acre-feet of inflow into Powell. The average annual inflow since 2011 is about 8.3 million acre-feet, which is 2.5 million acre-feet less than the long-term average.

Despite the prevalence of highly variable and lower than average watershed runoff in the years since 2011, the Bureau has released an amount in excess of 8.23 million acre-feet to Lake Mead five of the last seven years. And, according to the Bureau’s River Operations Group, conditions call for another release of 9.0 million acre-feet into Lake Mead in 2019. 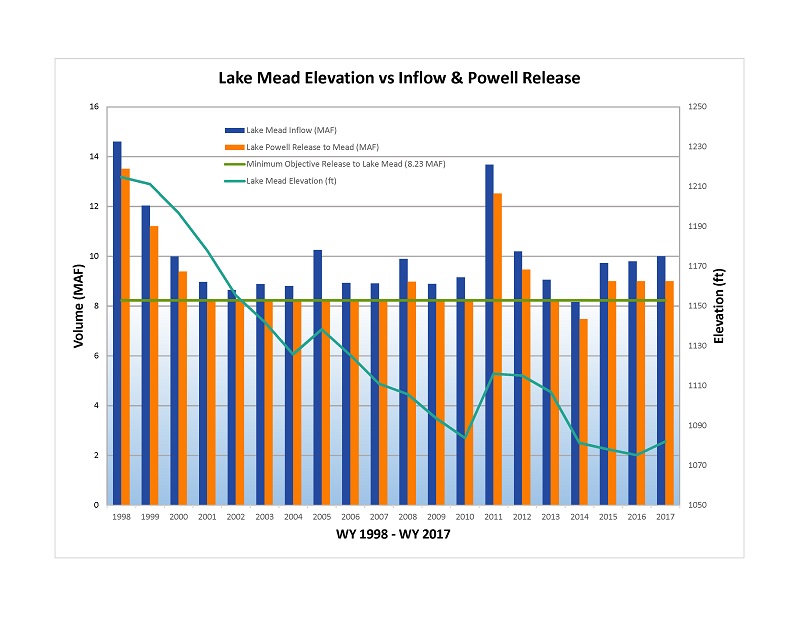 That pattern appears set to change in 2020.

Prompted by the projected weak runoff forecast in the Rockies for Water Year 2019 – which is 75 percent of the long-term average runoff – the Lower Basin may see a water release to Mead of as little as 7.48 million acre-feet in 2020.

That would represent only the second time that less than 8.23 million acre-feet has flowed from Lake Powell to Lake Mead.

Assuming that dismal outlook comes to pass, it couldn’t come at a worse time.

Analysts are forecasting Lake Mead to end 2019 at just 1,070 feet, or five feet below the “Tier 1” shortage trigger. That anticipated elevation is just 20 feet above the “Tier 2” shortage stage (1,050 feet in elevation). If reached, that milestone triggers still more delivery cutbacks of Colorado River water through the CAP canals.