By 2003, evidence that the Southwest was locked into a lengthy period of drought was building fast.

Starting in the mid-1990s, snowpack on the western slopes of the Rockies – the source of runoff that finds its way into the Colorado River -- was found to be below normal more often than not. Annual flow of the Colorado in 2002, as measured at Lee’s Ferry, proved to be one of lowest on record since 1906.

In Arizona, drier-than-normal winters were proving commonplace by 2003. As a result, the state’s leadership decided it was time to begin assessing drought conditions in the State annually and to begin reporting the steps being taken to deal with it.

Thus began the Arizona Drought Preparedness Plan, an assessment of the State’s hydrologic conditions adopted in 2004 and in continuous implementation since 2006. 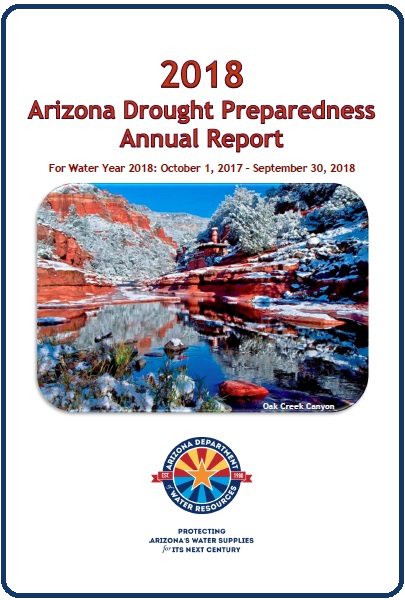 A Drought Emergency Declaration has been in effect in Arizona since 1999.

The current declaration was issued by the Governor in June 1999 and has continued by executive order since then. The declaration maintains the State’s ability to provide emergency response, if needed, and enables farmers and ranchers to obtain funding assistance if they experience significant production losses due to drought.

Each year, the Arizona Department of Water Resources (ADWR) prepares a report on the State’s drought-preparation progress based on updates from the Governor’s Drought Interagency Coordinating Group, Drought Monitoring Technical Committee, Local Drought Impact Groups, and others.

As the report illustrates, it’s dry out there.

The consequences? They were exactly what one would expect.

Below average streamflow was observed throughout much of the Colorado River basin during water year 2018 (October 1, 2017 – September 30, 2018). Elevations in the two main reservoirs of the Colorado River system, meanwhile, dropped. Lake Powell decreased by more than 36 feet and Lake Mead dropped by 3.71 feet.

Streamflow within Arizona watersheds were even worse.

In 2018, the Salt River and Verde River watersheds experienced the lowest winter runoff season (January-May) on record, dating back to 1913, with only 100,000 acre-feet of inflow. As a result, Roosevelt Lake saw little to no increase in storage, remaining at approximately 58 percent throughout the winter.

At least the monsoons of Water Year 2018 proved productive. The 2018 monsoon season lasted longer than usual with the remnants of two hurricanes bringing heavy rainfall to Arizona in early October. Monsoon rainfall was much wetter than average in central and western Arizona, although the eastern-most counties were drier than normal.