Breaking News Flash: Latest numbers on the Colorado River’s water supplies are out!

Breaking News Flash: Latest numbers on the Colorado River’s water supplies are out!

The data are in for February’s moisture production in the Colorado Basin – the vast, mountain regions stretching from central Wyoming to beyond the Mexican border.

The regions encompass the mountain slopes that produce most of the Colorado River flow, which in turn provide nearly 40 percent of Arizona’s water supply.

And the conclusions? Sort of like a Monet reproduced on onion skin: Pretty, but not even paper thin. 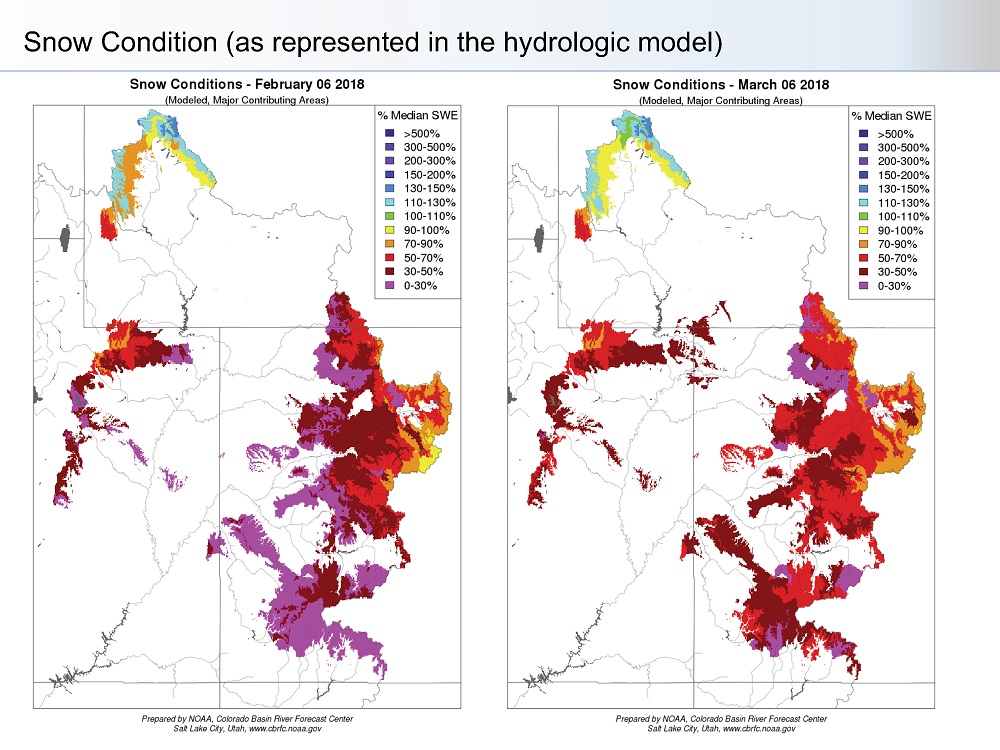 According to the latest Colorado Basin River Forecast Center briefing, February storms produced some of the most active weather patterns the southern regions of the western Rockies have seen all winter.

They improved the snowpack in important areas of the Rocky Mountains like the Gunnison and Dolores basins. The center reported that southwestern Colorado, for another example, received near-to-above average precipitation for the first time in several months.

But in terms of their impact on this near-record-dry winter? Meh. With few exceptions, many regions still range from quite poor to historically poor in terms of snowpack.

Worse still, it is getting late in the snowpack season to be anticipating any dramatic turn-arounds, such as the one experienced in the Dolores River basin in 1995, when a powerful late-February-early-March storm sent snowpack numbers there skyrocketing.

At this point in the season, the chances of a super-storm or two saving our snowpack bacon dwindle as the days pass. While there is some expectation of additional precipitation occurring mid-March, the operative word for the season overall appears to be… dismal. 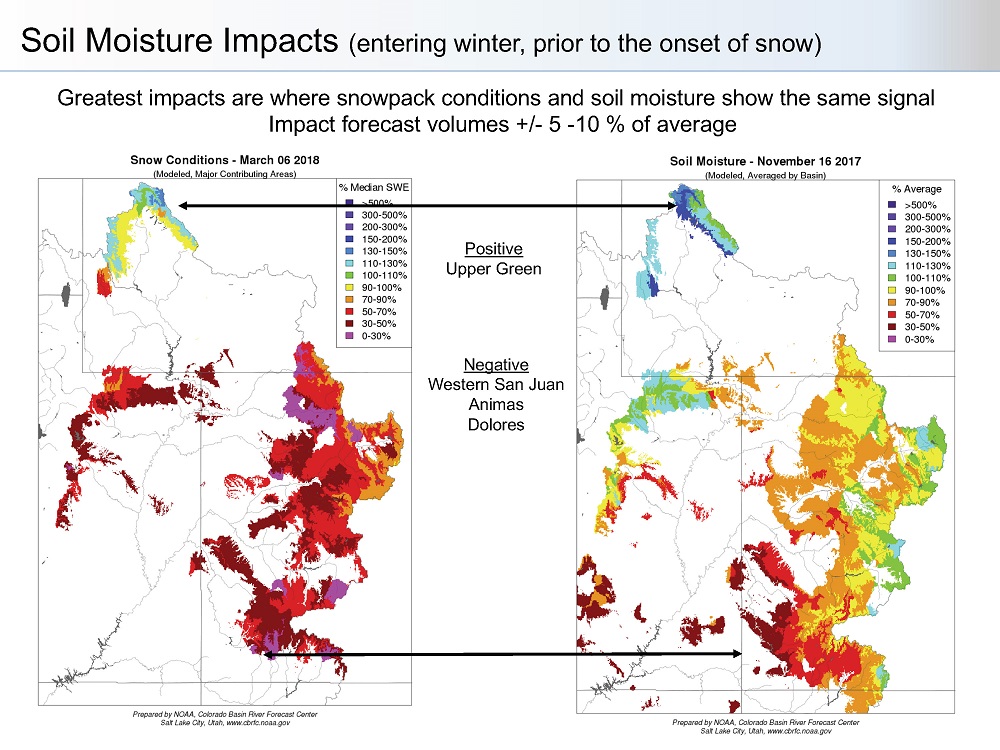 “Storms have started to bring precipitation to certain areas,” said Greg Smith, senior hydrologist at the Forecast Center, during the March 7 briefing. “Not all areas, but some in areas where we hadn’t done too well previously.”

Still, he said, the season averages, especially in the system’s southern regions, have been so dry that a moderately moist February could do little to make up the difference.

For Arizonans, the report notes the obvious: The majority of the Lower Colorado River Basin including Arizona and New Mexico has seen below average precipitation “dating back to July 2017.”

The Salt and Verde watersheds, for example, saw little more than trace moisture from October through December, and just half its average precipitation in January. So, while the storms that brought 80 percent of average moisture in February were nice, they scarcely made a dent in the parched season overall. 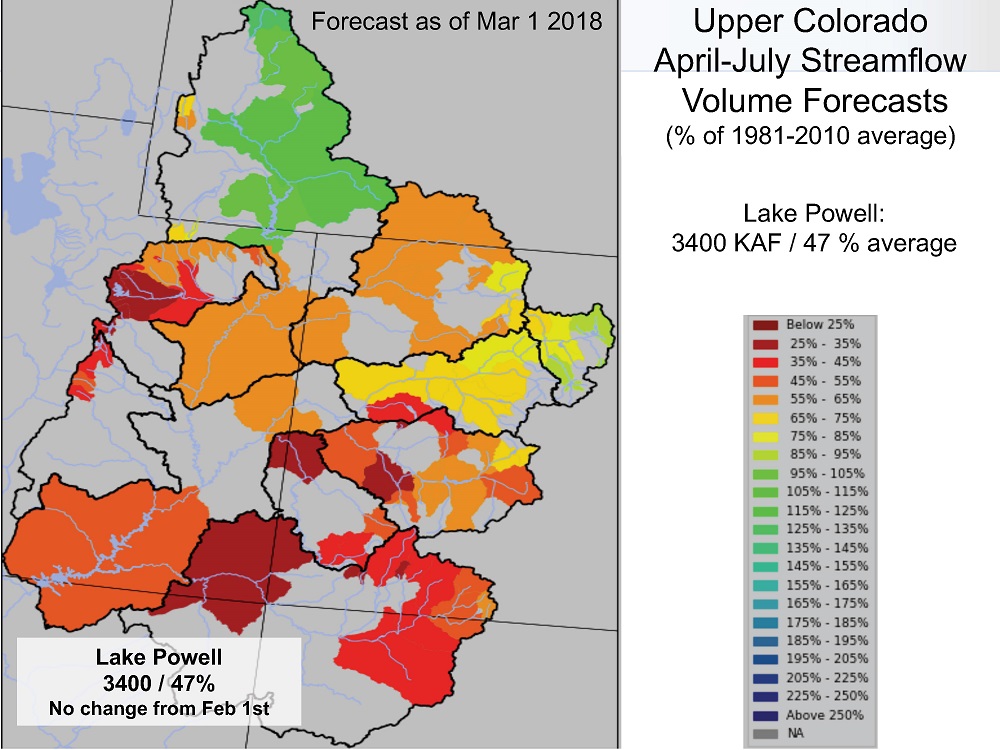 For purposes of runoff into the Colorado and its tributaries, the key factor now is soil moisture in the watershed: Is the soil sufficiently saturated that any late-winter storms might help produce meaningful runoff?

In many regions, it appears the answer is no. The report concludes that “precipitation events are unlikely to product significant runoff initially,” especially since “climatology indicates drier period ahead.”

The money question for Lower Basin water managers is: How much runoff can we anticipate flowing into Lake Powell, which is the beginning stage of the system that distributes Colorado River water among the Lower Basin states of Arizona, Nevada and California, as well as Mexico?

As of March 7, the anticipated Lake Powell inflow during the April-July runoff season stands at 47 percent of average, with about a three percent chance of reaching average inflow at Powell.

“While we’re glad to see the improvements, we still have a long way to go.”

Grab and drag the slider to compare the before (left) and after (right) satellite images of the snowpack across the western United States. So far in 2018, snow levels have been below average and much lower than 2017. Suomi VIIRS satellite images from the NOAA Environmental Visualization Laboratory.