It is high season once again for one of ADWR’s most important duties – collecting data on groundwater levels by the department’s Basic Data Unit.

The staff of the “BD Unit,” as it is known, will be fanning out across the State to measure water levels in wells, measure discharge from pumping wells and collect well inventories. 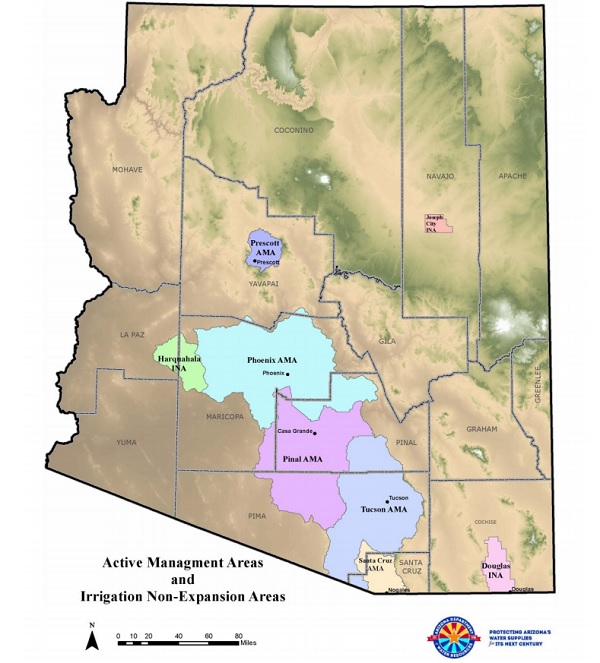 Each year as the weather cools, the hydrologists and water-resource specialists of the BD Unit conduct their research on 1,700 wells around Arizona that are known as “index wells,” which are wells that are measured each year through the “index line” program.

Index-well data collection begins October 22 and will continue through March.

In addition, the Unit will be focusing their efforts on a pair of “sweeps” of wells in regions that the Department has identified for enhanced data collection.

Sweeps typically are conducted in areas where hydrologists determine a need to collect additional data. Generally, those are areas of the state subject to rapid change, such as developing areas or areas sensitive to environmental change.

The first of those “sweeps” will include wells in the Pinal Active Management Area, which the team will measure beginning in December and continuing through January 2019.

Beginning in February 2019, the BD Unit will conduct a sweep of wells in the San Pedro Basin. That sweep will continue through March of next year.

The BD Unit has been the groundwater data-collection arm for Arizona since there was an ADWR.

Patterned after similar data collection units in the United States Geological Survey (USGS), the unit collected groundwater data on behalf of the Arizona Water Commission, ADWR’s predecessor agency prior to the Department’s creation in 1980.

ADWR adopted its data-collection protocols from the USGS, including field inventories, water-level measurement, water-quality sampling and discharge measurement. This enabled the data that ADWR collected to have instant compatibility with all of the USGS’s historical data.

ADWR uses the information gathered from well measurements to develop water level maps and to support scientific, planning, and management studies of each basin’s aquifer system.

Personnel from ADWR’s Field Services Section (of which the BD Unit is a part) are in the field year round. During summer months, they conduct their field work in various parts of the state depending on Department data collection needs. But the lion’s share of the Department’s field work, especially in the State’s desert regions, is conducted in the off-summer months as demand for groundwater is down and static water levels can be taken.