Beginning the week of February 5, Arizona Department of Water Resources (ADWR) will be making an extensive effort to measure water levels in wells in the Northwestern Region Basins of Arizona.

These measurements are being conducted as part of ADWR’s annual and periodic basin-wide water-level data collection program, which measure groundwater levels throughout the state.

Each year, the Department targets at least one area of the State for such “sweeps,” which are intended as a “deep dive” into regional groundwater conditions.

Data from the water-level survey provides valuable information on hydrologic conditions in the aquifers of the area.  ADWR personnel will be in the Northwestern area conducting water level measurements for approximately 3 to 4 weeks.

Every year the Department’s hydrologists collect water levels in a statewide network of about 1,600 to 1,800 “index” wells that have typically been measured annually over the last several decades.

There are roughly 51 index wells measured annually and 7 with daily water levels from automated monitoring sites in the Northwestern basins, which include the Hualapai Valley, Sacramento Valley, Detrital Valley and Meadview basins.

The Department last conducted a “sweep” in the region, known in planning terms as the Northwest Planning Area, in January-February 2006.

As noted below, the involvement of well-owners in “sweeps” is entirely voluntary. ADWR greatly appreciates the cooperation of well owners who participate in the well survey. 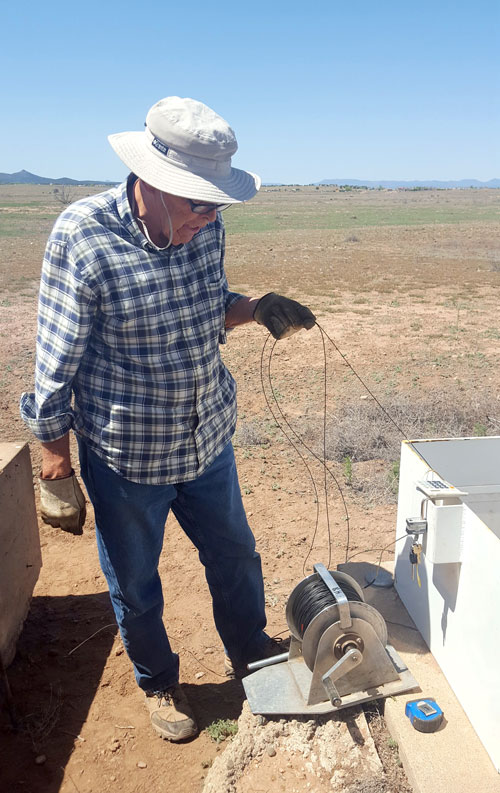 What will the ADWR do with the data?

The department uses the information from the basin survey to develop water level maps to support scientific, planning and management studies of the basin’s aquifer system.

What if well owners don’t want the ADWR measuring their well depth?

Participation and cooperation with the department’s basin survey is entirely voluntary.

The data collected from basin surveys has proved valuable to property owners and lessees just as much as it is to state and municipal water planners.

Why here? And why now?

Historically, the department measures its index wells in the Northwestern Region Basin area in the late winter/early spring. During this time, the water levels in the aquifer have typically recovered from the previous summer “pumping” levels and represent a more “static” condition which gives a more representative picture of what’s happening with the aquifers in the area.

Do well owners and lessees get to review the data?

Data collected will be made available by early to mid-summer 2018 via the Department’s Ground Water Site Inventory (GWSI) database at azwater.gov - Data Center.