Satellite-based tech employed by Arizona Water Resources has found more than 3,400 square miles of land subsidence in the state 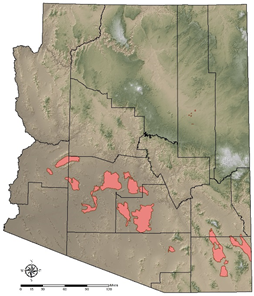 Arizona is sinking. Well, not all of Arizona, just certain groundwater basins in south-central and southern Arizona. Subsidence is a nation-wide and world-wide problem; subsidence as great as 19 feet has occurred since the 1950s in the areas near Luke Air Force Base and the Town of Eloy.

In Arizona, land subsidence has produced 167 miles of mapped earth fissures, according to data provided by the Arizona Geological Survey (AZGS). Fissures frequently damage infrastructure: roads, canals, pipelines, railways, buildings, and highways. Land subsidence also has changed the natural drainage slopes, causing areas to flood that hadn’t flooded in the past. It has reversed flood control canals, changed aquifer properties, and led to the permanent loss of groundwater storage due to compaction. ADWR has detected more than 3,400 square miles of land subsidence (see: subsidence areas in salmon, above). 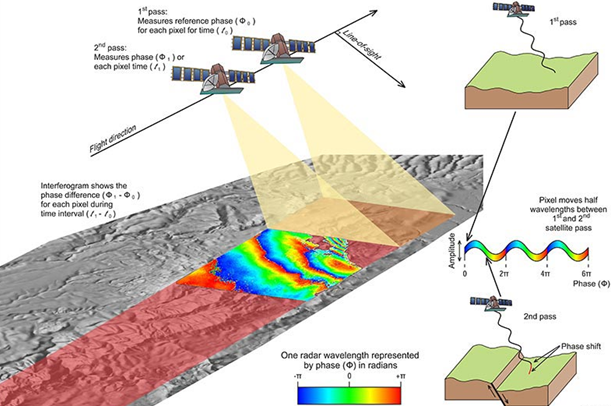 Besides monitoring land subsidence, InSAR data from ADWR has the following applications:

ADWR currently collects InSAR data over more than 50,000 square miles across Arizona and InSAR data are collected throughout the year to monitor seasonal deformation. ADWR’s extensive library of over 1,500 SAR scenes - used to process InSAR data - covers an area greater than 150,000 square miles at a cost of more than $1.5 million, predominantly purchased through grants and cooperators. ADWR’s statewide InSAR data set for active land subsidence areas spans time periods from 1992 to 2000, 2004 to 2010, 2006 to 2011, and 2010 to the present depending on the satellite used. ADWR now identifies more than 26 individual land subsidence features in Arizona, collectively covering more than 3,400 square miles.