As at most great American points of interest that involve lots of walking, the managers of the Palo Verde Nuclear Generating Station west of Phoenix near Tonopah recommend that invited guests wear comfortable clothing and sturdy shoes.

Of course, they also try to discourage wearing synthetic fabrics if your tour includes visiting radiologically controlled areas, as “they may attract radon gas.”

Operated by Arizona Public Service on behalf of a consortium of power providers (at 29.1 percent, APS owns the largest share of the facility, which has six other owners, the next largest of which, at 17.5 percent, is Salt River Project), Palo Verde since 1992 has been the nation’s largest power-production facility.

Tom Buschatzke, director of the Arizona Department of Water Resources, recently toured the enormous nuclear facility along with Hunter Moore, adviser to Gov. Ducey on natural resources issues, and Assistant ADWR Director Clint Chandler. They toured at the invitation of the facility’s management. 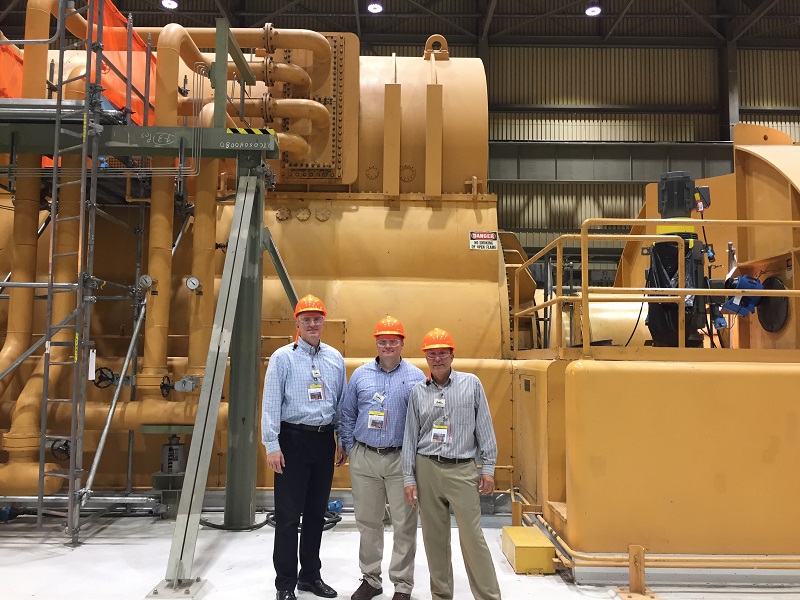 Moore said he was especially impressed with the plant components that handle the delivery, use and re-use of water.

“Palo Verde’s value to the State of Arizona and to the southwestern U.S. is remarkable,” said Moore.

“It provides, safe, reliable power, economically and with a singular attention to the responsible use, and re-use, of one of our most precious resources in the state – water. "

The visit included a tour of the containment building itself. It occurred at the only time tours of this area are possible, which is during the refueling process. During refueling, approximately one third of the fuel rods are extracted and replaced with new fuel in order to operate for another 18-month cycle.

In myriad respects, Palo Verde is “the biggest” of its nuclear genre, they found.

With three pressurized water reactors, each with a capacity to produce up to 1.4 gigawatts of electrical power, Palo Verde is the nation’s largest nuclear facility in terms of power generation. It produces more than a third of all electricity generated in Arizona.

Palo Verde, in fact, is the only power-generating facility in the U.S. ever to produce more than 30 million megawatt-hours of electric power, and it has done that eight times.

With 2,500 employees at the facility 50 miles west of metro Phoenix, Palo Verde is estimated to have a $1.8 billion impact on Arizona’s economy. 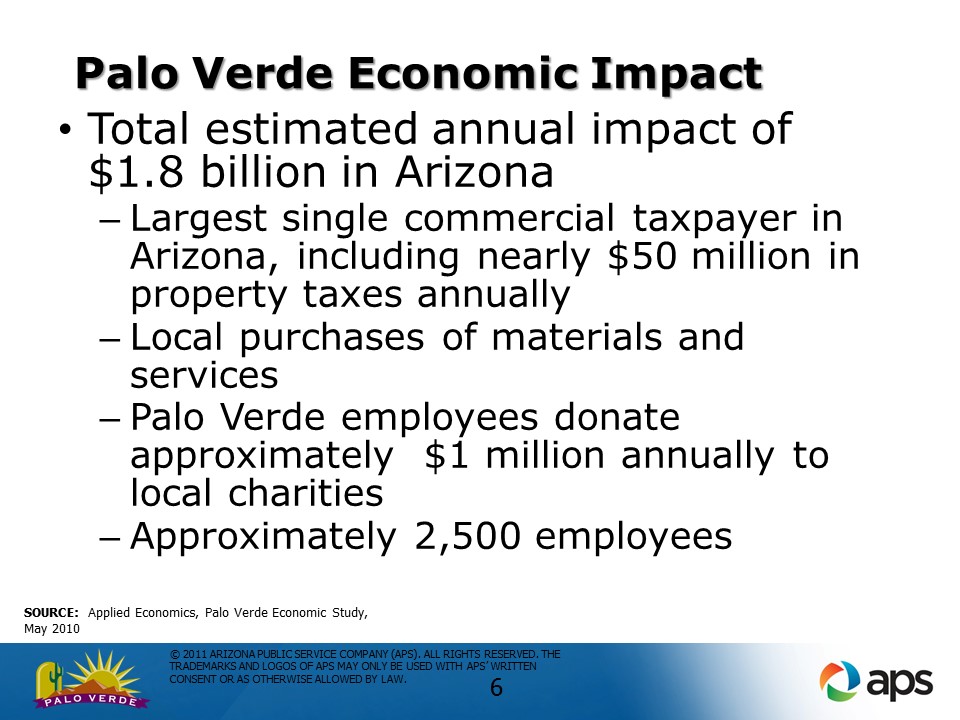 Notably, it produced that power almost entirely without carbon-dioxide emissions. APS estimates that power generation at Palo Verde has offset the production of over a half billion metric tons of carbon dioxide, over 700,000 tons of nitrogen dioxide and a quarter million tons of sulfur dioxide.

Palo Verde’s most unique environmental advantage, however, is in its cooling system.

The only nuclear power generation facility in the world that is not located on a major body of water, Palo Verde gets its cooling water from an innovative system of treated wastewater provided by the nearby cities of metropolitan Phoenix.

That part of the operation impressed Assistant Water Resources Director Clint Chandler the most, he said.

“In my view, Palo Verde is indicative of Arizona’s resourcefulness and leadership in water planning,” said Chandler.

In 2010, the plant signed a 40-year agreement with five Valley cities to buy up to 26 billion gallons of treated effluent each year for cooling the three massive power-generation units.

But when the arrangements for the “wastewater” originally were negotiated in the 1970s, municipal “wastewater” truly was viewed as waste product. The concept of “environmentalism” as it is known today was in its infancy.

“Someone at APS had the good entrepreneurial sense to turn that so-called ‘waste’ into a real resource,” said Water Resources Director Tom Buschatzke. 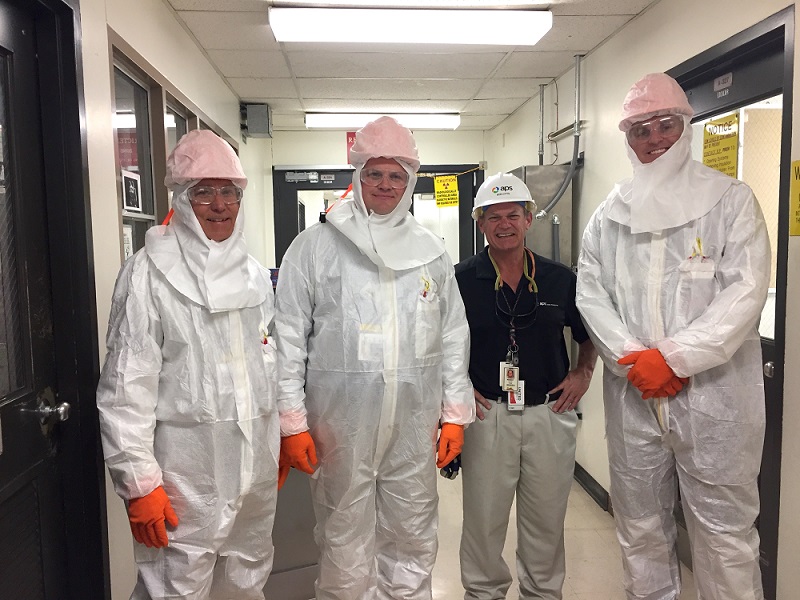 Those are environmental savings, of course. In terms of dollar savings, APS also estimates that the replacement cost of the next-least expensive form of fuel for power plants – natural gas – could cost APS customers $36 billion over the plant’s 20-year license renewal period.

“The security there was just amazing,” said Buschatzke. “No unauthorized photos, and security watching every step of the way.”

A tour of Palo Verde requires passing through a literal maze of redundant security systems, including a background check that includes required information regarding a visitor’s health condition.

The facility proudly identifies itself as having earned “STAR” status with the Arizona Department of Safety and Health’s Voluntary Protection Program – a top safety status whose criteria only about three dozen companies in the state have met.

It is in the design of the 4,050-acre facility itself, especially within the three enormous containment domes, that the concept of “security” becomes genuinely inspiring.  The pre-stressed, post-tensioned domes average 4.5 feet thick, including a quarter-inch steel liner that provides it with the equivalent of a 35-foot thick non-reinforced concrete structure. The base of the concrete containment floor is ten feet thick.

Indeed, the Water Resources officials found that the security and safety systems they examined are elements of an expressed nuclear-safety culture. There literally is a book on the subject – Traits of a Healthy Nuclear Safety Culture – that defines safety-thinking as “pattern of thinking, feeling and behaving such that safety is emphasized over competing priorities.” 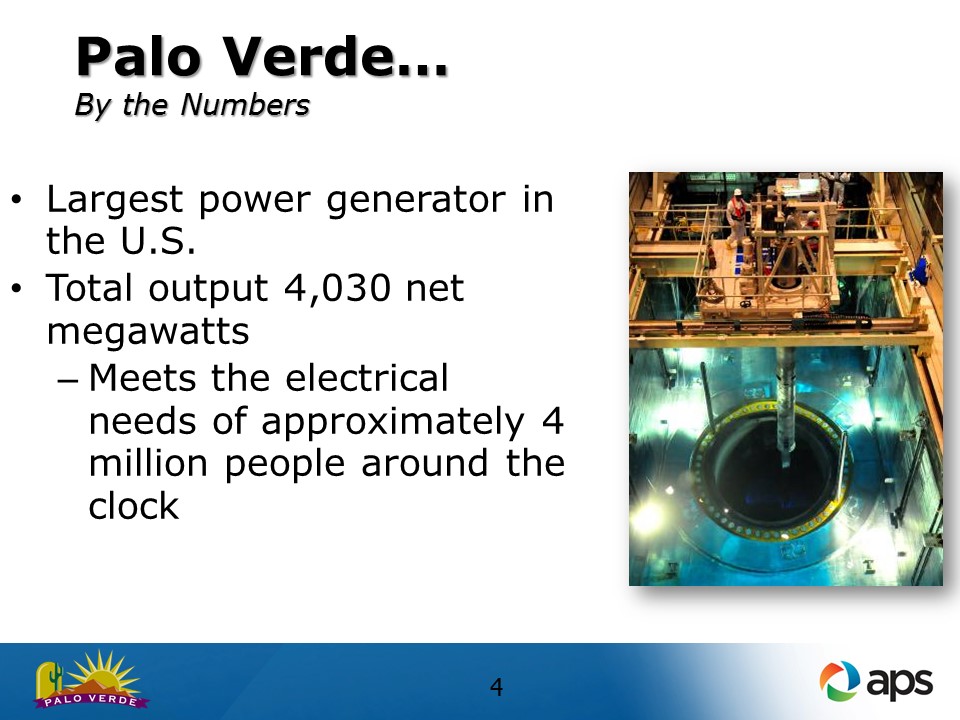