Part Two of the federal government’s annual August analysis of conditions on the Colorado River system are out, and – just like Part One –  the results depict a mixed bag of decreasing risk in the short-term and rapidly increasing risk in the longer-term.

River-system modeling by the federal Bureau of Reclamation is showing a much lower chance of a Lower Basin water shortage in 2019, a result of the extremely wet, snowy early winter that created higher than average snowpack on the western slopes of the Rocky Mountains.

The modeling depicts a 15 percent chance of a shortfall in Colorado River allocations beginning in January 2019, a 16 percent drop in shortfall expectations in April of this year, and a substantial drop from expectations of a year ago, when the chances of Lake Mead falling into shortfall as soon as January 1, 2018, stood at even odds.

Lake Mead falls into “shortfall” once lake levels recede to under 1,075 feet. By the terms of a 2007 agreement among the states, Arizona and Nevada would begin taking substantial cutbacks in their delivery allocations from Lake Mead at that point. 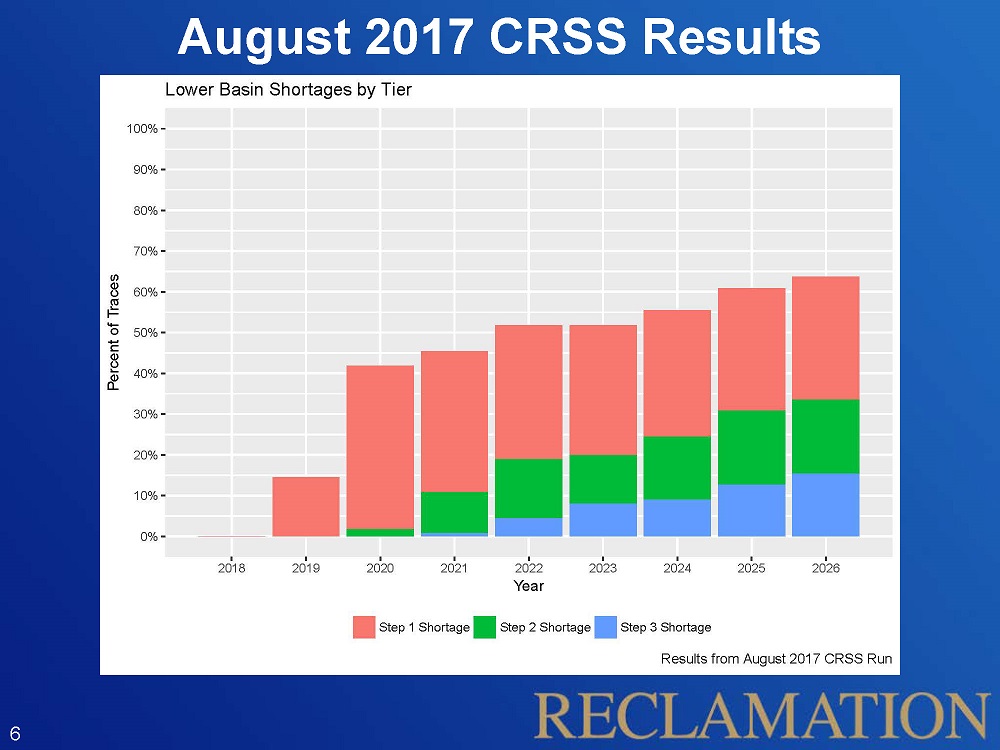 Unfortunately, the modeling – known as the Colorado River Simulation System, or CRSS – also depicts increased risk of shortfall starting in 2020.

Chances for a Lower Basin shortage increase to 42 percent in 2020, according to the modeling, and continue rising to a better-than-even chance of a shortage in 2022.

The Bureau’s River Operations Group, which conducts the modeling survey, cites a lower starting elevation at Lake Powell as the principle culprit for the quick-rising shortfall likelihood in Lake Mead.

Lake Powell serves as a regulator of water flowing downstream from the Upper Basin states of Colorado, Utah, Wyoming and New Mexico to Lake Mead.

As recently as March, analysts had been hopeful that the initially strong Upper Basin winter snowpack might produce a huge “equalization” release this year from Powell to Mead – perhaps as much as two million acre-feet above the 8.3 million acre-foot annual average.

An abnormally dry and warm late Spring, however, provided less runoff into Lake Powell. That resulted in the lower-than-anticipated Spring elevations in Powell, which nixed the hoped-for “equalization” into Mead.

Indeed, the Lower Basin water picture quickly darkens, according to the analysis.

Between 2020 and 2022, the probabilities of a shortage at Lake Mead increase by at least 10 percent a year over predictions laid out in the Bureau’s April analysis.

The Bureau’s April and August data analyses are key to making plans for water releases for the coming year.

In particular, the August 24-Month Study projections for anticipated elevations at the beginning of the next calendar year are used by the Secretary of the Interior to set the operating tiers for Lake Powell and Lake Mead.

The first part of the Bureau’s August data analysis – its determination of anticipated water-level flows in the Colorado River system – concluded that Lake Mead would end the 2017 calendar year at an elevation of 1,083.46 feet.

That determination put Mead more than eight feet above the point that Arizona and Nevada would be required to take delivery shortfalls, according to the terms of the 2007 agreement.

As Arizona Department of Water Resources Director Tom Buschatzke noted regarding the data released last week, much of the positive news coming out now about Lake Mead can be attributed to conservation efforts.

“The collective efforts of Arizona, California, Nevada and Mexico to conserve water in Lake Mead from 2014 through 2017 have created an additional 14 feet of elevation in the lake,” said Buschatzke.