The five participants in a historic effort to help stabilize Lake Mead water levels made their agreement formal at a signing ceremony on July 14 hosted by the Arizona Department of Water Resources.

The formal consummation of the five-party agreement opened the door for the Gila River Indian Community to conserve a portion of its Colorado River entitlement for the benefit of Lake Mead.

As part of the $6 million partnership agreement with the Bureau of Reclamation, the State of Arizona, the City of Phoenix and the Walton Family Foundation, Inc., The Gila River Community will forego delivery of 40,000 acre-feet of its 2017 Colorado River allocation.

The tribe will leave that water in Lake Mead. It will be saved in the Colorado River system rather than be tied to any defined use.

“Today's agreement and the Community's ongoing effort to protect the Colorado River carry immense importance for our people and our neighbors across the Southwest,” said Gila River Indian Community Governor Stephen Roe Lewis.

“The first positive is that this agreement allows the Community to generate income today from water we otherwise would have stored off-reservation to create long-term credits for future marketing. This revenue will help our economy right now, in the present, without sacrificing our future or our water,” added Gov. Lewis. 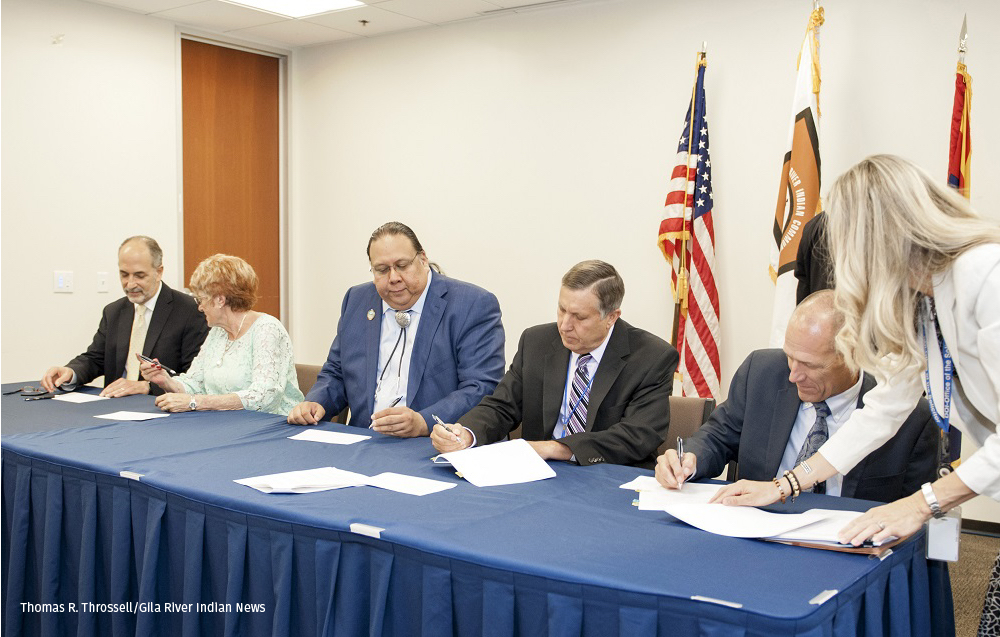 “Second, this agreement helps conserve water in Lake Mead. That conservation effort benefits our people and every resident of Arizona by helping to protect the Colorado River and our water future.”

Added Governor Lewis: “Given the central role of water in our economy and our culture, today's agreement is truly a cause for celebration.”

The five partners effectively view the agreement as a “down payment” on an Arizona-based plan for protecting the great Colorado River-system reservoir, where water levels have been dropping rapidly in recent years as a result of long-running drought and over-allocation.

The Arizona plan – known as the “Drought Contingency Plan Plus” – represents an effort on the part of leaders in the Arizona water community to keep Lake Mead above the first shortage trigger for as long as possible.

“This partnership lays the groundwork for a compensated system-conservation program in the state of Arizona for the benefit of all Colorado River water users,” said Arizona Department of Water Resources Director Tom Buschatzke.

The State of Arizona contributed $2 million to the conservation effort – part of a three-year financial commitment totaling $6 million approved this year by the Legislature and signed by Gov. Doug Ducey.

The City of Phoenix, whose mayor and council approved this agreement on June 13, provided $2 million.

“Smart water policy is essential to our economy and to every Arizonan,” Phoenix Mayor Greg Stanton said.

Added Mayor Stanton: "This historic agreement shows how by thinking creatively and working together we can protect our future Colorado River water supply and safeguard against the continued drought and climate change that are directly impacting Lake Mead.”

“Today’s agreement is about coming together to forge solutions for a sustainable Colorado River that benefit people and the environment,” said Barry Gold, director of the environment program at the Walton Family Foundation.

The federal Bureau of Reclamation also contributed $1 million to this Lake Mead stabilization effort. On January 17 of this year, Reclamation provided $6 million to the Gila River Community for system conservation that resulted in the Community’s first 40,000 acre-feet stored in Lake Mead.

“We are pleased to continue to help our partners in Arizona in their efforts to conserve water in Lake Mead and to implement a Lower Basin Drought Contingency Plan with California and Nevada,” said Terry Fulp, Lower Colorado Regional Director.