All in on protecting Lake Mead

All in on protecting Lake Mead

“We are the people of the river.”

With a sweep of his hand toward vast, new wetlands blossoming at the southernmost corner of the Gila River Indian Community, Tribal Governor Stephen Lewis explained the dual purpose behind the tribe’s investment in the fast-rushing waters flowing near the site known as the Olberg Bridge.

Reason One, he said, was the agreement between the city of Phoenix and the Gila River tribe to store city water at the site, officially designated the Olberg Underground Storage Facility. The project, which already is blossoming into an extended, marsh-like ecosystem, stored 3,758 acre-feet last year. The goal this year is to bank 10,000 acre-feet of water underground. 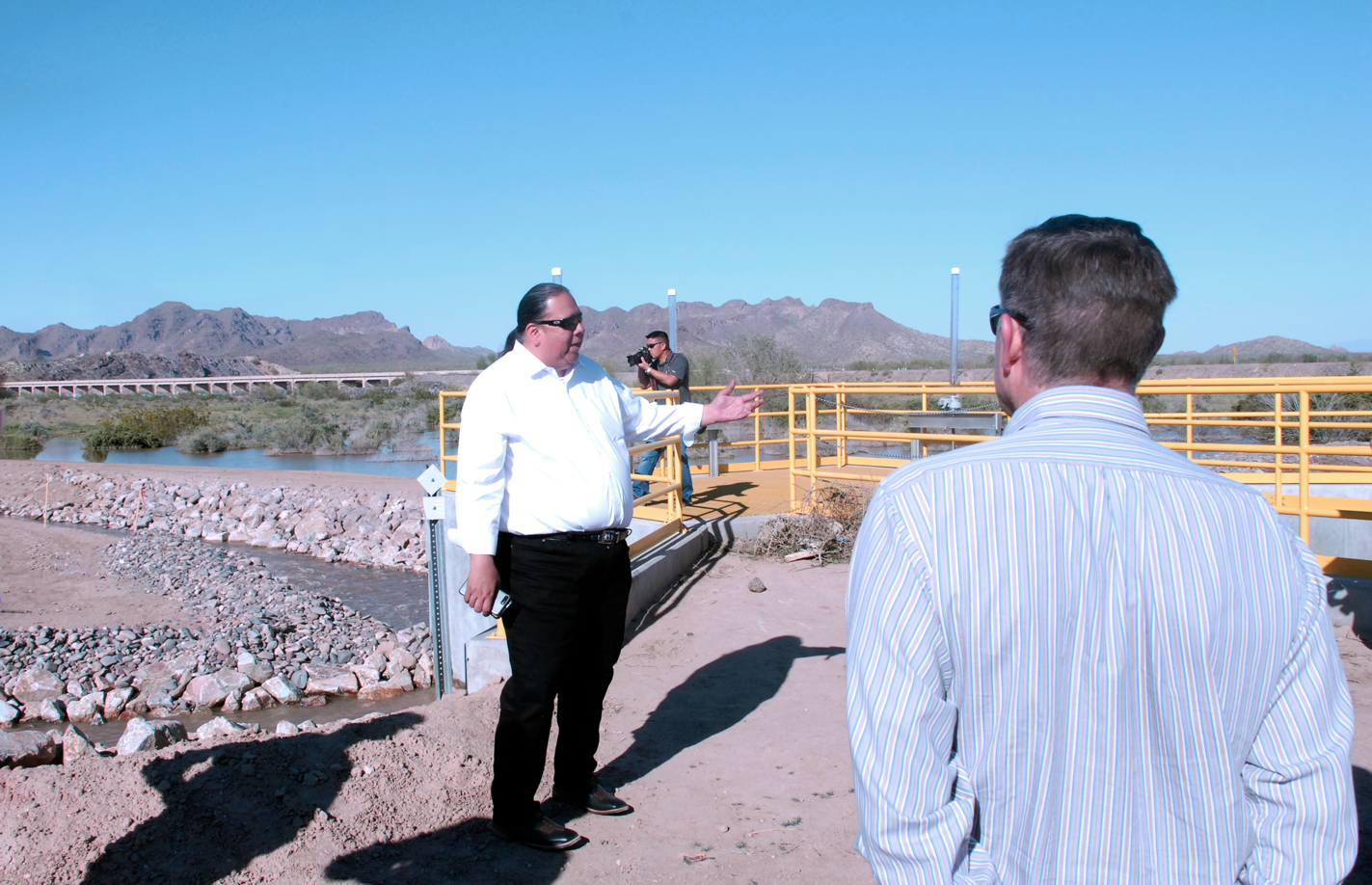 Arizona Department of Water Resources is working with the tribe to permit it as an underground water-storage facility.

Reason Two is more heartfelt to the Gila River community. It is to “redevelop and reinvigorate” an important part of tribal culture that literally evaporated many years ago when the Gila began drying up.

The near-term plan, said Gov. Lewis, is to use the new wetlands to resurrect “tribal folkways” that were lost long ago. And the longer-term plan? To some day make portions of the Gila River flow again, he said.

“When you close your eyes, you can hear the river.”

Over the course of a two-day event this week, the Gila River community, led by Gov. Lewis and his staff, hosted a diverse group of federal, state and municipal water officials, including Arizona Department of Water Resources Director Tom Buschatzke, as well as representatives of the philanthropic Walton Family Foundation. 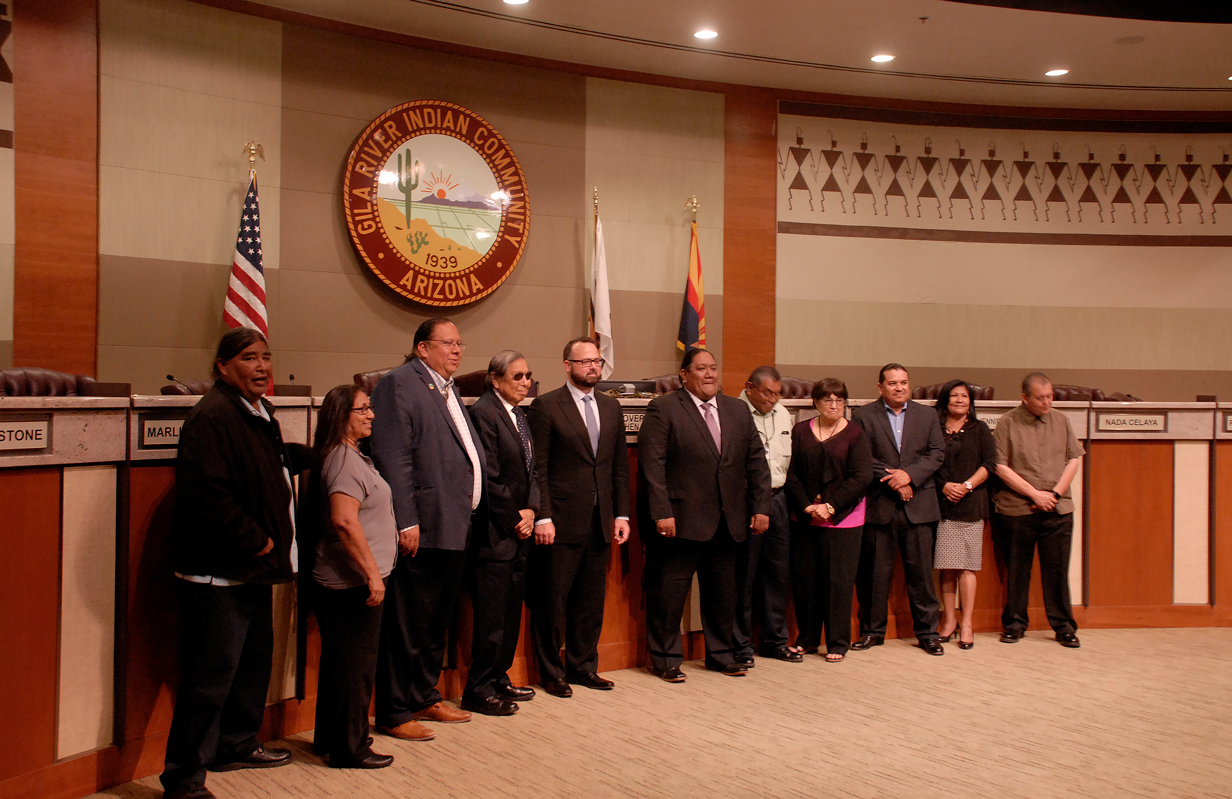 The event included tours of the Olberg site, as well as tours of other Gila River water projects, including plans to more than double the capacity of a pumping facilities that pump water for use on the tribe’s agricultural lands.

The event culminated Wednesday in the signing of a cooperative water-conservation partnership – a non-binding agreement among the parties to work together on the most critical water-related issues facing Arizona and the entire Southwest. Those cooperative efforts will include taking action to stabilize Lake Mead, the Colorado River system’s troubled reservoir.

With the largest allocation of Colorado River water flowing from Mead through the Central Arizona Project canal system, the Gila River tribe hopes to help bolster water levels at Lake Mead by storing a portion of its allocation there.

“We consider this (March 15) agreement a continuation of our commitments made to the United States in January that will allow Arizona parties to continue their negotiations and efforts to conclude a comprehensive plan, commonly called the ‘Drought Contingency Plan Plus,’ or ‘DCP Plus,’ to address the severe drought on the Colorado River,” said Gov. Lewis.

The agreement builds on a Jan. 18 agreement on principles between the Gila River community and the federal government. 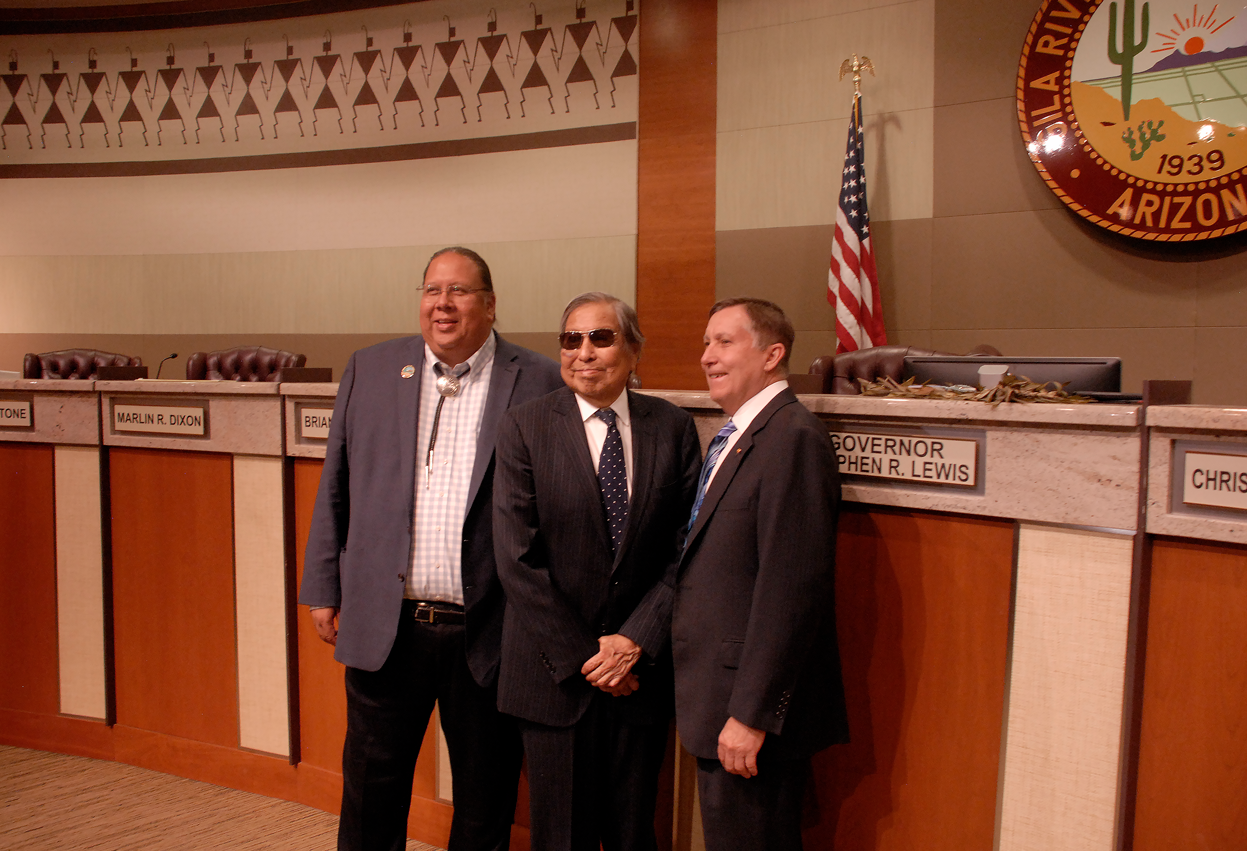 “This agreement will allow for the creation of tools that will be effective in protecting Lake Mead,” said Buschatzke.

“Those tools will be enduring and inclusive, allowing for participation by a broad group of Arizona water entitlement holders and other constituencies.”

The CAWCD is the governing body that oversees the operation of the Central Arizona Project, the 336-mile system of canals that brings approximately 1.5 million acre-feet of Colorado River water annually to central and southern Arizona.

Lewis, a Gila River tribal member and father of the community’s governor, has a long history working on behalf of water issues. He was one of the principle architects of the Arizona Water Settlements Act of 2004.