Weather-wise, it is one of the most anticipated events of the fall season.

Will the Governor’s Drought Interagency Coordinating Group recommend to Governor Ducey that he add the approaching “water year” to the State’s lengthy string of official drought years?

Or will the panel recommend that the official dry spell designation end in Arizona, thus following in the footsteps of California, where that state’s drought designation was lifted in the wake of its extraordinarily wet winter?

Considering that much of Arizona remains in the same long-term state of drought it has experienced since the mid-1990s, the ICG’s recommendation for maintaining the declaration was not the toughest of calls, as it turned out.

On the basis of reports from weather forecasters and environment analysts, the Governor’s Drought Interagency Coordinating Group on Thursday officially extended the region’s lengthy period of drought. Arizona governors have declared an official state of drought every year since 1999.

Traditionally, the ICG makes two recommendations to the Governor on the State’s drought status – one in the spring and another in the fall, shortly after the end of the water year, which runs from October 1 to September 30 of the following year.

An important part of the panel’s analysis is the Arizona Drought Preparedness Annual Report, which Arizona Department of Water Resources staff prepare each year based on updates from a group of weather-data monitoring organizations, including the Drought Monitoring Technical Committee, the Interagency Coordinating Group, local drought-impact groups and others.

What the report concluded from all that collected data was (ahem) pretty dry stuff.

The report found that while last winter proved much wetter than average on the upper Colorado River basin and some other areas, the rest of Arizona experienced a winter that was “quite dry,” at 80 percent of average precipitation.

According to the report, “the overall winter was much wetter than average across the western two-thirds of Arizona,” which helped with inflows to Lake Powell and Lake Mead, the region’s two great Colorado River reservoirs.

But snow accumulation – or, specifically, lack of same – proved the winter’s downfall.

According to the report, snow accumulation “was about normal across the state.”

Despite a nice uptick in accumulations in January and February, the “statewide snowpack ended up at about the 30-year median.”

The report also observed that the summer monsoon season proved to be a really wet one in some regions. But overall it was at best average. 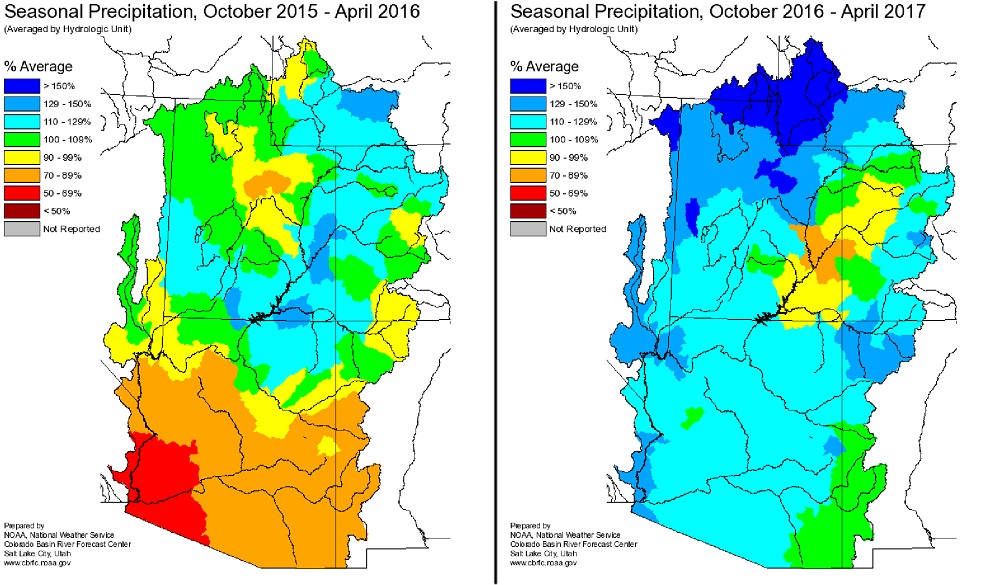 At Thursday’s public hearing held at the offices of Water Resources, the audience heard a report on the 2017 drought status from State Climatologist Nancy Selover and a report on expectations for the coming winter season from Mark O’Malley of the National Weather Service.

Selover acknowledged that moisture conditions in the State are “better now,” but said that “we still are not making up for the previous dry years.”

Assessing expectations for the coming winter, O’Malley observed that the Southwest will be experiencing a “weak ‘La Niña’ phase.”

“It’s not enormous, but we’re already seeing some influence (of the La Niña system),” O’Malley said.

“The pattern has not been favorable to bring storm systems into Arizona.”

In addition, they heard an update on conditions on the Colorado River system from Jeff Inwood of Water Resources; a report on the Salt River and Verde River watershed supplies from Charlie Ester of Salt River Project; a report from Bill Boyd of the Arizona Department of Forestry & Fire Management on wildfires and forest health; and, a report on the impact of drought on the State’s wildlife from Ed Jahrke and Dave Weedman of the Arizona Department of Game & Fish.

“The governor and the department have reached out to water users from around the State,” said Buschatzke, who added that many of the issues that are being raised in the Governor’s “Conversation” are issues that relate directly to the ICG’s drought analysis.