The sensational news about record-setting snowpack in the Sierra Nevada of California and “atmospheric rivers” delivering over 1,000 percent of normal winter rainfall to Big Sur has disguised a much less-than-sensational record of winter moisture elsewhere in the West.

The winter snowpack on the western slopes of the Rockies – the source moisture for the Colorado River – is producing much less runoff than had been anticipated.

As a result, the federal Bureau of Reclamation now is predicting that Colorado River releases from Lake Powell into Lake Mead will be far lower than what the Bureau had anticipated in March of this year.

Indeed, the Bureau now is predicting a huge drop in Lake Mead inflows from those predicted just a month ago.

According to BOR’s June 24-Month Study , projected flows into Lake Mead most likely will result in water levels 20 feet lower on January 1, 2019 than the Bureau had estimated in its 24-Month Study released in May. 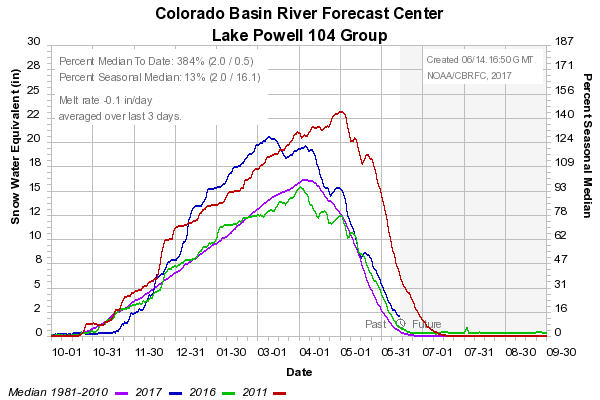 The May 24-Month Study prepared by BOR (based on the Colorado River Basin Forecast Center’s water supply forecast) concluded that on January 1, 2019, Lake Mead’s depth likely would be 1,096.77 feet.

Just one month later, the Bureau now is projecting Lake Mead’s surface level on that date at 1,076.53 feet, literally inches above the level that would trigger automatic delivery cutbacks, mostly to central Arizona’s allotment of Colorado River water.

The dramatic turn-around in anticipated water flow into Lake Mead is a direct result of disappointing expectations for water flow into Lake Powell upstream. Powell’s diminished inflows are due to a dry early spring and consistently warmer-than-average temperatures in the Rocky Mountain region through the spring.

The sudden drop-off of moisture in the wake of an extremely wet January and February was “the big game-changer,” said Jeff Inwood of the Arizona Department of Water Resources’ Colorado River Team.

“The spring snows stopped and it got warmer faster, so lots of the snowpack melted off.”

The severe drop-off in anticipated flows into Lake Mead represents a shocking turn-around in expectations for the near-term health of the great reservoir.

Scarcely more than a month ago, most water analysts were breathing a sigh of relief in the wake of years of drought and diminished Rocky Mountain snowpack.

Improved moisture levels this past winter, they believed, had pushed back a Day of Reckoning for Lake Mead. Better-than-average winter snows would prompt water releases from Lake Powell that would raise Mead levels above critical stages.

The anticipation of relief was so palpable, in fact, that some Arizona water users and managers began to believe that the state would have more time to deal with the “Drought Contingency Plan – Plus,” the intra-Arizona plan that, once approved, would spread water-delivery cuts among a wider swath of Arizona water users.

In fact, as recently as March, some analysts were talking openly of a possible “equalization” release this year from Lake Powell to Lake Mead – a comparatively enormous release of water, perhaps of more than 11 million acre-feet. John Fleck, the Water Resources Program director at the University of New Mexico, calculated in mid-March that if the heavy winter moisture held, Lake Mead “would rise 27 feet this year.”

Fleck added that “it probably won’t” hold. And he was right. The June 2017 24-Month Study results have made that prediction official: the big 2017 water balloon now appears to have burst.

Modeling conducted by the Bureau in addition to the 24-Month Study in April indicated that there remained a 45% probability of Lake Powell operating in the Equalization Tier with a release from Lake Powell of greater than 8.23 MAF in 2018.

In March, water analysts were predicting a very healthy 10.4 million acre-feet inflow into Lake Powell off the Rocky Mountain watershed during the critical April-July runoff season.

Now? Updated June statistics indicate inflows to Lake Powell of just 8.3 million acre-feet, a drop-off of over 2 million acre-feet -- more than the entire annual delivery of the Central Arizona Project’s allotment for its Maricopa, Pinal and Pima County customers.

“We’ve seen this before,” said Water Resources Director Tom Buschatzke, noting that some of the region’s driest winter seasons started out with hope-inspiring bursts of moisture. “We saw it as recently as 2012 and 2013.”

“Recent scientific studies have been predicting this would be more of what we could expect to see in the future,” Buschatzke said.

The diminished expectations of water flowing into Lake Powell directly impact expectations for the health of Lake Mead in the coming years.

The Bureau of Reclamation’s data analysis indicate that on January 1, 2018 – the period during which heavy Lake Powell releases were expected to give Colorado River water officials a “breather” – Lake Mead’s water level likely will be at just 1,080.49 feet, barely more than five feet above the shortage trigger of 1,075 feet.