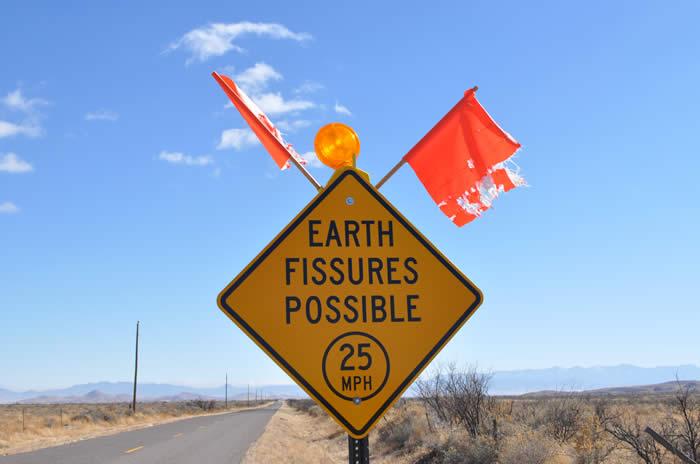 The problem of land subsidence in Arizona – the lowering in elevation of land-surface levels, largely the result of groundwater extraction – is a decidedly mixed bag, the Arizona Department of Water Resources is discovering.

Thanks to decreased groundwater pumping in the Phoenix and Tucson Active Management Areas, for example, subsidence rates in many areas of those AMAs have decreased between 25 and 90 percent compared to rates in the 1990s.

That is just one of the major findings of the department’s recent “Land Subsidence Monitoring Report No. 3,” released earlier this month.

And it’s the news from the happy side of the bag.

On the opposite side, land subsidence statewide is proving to be an increasingly serious challenge that is causing problems for infrastructure in some areas. And it is proving to be a headache even in certain parts of active-management areas.

As the report describes, Water Resources first began monitoring for subsidence in the eastern areas of the Valley and around Luke Air Force Base in the west after numerous “non-exempt” wells – that is, wells that draw up groundwater at rates faster than 35 gallons per minute – were installed starting in 1997.

Historically, land levels in those areas have dropped at significant rates, the recent report finds.

The problems caused by land subsidence do not go away simply by fixing cracked foundations, reconnecting broken pipelines or repairing roadways.

“Land subsidence is a regional problem for some groundwater basins in the state and may continue to be an ongoing problem,” said Brian Conway, who prepared the report on behalf of Water Resources.

“Even if sustainable, safe-yield groundwater withdrawal occurred, residual land subsidence would continue until the groundwater levels recover -- and/or the open pore-spaces in the sub-surface fully collapse.”

As one would expect, the Water Resources report finds that subsidence is most active in regions outside the active-management areas – that is, in areas where groundwater pumping is unregulated.

The Geological Survey and Water Resources analysts have found that the Willcox Groundwater Basin in southeastern Arizona is the most active area for forming new earth fissures.

Southeastern Arizona is one of the regions most severely impacted by drought. The area also has seen substantial increases in farming operations that rely on mined groundwater.

The Willcox Basin is outside the reach of the state’s Groundwater Management Act of 1980, which regulates groundwater extraction in active-management areas. According to the report, new earth fissures in the area are impacting roads, highways, power lines and a pipeline.

The report observes that other non-AMA regions of the state also have seen considerable increases in their rates of earth subsidence, notably parts of the McMullen Valley Basin and the San Simon Valley Sub-basin. Both of those regions have seen increased agriculture activity in recent years that is reliant on mined groundwater 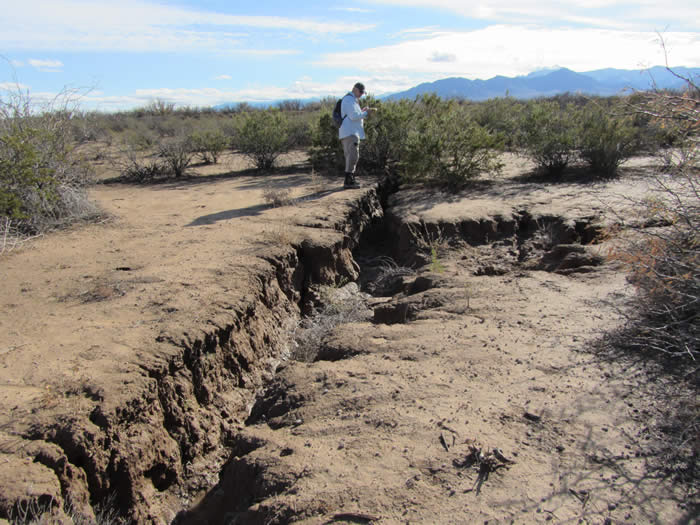 The introduction of the InSAR technology has proved to be a game-changer in terms of the state’s ability to accurately track the development of subsidence over time.

Water Resources was awarded a $1.3 million grant from NASA in 2002 that kicked off a three-year effort to integrate the InSAR system into Arizona’s subsidence-monitoring programs.

The program now has 14 different partners in the effort whose financial support allows the department to fund the InSAR data collection.

With the InSAR data, Water Resources has identified more than 26 individual land subsidence features around the state, collectively covering more than 3,400 square miles.

“The InSAR data is a huge part of our monitoring efforts now,” said Conway.

“We are able to cover large areas with the data and are able to see millimeter changes of deformation at a very high resolution.”