“If there’s one thing Arizona is the best in the nation at – it’s water.” – Governor Doug Ducey in his State of the State Address, January 11, 2016

An official with the Arizona Department of Water Resources told attendees at an “environmental and sustainability summit” in Prescott on Thursday that talks organized this summer by Governor Doug Ducey to update and refine Arizona water laws are moving reform proposals forward. 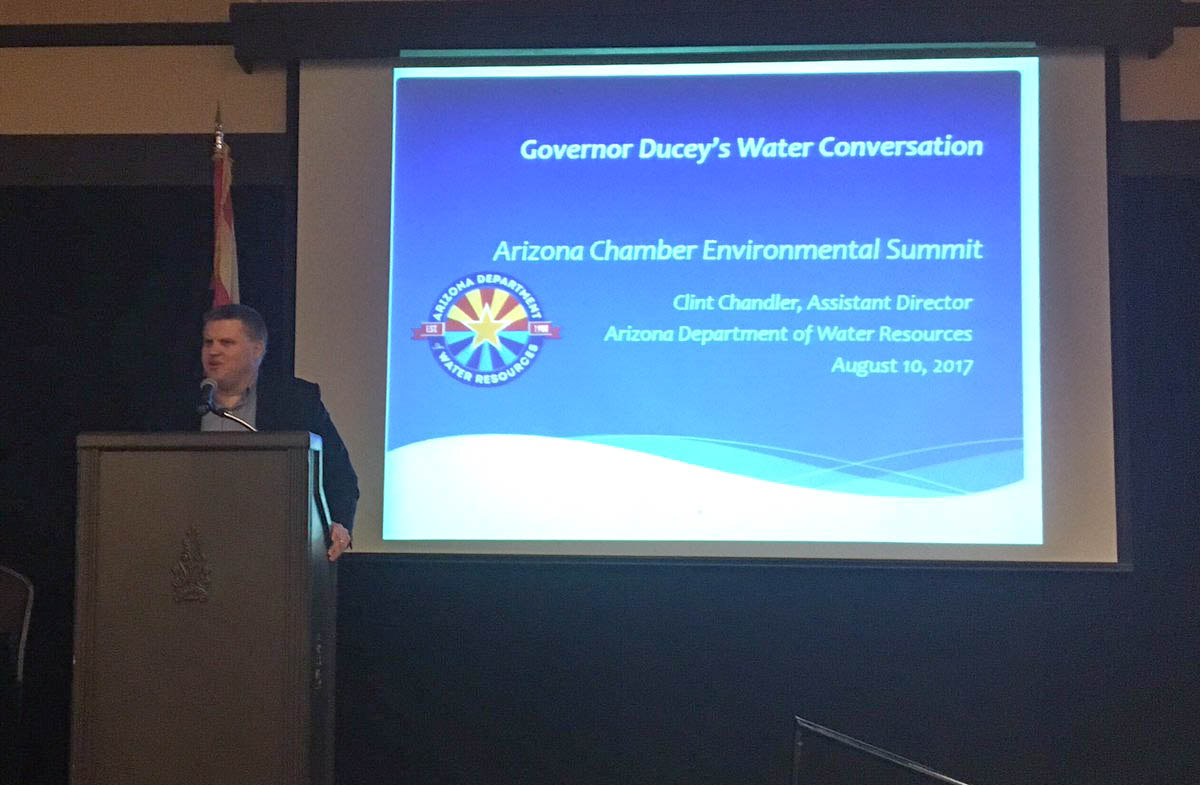 The Governor’s reform-minded “water conversations,” said ADWR Assistant Director Clint Chandler, express a commitment to improving a body of State water law that already is viewed as the nation’s most effective.

The water conversations combine the perspectives provided by a broad representation from various water users and much of the business community, he said. 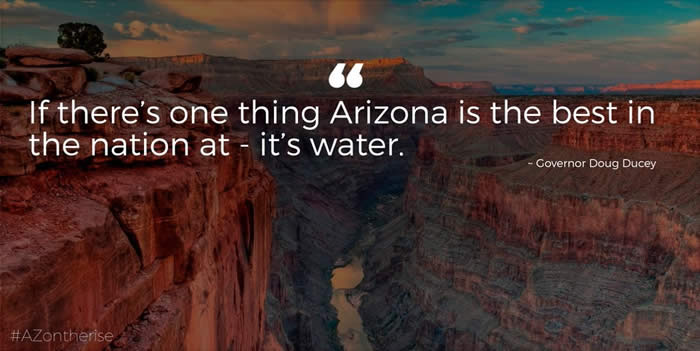 Chandler was invited to speak on Arizona water issues at the 2017 Environmental and Sustainability Summit sponsored by the Arizona Manufacturers Council. He told attendees at the annual gathering that Arizona must speak “with one voice” on matters pertaining to the Colorado River.

In particular, he said, a big part of the reform effort must focus on the Central Arizona Water Conservation District (CAWCD), which operates the 336-mile Central Arizona Project canal system. The CAP system delivers roughly half of Arizona’s Colorado River allocation to water users in Maricopa, Pinal and Pima counties.

A series of rogue actions by CAWCD -- including negotiating a 2015 “water storage” plan that would have effectively amounted to a sale of up to 60,000 acre-feet of Arizona’s Colorado River allocation to drought-stricken California -- demonstrated the need for reform, said Chandler.

In spring 2015, the CAWCD negotiated a plan with southern California water authorities calling for the Californians to pay more than $17 million for a portion of Arizona’s Colorado River allocation.

CAWCD had otherwise set aside the water to provide a buffer for Lake Mead, where water levels in recent years have dropped dangerously fast and low.

“I AM NOT AT ALL SURE THAT ONE EVER AVOIDS THE OBVIOUS REALITY THAT ARIZONA IS, TO A GREATER OR LESSER DEGREE, SELLING WATER TO CALIFORNIA”

According to the terms of the deal, the diversion to California was to be characterized as a “water storage” arrangement.

The arrangement ultimately was abandoned after the State of Arizona interceded, arguing that the deal violated Arizona law prohibiting the direct or indirect transfer of the State’s Colorado River water, and that, in addition to being beyond CAWCD’s authority, constituted bad policy for the State.

As Chandler noted on Thursday, CAWCD’s own attorney acknowledged in a May 12, 2015 memo to his client that the plan constituted a de facto sale of Arizona’s Colorado River water to California:

“I am not at all sure that one ever avoids the obvious reality that Arizona is, to a greater or lesser degree, selling water to California,” the attorney wrote.

Chandler also observed that Arizona’s groundwater laws need updating. Changes in land use, especially in remote rural regions, have spurred the need for more and better data on groundwater use throughout Arizona, he said.

“We are looking at expanding metering and reporting groundwater use statewide,” said Chandler, who also spoke about the need for reform of the State’s groundwater laws.

The only way to understand clearly how much groundwater is being extracted statewide is by measuring it – something that is not occurring now, he said.

The Governor’s reform talks began in earnest in late June and are expected to continue well into the Fall.

Taking action now – as opposed to waiting for a crisis to occur -- is crucial, Chandler said.

“Arizona is currently well-situated on water. We are benefiting from a long, rich, legacy of water management leadership spanning many decades. But the numerous and effective choices from the past are also cautionary.

“They demonstrate that decisive actions, concerning issues that require attention, are necessary to preserve our quality of life and economic development potential. We now have matters that require our attention.”

In addition to metering and reporting groundwater use, Governor Ducey and his team are seeking support from a broad cross-section of Arizona water users and water providers, including environmental groups, for a variety of updates to the State’s famous 1980 Groundwater Act, said Chandler.

The 1980 Act created the “Active Management Areas” in which groundwater use largely has stabilized.

Those “AMAs” include Arizona’s most heavily populated urban areas, but do not include many rural areas that in recent years have experienced a dramatic boom in agricultural uses, most of which are reliant on unmetered and unregulated groundwater mining.

Governor Ducey also is seeking to extend the life of management plans created for active-management areas, which are set to expire in 2025.