The news is abundant in the West about all the moisture abundance occurring nearly – accent, nearly – everywhere.

Western saturation is the biggest story of the winter in the U.S.

In some areas of northern California, rain totals reached 400 percent of normal in December.  January snowpack in the Sierra Nevada mountains stood at 173 percent of normal, the equivalent of 5.7 trillion gallons of water. 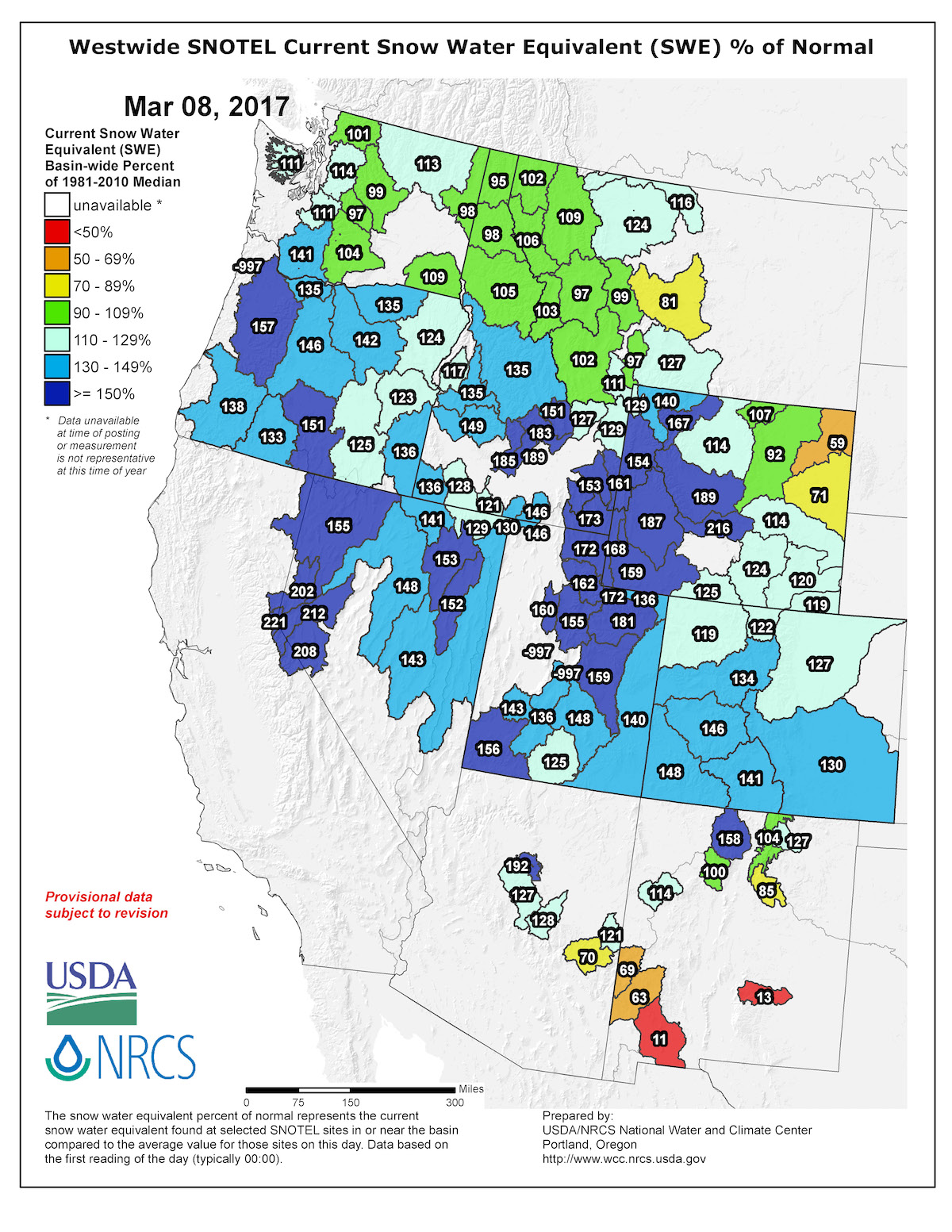 It wasn’t just California experiencing all those remarkably wet atmospheric rivers. As early as mid-January, the Colorado River snowpack stood at 57 percent above the long-term median for that time of year and that was before the big storms of early and late February swept through the Rockies.

The U.S. Department of Agriculture’s latest “Westwide SNOTEL Current Snow Water Equivalent Percentage of Normal” maps of the western mountains are more purple than a ripe eggplant, indicating vast swatches of the region with snowpack deeper than 150 percent of average.

All of which sounds splendid, seemingly alive with drought-busting possibilities… until you have a look at the sobering reality on display in the U.S. Drought Monitor short-term report for February in Arizona.

The February Drought Monitor report may provide the best evidence of the 2016-2017 winter in the Western U.S. for three consistent climate truisms:

The February report concluded: “February was a relatively dry month across parts of the state bringing less than 50 percent of normal precipitation over the eastern third of Arizona and a few spots in northwest Arizona.” 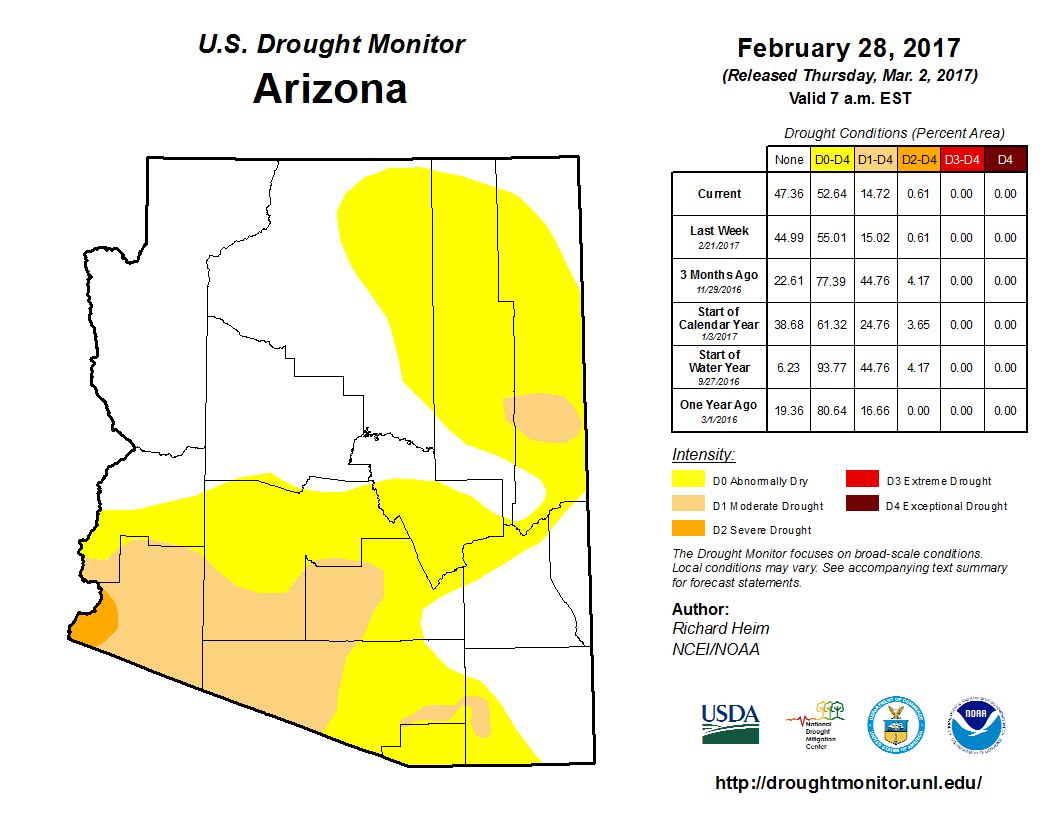 This may come as a huge surprise to residents of Maricopa, Yavapai, Coconino, Yuma and La Paz counties, where “much wetter than normal conditions” prevailed. But, then, central Arizona is where most of the residents of the state are too. Most Arizonans were getting wet from the same rainstorm.

It’s a big state. As State Climatologist Nancy Selover notes, the big storms brought plenty of cold air and snow to the northern and western parts of the state, but tended to short-shrift the eastern-mountain watersheds: “They have tended to miss the southeast and many of them have missed the White Mountains as well.”

The headwaters of the Salt and Gila rivers are “below average in snowpack for this time of year,” she said. “Though the Verde is above normal.”

That, Selover observed, is “all short-term drought.”

“We have not had the type of precipitation that will replenish our water resources, so we are not anywhere near being over the drought for long-term water resource concerns.”

Still, said Selover, February overall was “a helpful month” in terms of contributing to the 2017 Water Year profile, which depicts healthy moisture levels since October.

The National Weather Service map of Arizona depicting “Seasonal Precipitation, October 2016 – February 2017” may not have quite the “ripe eggplant” look as the Western snowpack map, but it’s not far off. 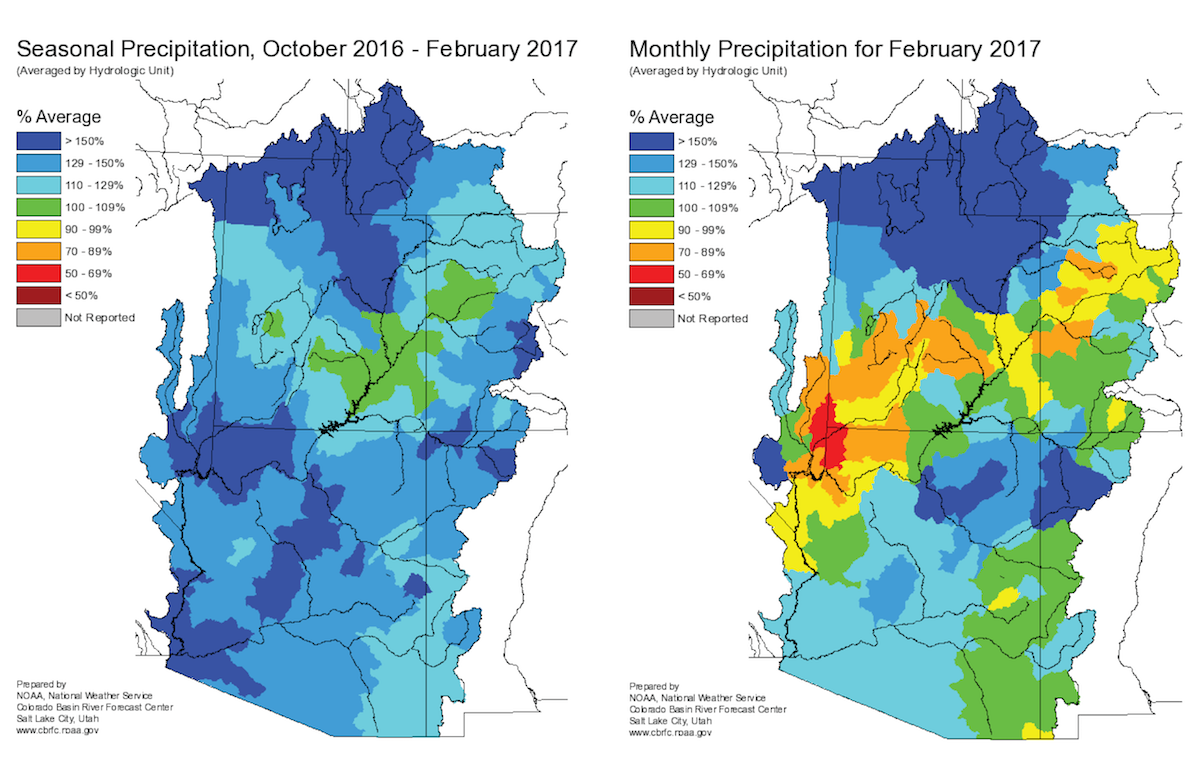 So where does this mostly-better-than-average winter leave Arizona?

As a part of the Southwestern region? Great: “The Upper Colorado Basin is in great shape this year so far, but we need three or four more consecutive years like this to make up for the deficits,” said the State Climatologist.

But Arizona, specifically? Good, sure. But not great:

“For my money, we are entering the 23rd year (of drought) now,” said Selover.