The World Water Congress, an event hosted every three years by the International Water Resources Association to promote discussion and share knowledge about water issues world-wide, is meeting this week in Mexico.

On Wednesday, the Arizona Water Resources director served as a speaker in a panel discussion on Colorado River system cooperation between the U.S. and Mexico.

Minute 319, a similar agreement executed in 2012, included important water-conservation policy provisions, including a voluntary agreement by Mexico to reduce deliveries when the U.S. Lower Basin is in shortage. That plan that would take effect should Lake Mead fall below critical levels. Minute 319 is set to expire at the end of 2017. Minute 32x would update and add to the expiring agreement. 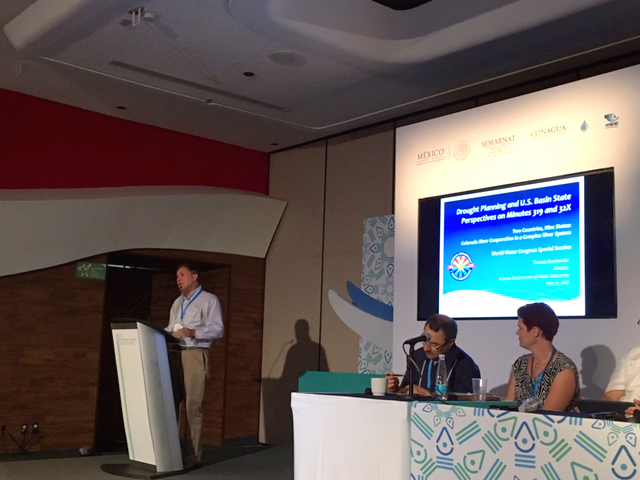 Director Buschatzke emphasized to the World Water Congress audience that managing the Colorado River requires an active, involved “all hands on deck” philosophy. That means that the terms of sharing in the surplus, as well as the shortage and scarcity, of Colorado River water require achieving parity and alignment between the U.S. and Mexico.

The next step in resolving Minute 32x is to finalize domestic agreements among the U.S. and the Colorado River Basin states that relate to 32x.

The announced moderator of the panel discussion was Sally Spener, U.S. Secretary of the International Boundary and Water Commission.

A key goal of the World Water Congress is to bridge the disconnect between scientific knowledge and policy choices.