The Water Resources budget: Gov. Ducey and the Legislature are providing the tools

The Water Resources budget: Gov. Ducey and the Legislature are providing the tools

The Water Resources budget: Gov. Ducey and the Legislature are providing the tools
Published: June 1, 2017

The budget numbers for the 2018 fiscal year are in – approved by the Arizona State Legislature and signed by Gov. Doug Ducey – and, once again, Arizona’s elected leaders have demonstrated a strong commitment to the management and expansion of water resources in both Arizona and the Southwest.

Even in a year of tight fiscal constraints, the governor and the legislature deemed it necessary to continue the work started in January 2016, when Gov. Ducey observed that “if there’s one thing Arizona is best in the nation at – it’s water.”

At that time, the governor directed the Arizona Department of Water Resources to explore new, long-term sources of water for the state, explore additional conservation opportunities, and identify future infrastructure needs. 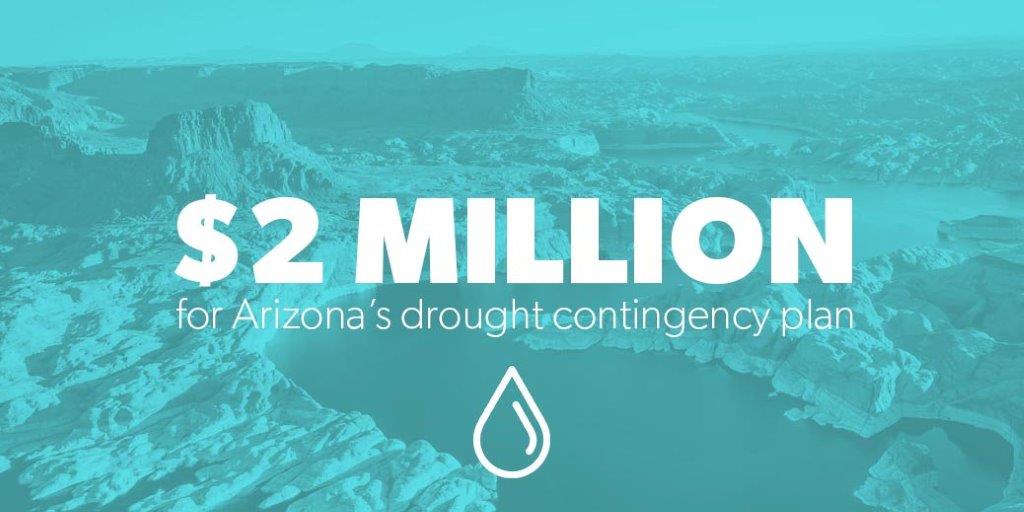 By “green-lighting” the department last year to use existing dollars to provide additional experts to the staff to do those jobs, he gave Water Resources the tools to get those jobs, and more, done.

The new FY 2018 budget includes evidence of those additional tasks the governor and the legislature expect the department to shoulder. They include assuming an even stronger leadership role in the defense of the Colorado River system, notably by acting proactively to protect water levels at Lake Mead.

Water Resources Director Tom Buschatzke received a non-lapsing appropriation of $2 million per year for three years (between 2018 and 2020) for conserving water in Lake Mead.

That amount represents Arizona’s contribution to a Colorado River Basin-wide effort to stabilize the great reservoir, a critical source of water for nearly 40 million people in the Southwest.

In addition, the department has won further authority to add – in Gov. Ducey’s words from his 2016 State of the State speech – “experts who can take these plans and make them work.” The FY ’18 budget authorizes an additional ten full-time equivalent positions for the department.

The budget also includes a $200,000 allocation for Navigable Stream Adjudication and $200,000 appropriation to the state Auditor General for a special audit of the Central Arizona Water Conservation District, a report that the Legislature made due by December 31, 2017.

The Arizona Water Protection Fund also received an allocation of $250,000 to support grants that improve watershed management and riparian restoration across the state. The Water Resources department also provides technical and staff support to the Water Protection Fund.