Strictly in terms of aesthetics, it is the perfect time to skim several hundred feet over Arizona’s oldest water-delivery system -- the two series of dams and reservoirs operated by the Salt River Project that provide the Valley with its largest supply of in-state surface water.

The air – sparkling and clear between February storms -- is satisfyingly crisp. The landscapes are verdant from the abundance of moisture unleashed this winter on Arizona’s mountainsides. It’s poised for a magnificent bloom of spring wildflowers that now is just a week or three away.

Eagle pairs are nesting. Wild horses are frolicking in the Salt River. And water is flowing in nearly every wash and cascading down nearly every mountainside. 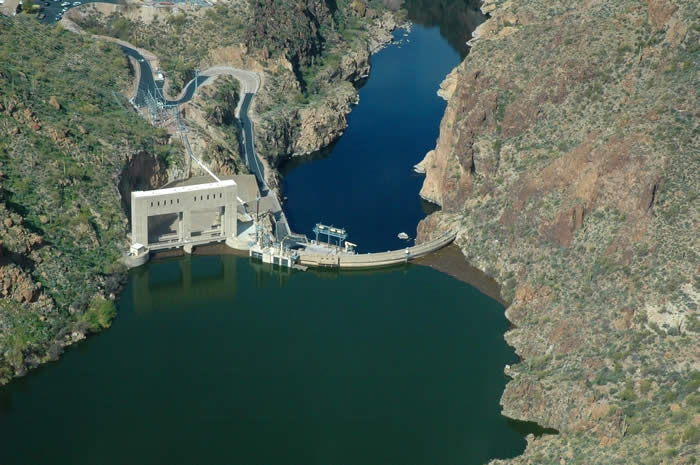 After years of epic drought and disappointingly dry “El Nino” weather patterns, it is an invigorating moment to be strapped into a Salt River Project helicopter on a mission to examine Arizona’s north-eastern mountain watershed. 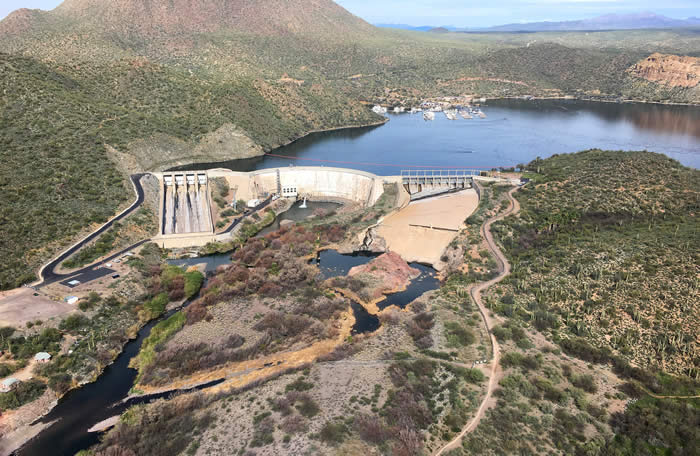 They took us up in SRP’s Bell 212 Twin Huey, a heavy-duty workhorse that, among other duties, is used to hoist SRP linemen atop major transmission lines.

The one and a half hour tour traveled northeast from SRP’s east Phoenix facilities, flying first over the Verde River watershed and Bartlett and Horseshoe dams, then southeast to the Salt River system and the oldest and mightiest dam in the SRP system, Roosevelt Dam, which when full can hold back over 1.6 million acre feet of Arizona rainfall and melted snowpack.

The sights were encouraging.

Both Bartlett and Horseshoe lakes – themselves two of the most popular recreation areas in the state – were effectively full.  Ironically, that abundance of water stored in Bartlett isn’t the best news for campers – there isn’t a lot of shoreline evident for trailers and campers.

Even in drier years, the Verde watershed produces far more water than the SRP-operated system can hold. System releases are inevitable, and with Bartlett and Horseshoe effectively topped off, the system already is letting water flow toward the Valley.

The releases, which started February 10 at about 500 cubic feet per second, reached as much as 22,000 cfs at the end of the month. While the releases are varying, they are significant enough to make a statement about the abundant rainy season. 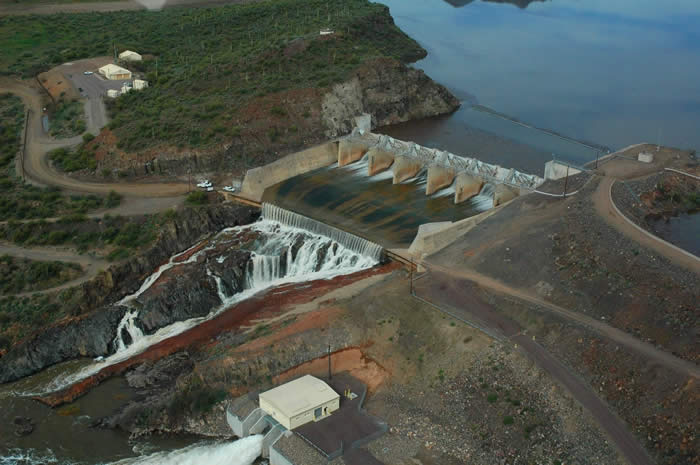 The truly encouraging sight on the tour, however, is the condition of Roosevelt Lake. At 35 percent capacity in the middle of December last year, Arizona’s biggest in-state reservoir today is at 60 percent of capacity, a level not seen in six years.

SRP analysts are calculating that Roosevelt will rise at least to 80 percent of capacity this season if the winter storms continue into March. Indeed, they

surmise there is an outside chance the lake will fill up. 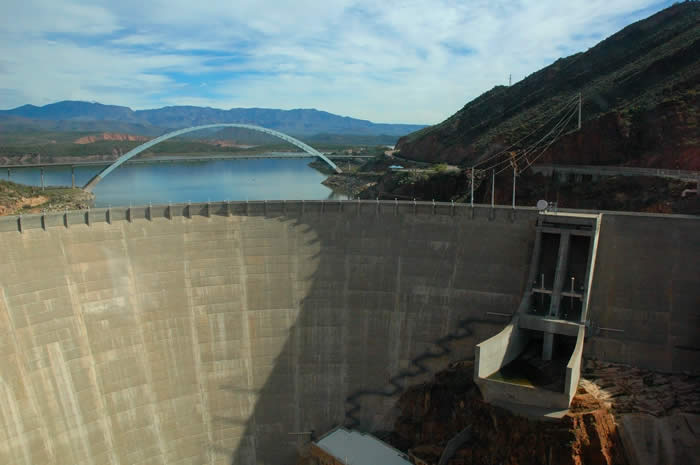 Our guide points to the new brickwork on Roosevelt Dam – the water level is just a course or two of bricks below the point where the dam was raised 77 feet in 1996, increasing storage capacity by 20 percent.

“We’re up more than 30 percent since December,” says Ester. “The snow survey we took yesterday indicates there is more snow up there than we’d anticipated. So, as long as we keep getting storms, there is a good chance we’ll fill Roosevelt this year.”

(A career-long SRP employee, Ester recalls that “as a kid,” he would put sticks in water after rainstorms to measure depth: “Who knew that as an adult I’d be doing the same thing?”)

The southwesterly flight back toward Phoenix takes us through the majestic Salt River canyons leading to Horse Mesa, Mormon Flat and, ultimately, Stewart Mountain dams.

It is like a winding river-raft tour through the Grand Canyon – a point not lost on our guide, Ester, who has waterskied on Canyon Lake behind Mormon Flat Dam many times:

“It’s great waterskiing,” he says. “You’d swear you were waterskiing in the Grand Canyon.”