The Mission to Protect Lake Mead 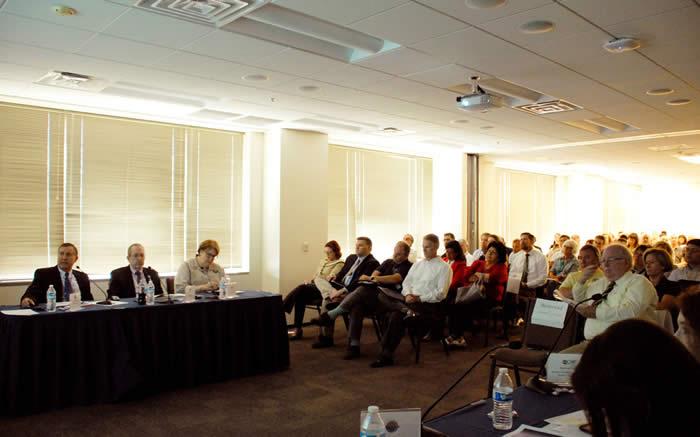 The Mission to Protect Lake Mead

ADWR and CAP brief the public on the future of the Colorado River system
Published: August 24, 2016

Regarding the Colorado River system, it was the ultimate “good news/bad news” message:

“While we won’t be heading into shortage for 2017,” said Lisa Atkins, board president of the Central Arizona Project, “the risks remain for 2018, and they continue to increase.”

Added Atkins: “And that certainly is not news to anyone in this room.”

The people “in this room” were the dozens who had gathered at the Arizona Department of Water Resources offices, as well as numerous satellite locations around the state, for a briefing on the status of the Colorado River system, and the plans to stabilize it.

A major focus of the briefing, of course, was on the future of Lake Mead, the main system reservoir. At a current water elevation of 1,074 feet, Lake Mead is just 37 percent full.

The August 22 briefing was co-hosted by Water Resources and the Central Arizona Project. Not by coincidence, the Water Resources and CAP directors scheduled the briefing to immediately follow the federal Bureau of Reclamation report on the anticipated flows in the Colorado River system.

The briefing was the second public briefing held by Water Resources this year to help inform the public of the fragile condition of the Colorado River system, and about efforts to sustain it. In addition, CAP officials recently held a series of three similar briefings for stakeholders of CAP’s 336-mile water-delivery system.

The bottom line from the federal report indicated that water levels from Colorado River water entering Lake Mead will be enough to keep the system from falling into the first allocation-shortage declaration in the system’s history.

Under a system-wide agreement reached in 2007, Arizona and Nevada would be required to give up a portion of their river allocations to help stabilize the lake.

Under a more comprehensive agreement known as the Drought Contingency Proposal – a complex deal still being negotiated among the Lower Basin stakeholders – California would join into the stabilization effort once Lake Mead descended to less than 1,045 feet in elevation.

As reported at the August 22 briefing, recent conservation efforts – led largely by Arizona – helped fend off an emergency declaration. In the last several years, savings programs created by the states, water providers like CAP, and Mexico have contributed nearly ten feet of depth to Lake Mead. 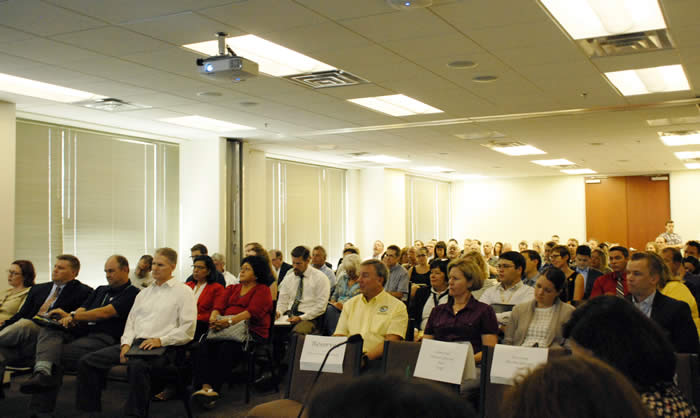 According to CAP general manager Ted Cooke, that was enough to avoid shortfall declarations in 2016 and 2017 that could have cost Arizona dearly:

“Conservatively, that is ten to 20 billion dollars of economic value to the state of Arizona.”

Which was the good news. The bad? According to Reclamation’s report, the likelihood of a shortage declaration in 2018 has spiked to better than even odds.

Fending off a shortfall, said Tom Buschatzke, director of Water Resources, “will take patience. And time. And incremental progress will be the path to success.”

Buschatzke has been deeply involved in negotiations with other state and federal representatives to secure a drought contingency proposal, or DCP, that would cement state responses should Lake Mead continue to see lower water levels. 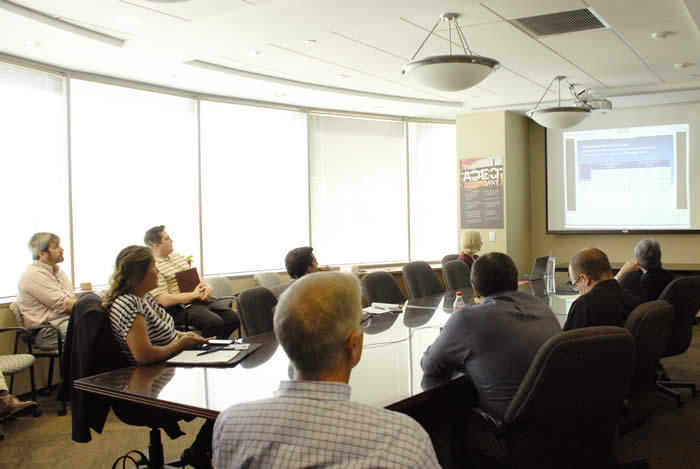 The Water Resources director spelled out to the audience some sobering facts about what it may take to stabilize Lake Mead should the reservoir descend to critical levels.

By 2023, for example, it would take 3 million acre-feet of water in a single year to protect the reservoir, should nothing be done now to stave off that uncertain future. Other scenarios that include the effects of climate change, he said, could double the amounts of water needed.

For the sake of perspective, Arizona’s entire annual allocation of Colorado River water is 2.8 million acre-feet.

“Shortages in this range here are probably something that we are not prepared to deal with,” Buschatzke said.

CAP General Manager Cooke took the opportunity of the Lake Mead/Drought Contingency Proposal briefing to send a message to proponents of a plan to “decommission” Glen Canyon Dam, which would result in the draining of the system’s upstream reservoir, Lake Powell:

“Without having those two lakes (Powell and Mead) working conjunctively, we would not be in the condition that we’re in right now. And that’s in a good sense,” said Cooke.

“Lake Powell is the lake that allows the Upper Basin to deliver its commitment of water to the Lower Basin every year. Without that lake that wouldn’t happen. If you think back, if we had not had two lakes, instead of having two half-full lakes, we’d have one empty lake right now.”

Cooke’s organization, the CAP, has just launched a multi-media campaign – “Protect Lake Mead” – dedicated to increasing public awareness about the vital nature of Lake Mead to the entire Southwest.