A historical examination of the AZ Groundwater Management Act of 1980
Published: November 23, 2016

(This is the second of a two-part historical examination of the Arizona Groundwater Management Act of 1980. Part 1: A question-and-answer interview with former Gov. Babbitt)

Former Arizona Governor and former Interior Secretary Bruce Babbitt recently agreed to talk with the Arizona Department of Water Resources about the landmark Arizona Groundwater Management Act, which was passed under his watch as governor in 1980, as well as some related water issues. 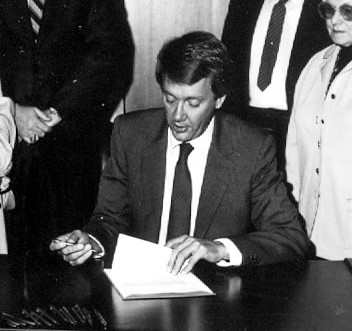 Babbitt served as Arizona’s governor from 1978 to 1987, and as Secretary of the Interior in the Bill Clinton administration from 1993 to 2001.

Today, Babbitt is chairman and president of Raintree Ventures, whose primary client is the state of California.

ADWR: What was the major motivation for passing the Act? Was it largely urban over-reliance on groundwater extraction?

Babbitt: Sometimes things have to get so bad that it’s almost impossible to do anything more before people really come together.

The issue of groundwater had been getting progressively worse for 30, 40 years. It was going to reach the point that a variety of things had happened. Most notably, the state courts had enjoined the mines from transporting water. I think the urban representatives were starting to see it. Their future was affected.

The Interior Department was getting restless over the Central Arizona Project because the (CAP) law had language saying the state had promised to control its groundwater over-drafting. Those forces all came together.

The whole structure was ready to collapse. And, sometimes, it’s that kind of disaster that finally motivates people to do what they perhaps should have done much earlier. But the table was set when I took over those negotiations. 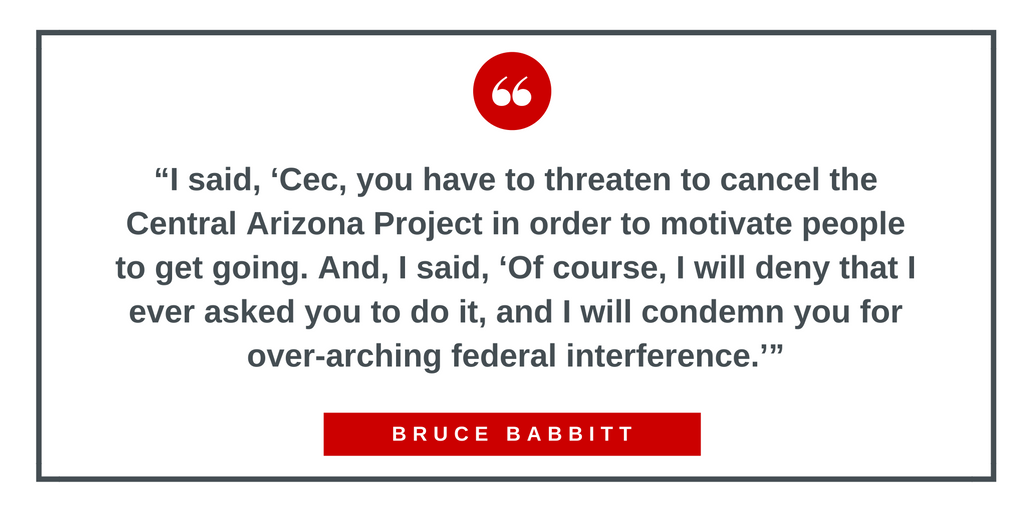 ADWR: The lore of the law is that it was an unprecedented piece of bipartisan negotiations. But you brought up the feds. Is it fair to say that the feds played a role by leveraging the CAP?

Babbitt: Oh, yeah. We negotiated in private, outside the Legislature, for I would guess more than a year. We had the great good luck of having tremendous legislative leadership in the presence of (House Majority Leader) Burton Barr in the House and Stan Turley who was President of the Senate, and Alfredo Gutierrez, who was the Democratic (Senate minority) leader. Really, really, great leaders. 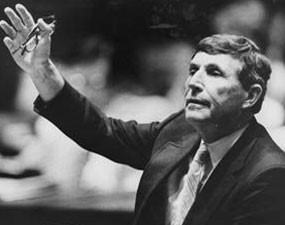 Interior Department was in the background for the first 90 to 95 percent of the negotiations. But as we reached an impasse, I contacted Cecil Andrus, who was then the Secretary, and said we need to get the Interior Department suited up and into the game. I kind of made a deal with him.

I said, “Cec, you have to threaten to cancel the Central Arizona Project in order to motivate people to get going. And, I said, ‘Of course, I will deny that I ever asked you to do it, and I will condemn you for over-arching federal interference.”

But it worked. He came to Arizona and kind of read the riot act and it motivated people and we were able to cross the last ten yards as a result of that.

ADWR: That’s marvelous inside baseball. But how did a Democratic governor get conservative Republican legislators to buy into this?

Babbitt: Well, bear in mind that the Legislature had failed, again and again, over the preceding decade. They’d put up groundwater study commissions. They’d actually been unable to do anything.

The leadership agreed at that point that we’d take a really unusual step and take it entirely out of the legislative process and set up a negotiation behind closed doors with the interest groups – the mines, the cities and agriculture – and the legislature would basically stay out of it except for the participation of Stan Turley, who kind of reported back to the Republican leadership that we were making progress. 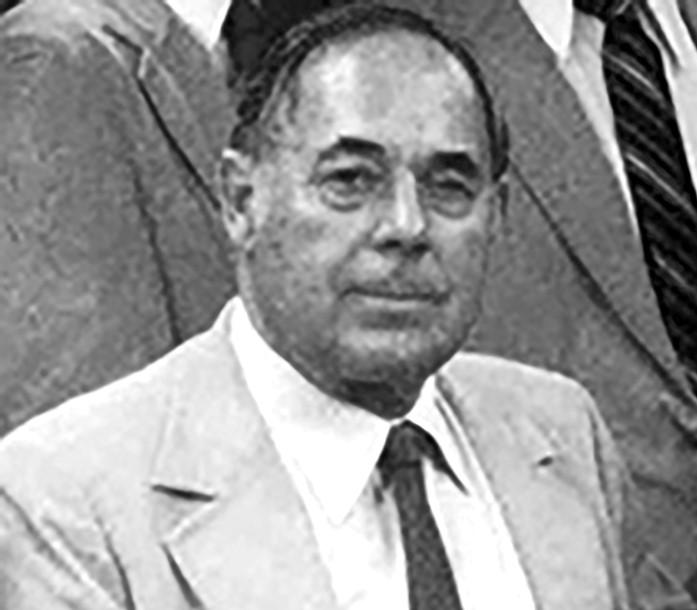 And, remarkably, once we had drafted the bill – several hundred pages – I called a special session of the Legislature. In June of that year. The bill was introduced and passed in one day, with no amendments, and virtually no debate.

Now, I suppose people who worry about process and open meetings and transparency would say that was hardly the way to pass a law. But the times demanded it. It was an urgent issue. And in the context of what had to be done, the members of the Legislature just stood aside. And we got it done.

ADWR: Now, the law excludes the rural counties of Arizona, in large part. Why was that the case?

Babbitt: That’s an important line that was drawn.

The basic issue is: It was the big desert groundwater basins in Maricopa, Pinal and Pima counties where the problem was because on top of those basins is 98 percent of Arizona’s irrigated agriculture, and Phoenix and Tucson. That was the urgent issue.

Looking across the rest of the state we basically said, “we can’t deal with everything at once. There’s still time in the future to think about it."

But, that time has now passed. It’s been – what? One, two… 30 years have passed, and that puts us in front of one of the next big challenges. We really need to have a legislative framework for managing groundwater for the rest of the state.

I think the framework would be quite different. Because the issues in rural Arizona are… there’s a lot of groundwater up there. There’s no crisis in most of the areas. But there will be.

The big issue in the rest of the state is how do you manage water, and groundwater, so that you don’t dry up the surface resource?

What we’ve seen in the rest of the state is this: a close connection between the surface hydrology – the streams that are so important for recreation and many other purposes – they’re closely connected to the groundwater. We need to recognize that connection, which is sort of a dominant idea whether you’re on the San Pedro, the Verde, Oak Creek or the Upper Salt River, and formulate a law that speaks to that.

It would be quite different from the Groundwater Act of 1980 because it deals with a different problem.

ADWR: In many rural areas, the issues are much more basic, aren’t they? There isn’t even the metering of groundwater use.

Babbitt: We’re dealing with this in California and other states right now. You can’t manage water without knowing how it’s being used. We now have well-measuring technology that is simple and relatively inexpensive. We ought to have a statewide provision which says that all water withdrawals, above a few gallons per minute, all of them must be metered and reported.

It’s done under the Groundwater Management Act of 1980 in the three urban counties. It ought to be done statewide.

ADWR: Regarding CAP – the construction of the CAP system was critical to making the 1980 law work. How does it work in rural areas where there is no CAP water?

Babbitt: The whole premise of the Groundwater Management Act is that it would push the cities and agriculture to using the Colorado River water supply. Now, we’re in a new drought period and there’s going to be a big discussion about how much CAP water there’s really going to be.

There is no question that our predecessors in Arizona – starting with Gov. (George W.P.) Hunt back at the turn of the century and going all the way up for decades up into the 40s and 50s and 60s – Arizona kind of took this “It’s us against the world; the enemy is California; we’re not going to cooperate; it’s a zero-sum game (attitude).”

That’s all ancient history. But the lesson from that intransigence and the failure of our political leaders back in those days is that cooperation is now the name of the game. I think that is finally beginning to sink in. And I think that the (Central Arizona Project) and the Department of Water Resources are doing that in these shortage negotiations on Lake Mead.

Really important. We should not be waving the bloody shirt and blaming California and Nevada. We’ve got to work with them, and I’m really pleased to see that that’s now happening.