The Myth of Western Water Wars

The Myth of Western Water Wars

Water is for fightin’ over.

At pretty much every public gathering on the subject of water in the Southwest, somebody will observe the Great Truism about what happens when water becomes scarce.

We fight over it. And, as the saying also goes, we drink whiskey after we’re done fightin’. Or before. Because whiskey’s for drinkin’. As opposed to water. Which, as noted, is for fightin’.

At every water conference, every public meeting on the on-going drought, every gathering of water professionals, somebody says it. Whiskey’s for drinkin’; water’s for fightin’. Because that is what people in the Southwest always have done when the water hole dries up. And everyone laughs because everyone knows it to be true.

Only it’s not true. Not always true, anyway. And it’s especially untrue at those times when water scarcity becomes a genuine community-wide concern. Like now.

According to one of the Southwest’s most respected water journalists, the real story of water in the arid Southwest over the last 100 years or so hasn’t been fightin’.

According to journalist and author John Fleck in his new book, Water is for Fighting Over and Other Myths about Water in the West, the real story of water in the American Southwest has been the (often begrudging) willingness of stakeholders to act in congress, often against their own apparent self-interest, to assure everyone’s taps keep running. 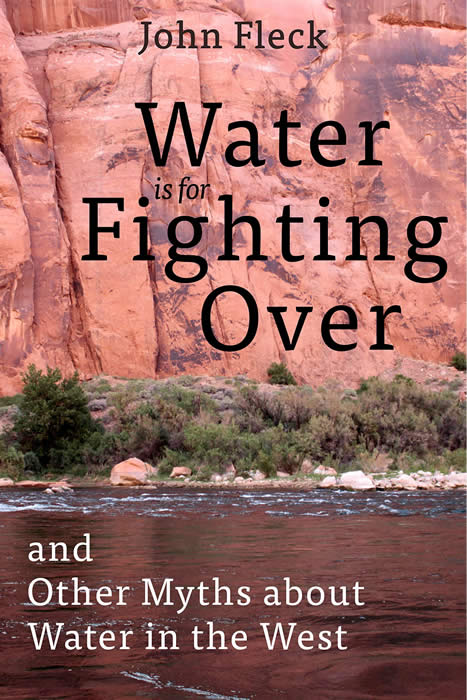 “The most pervasive of the myths is that we are ‘about to run out of water,’” writes Fleck, now the director of the University of New Mexico Water Resources Department.

“This ignores history, where again and again we have seen both city and farm communities adapt and continue to grow and prosper without using more water, often, in fact, using less.”

Currently ranked No. 3 on Amazon’s best-seller list of non-fiction books on environmental policy, Water is for Fighting lays out a human-scale case for why predictions of drought-induced Armageddon in the Southwest are wrong.

Fleck recalls landmark moments – both big and small – in the Southwest’s water history in which seemingly intractable conflicts over scarce water resources ultimately were resolved. Invariably they would be settled as a result of civil-minded negotiation, and, oftentimes, as a result of chance meetings that blossomed into mutual understanding.

The very existence of the now lush Cienega de Santa Clara wetlands in northern Mexico, writes Fleck, was the end result of a chance meeting of environmental activist Jennifer Pitt and Sid Wilson, at the time general manager of the Central Arizona Project.

The CAP executive and the environmental leader met on a river raft trip down the Colorado River. Until then, Wilson had been adamant that every available drop of Colorado River water ought to be put “to human use.” That point of view threatened the existence of the Cienega, which relied on brackish system water for its existence.

Eight days on a river raft “wearing shorts and drinking beer” (as Pitt recalled) helped them to find common ground. As Fleck describes it, that sort of mutual accommodation has proved out time and again in the Southwest.

“We don’t give ourselves enough credit for our successes,” said Fleck on Wednesday to KJZZ radio host Steve Goldstein.

In the years prior to the construction of Hoover Dam, Fleck writes that Arizona often was “its own worst enemy” for its persistent battles with California.

That brashness has ebbed.

As Fleck notes, Arizona has “played the role of collaborator” in recent years to protect Lake Mead, and has worked to “solve its own internal water-management problems” with the help of the landmark Groundwater Management Act of 1980.