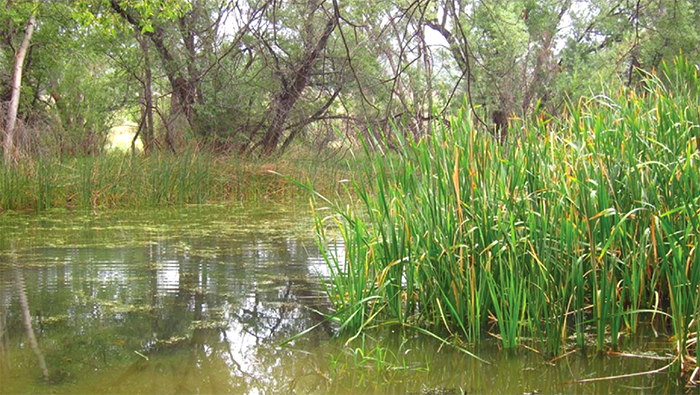 Think of it as a sort of environmental auto-body shop.

Each year that the legislatively enacted Arizona Water Protection Fund has had money to spend, it has taken on the task of helping fix habitat with a lot of dings on their bumpers. So to speak.

“It’s nice to see that they come to fruition,” said executive director Stephanie Smallhouse of the projects the Water Protection Fund helps finance. “If somebody has a problem and they have the solution and just need the funding, it’s nice to be able to provide that.”

The habitat-fixing Fund was created by the state Legislature in 1994. As reported at the time, the Legislature sought to help stabilize and repair damaged riparian ecosystems before they got so serious that the federal government might step in on behalf of endangered species.

“What I’ve been told is that the point of it at the time was to be able to do state-level projects to address what might become federal-level issues,” said Smallhouse, who has been on the job two years.

The program, which is administered through the Arizona Department of Water Resources, is designed to encourage landowners and others to take “proactive approaches to perhaps address water quality or quantity issues before they are regulated to do so,” she said.

Each year, the Fund considers habitat-repair projects it might fund. That process started this year in August, reaping a total of eight proposals as of the October 14 deadline. Typically, the Fund averages 8 to 16 applications per grant cycle.

The public comment period for the applications begins November 1, continuing through to the first of December.

All told, the Fund’s commission will spend the next two to three months processing and reviewing applications. The commission will begin making its funding selections in January 2017.

In the lean years following the Great Recession, the general-fund dollars that the Fund relies upon proved scarce, limiting the Fund to supporting on-going projects.

This year, however, the Fund has resources to accept new proposals. According to executive director Smallhouse, the Fund has $600,000 to allocate this time around.

The Fund’s commission accepts applications from anyone -- except the federal government -- whose project addresses riparian water quality or water quantity issues. Several of the projects, especially in recent years, involve the removal of invasive salt cedar, which create chokepoints that redirect and stifle the natural flow of rivers and streams as well as putting a strain on local water supplies.

Getting a grip on invasive species is a part of at least half of this year’s eight applications.

One of them – a request from Prescott Creeks Preservation Association – is seeking around $280,000 to build on existing restoration efforts in the Prescott area along Granite Creek and its tributaries. Invasive species-management efforts constitute a major part of that restoration effort.

Other projects run the gamut of natural-habitat restoration.

One project outside of Flagstaff, for example, seeks funding for the restoration of naturally occurring springs. The Springs Stewardship Institute of Flagstaff is seeking about $199,000 to help finance its three-year effort to rehabilitate six northern Arizona springs.

In each case, the funded organizations will pay their bills upfront and be reimbursed by the Water Protection Fund.

“Generally it is a three- to five-year process,” said Smallhouse. “Everything (the grantee) spends is reimbursable, but they have to spend the money first.”

For more information about the Arizona Water Protection Fund grant program, go to the agency’s web site at http://www.azwpf.gov/ Once on the home page, click on “FY-2017 grant cycle. “