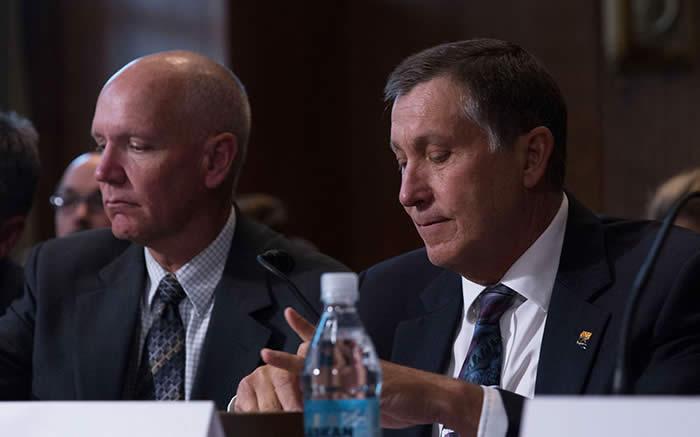 Director Buschatzke testified in support of S. 2902, which identifies five specific areas that may help defend critical water resources in the West. The measure was introduced by Sen. Jeff Flake, R-Ariz., and five other Western senators, including Sen. John McCain, R-Ariz.

A major part of S. 2902, said Buschatzke, is that it helps provide a crucial element of water supplies in the West: Certainty about its availability.

“Despite the actions and choices made by Arizona, uncertainty remains and the vulnerability of our water supplies to drought is a matter of constant attention among water providers, water users and water managers around the state,” said the Water Resources director before the subcommittee, which was chaired at the time by Flake.

“Flexibility to manage water supplies and adaptation to drought conditions are part of Arizona’s history and will continue to be a key management strategy now and in the future.”

As proposed, the measure would:

Buschatzke spoke to the Senate subcommittee one day before his Water Resources department and managers of the Central Arizona Project hosted a public briefing of challenges facing Arizona, California and Nevada – the so-called Colorado River Lower Basin states -- as water levels in Lake Mead continue to drop.

The director briefed the senators on many of the same issues raised during the public briefing in Phoenix, including the increasing probability that supplies of Colorado River being delivered to Lake Mead will not be enough to meet demand.

“The probability of a shortage declaration in the Lower Basin of the Colorado River has been steadily increasing during the past few years,” he said. Buschatzke noted that according to existing agreements, Arizona’s allocation must all but evaporate before California loses a drop of its allocation.

“Arizona shoulders the burden of the shortage among the three states and Mexico, about 84 percent of the total,” he said.

Buschatzke’s testimony culminated a year-long effort by Arizona Gov. Doug Ducey and Sens. McCain and Flake to increase interaction on drought issues between Arizona state government and Arizona’s federal delegation. Flake had asked the Water Resources director to reach out to Arizona water users in order to gain support for his proposed legislation, which he did.

“The concepts developed in the Flake bill were developed among a broad group of (Arizona) constituents,” said Buschatzke.

The testimony of ADWR Director Buschatzke on behalf of the Western Water Supply and Planning Enhancement Act (S. 2902) on May 17, 2016, before the U.S. Senate Committee on Energy and Natural Resources Subcommittee on Water and Power can be found here.