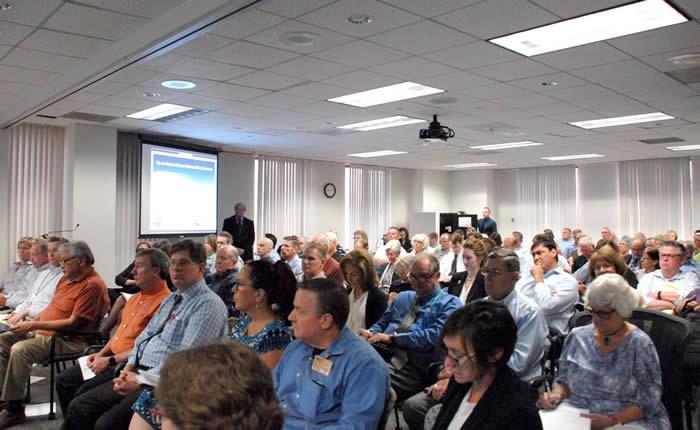 An overflow crowd, in four separate locations around Arizona, heard the long-anticipated news on Wednesday about the likely near-term future for Colorado River flows. Full length video from the briefing is available here.   (Presentations given at the briefing are available here)

With a few exceptions, the outlook presented was sobering.

Organized by the Arizona Department of Water Resources and the Central Arizona Project, the gathering was the second Colorado River shortage-briefing in as many years.

According to data analysts for Water Resources, the CAP and the federal Bureau of Reclamation:

A “shortage declaration” – a finding by the Bureau that Colorado River flows into Lake Mead are insufficient to meet demand – is increasingly likely over the next five years, although water levels in Mead should remain high enough to avoid a shortage declaration before 2018. The big question of the day, however – the one prompting hundreds of people to stream into the Water Resources offices, as well as into satellite locations of the presentation around the state – regarded what happens next: 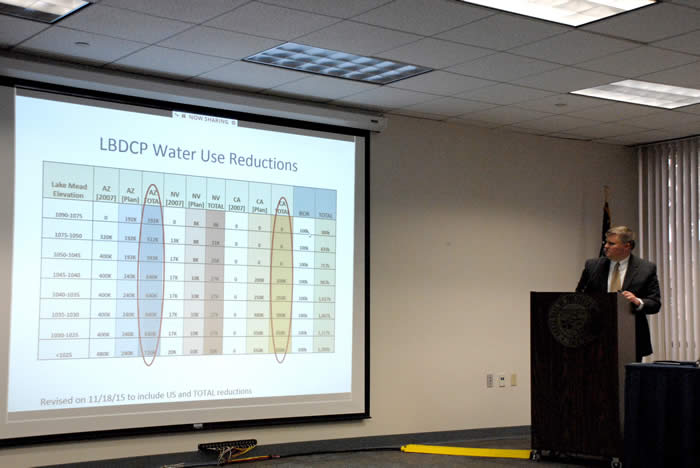 What – exactly -- happens when Lake Mead’s depth sinks below the shortage trigger point of 1,075 feet?

According to guidelines put in place in 2007, Arizona and Nevada begin to take shortages when the water elevation in Lake Mead falls below 1,075 feet. The volumes of shortages increase as water levels fall to 1,050 feet and again at 1,025 feet. In 2012, Mexico agreed to participate in shortages at the same elevations. The law exempts California from shortages until the entire CAP supply is reduced.

For weeks – ever since the Bureau of Reclamation first announced in mid-April that Mead would finish the calendar year a scant three feet above levels that would trigger water-delivery reductions – interest has built over what actions the Lower Basin states of Arizona, Nevada and California are planning. 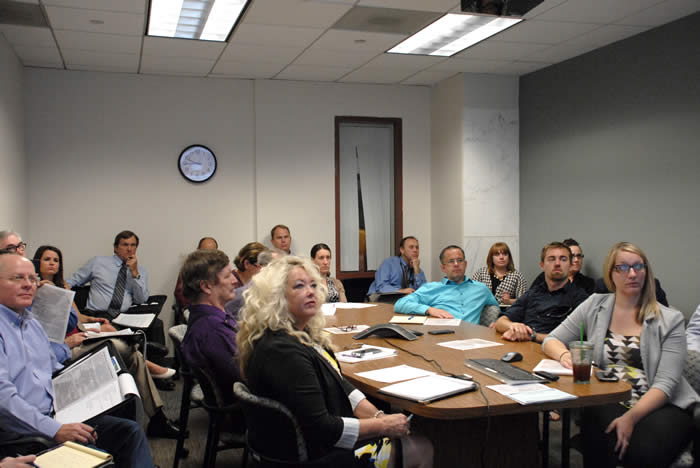 On Wednesday, Arizona’s water managers laid out some precise details of what the consequences of a shortage declaration may entail – as well as the much-discussed “Drought Contingency Plan,” or DCP.

While the DCP remains under negotiation among Arizona water-users, as well as among the states, Water Resources Assistant Director Clint Chandler graphically outlined the DCP as it now exists.

“Until the drought relents, the people of Arizona expect us to proactively respond to the challenges,” said Chandler, pointing to a set of May 18, 2016 slides outlining the proposed Drought Contingency Plan. “We won’t let them down.”

The plan to stabilize Lake Mead is tied to descending water levels.

The proposal also calls for California to begin participating in reductions when Mead falls below 1, 045 feet, at which point it would reduce its annual 4.4 million acre-foot allocation by 200,000 acre-feet. California’s reductions would increase as Lake Mead water levels fall, culminating in a 350,000 acre-foot reduction at 1,030 feet. The inducement for California to give up its “senior” status on the Colorado River is the same factor that motivates Arizona and Nevada: seeking certainty for water supplies. 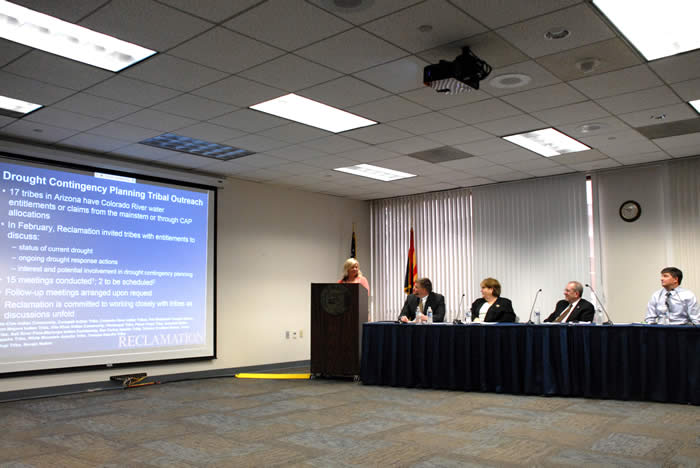 Coincidentally, Arizona’s lead negotiator on behalf of its Colorado River allocation rights, Water Resources Director Tom Buschatzke, was unable to attend the shortfall briefing, for good reason: He was en route to Arizona from Washington, D.C., where he had briefed a Senate subcommittee on precisely the same, urgent issues. 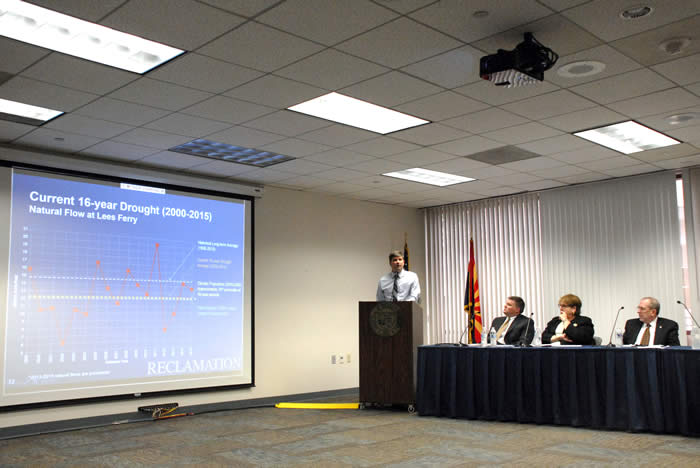 There, Buschatzke told members of an Energy and Natural Resources subcommittee that the steps Arizona already had taken to preserve Lake Mead were the end-result of “hard choices (made) over many decades” by Arizonans and that any final decision on a drought-deficiency plan would represent consensus among “a broad group of water users.”

Briefing panelist Lisa Atkins, the president of the Central Arizona Water Conservation District, observed at the end of the briefing that “water is a legacy issue with Arizona” and that “we have to keep our sleeves rolled up.”

“The system has reached that tipping point that we knew would come one day,” said Atkins.

“We don’t manage water as an every-man-for-himself proposition. We rise together.”