Lake Mead Water: It's not always for "fightin" over 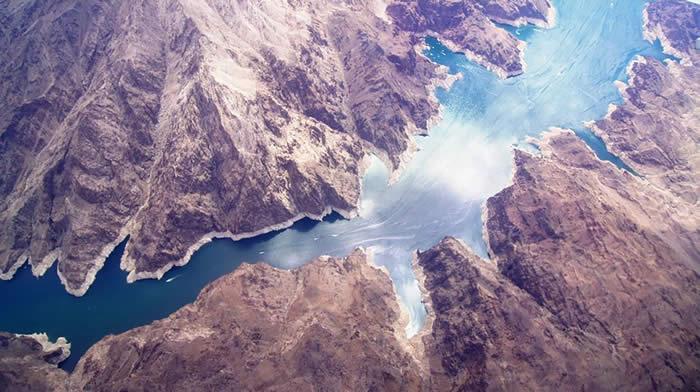 Lake Mead Water: It's not always for "fightin" over

The snarky slogan that “whiskey is for drinkin’ and water’s for fightin’” gets bandied about a lot in drought years.

Even after nearly 17 years of drought, there has not been a lot of fightin’ among the Southwestern states over the dwindling supplies of water in Lake Mead.

In fact, the level of cooperation among Arizona, Nevada and California, as well as the federal government, is a big part of why the federal Bureau of Reclamation likely will not issue a “shortfall” declaration in 2017 to protect water levels in Lake Mead.

That became clear this week when the Bureau of Reclamation released its 24-month forecast for the Colorado River system. Reclamation concluded Lake Mead most likely will finish the current year above the shortage triggering level. Not by much, mind you – just four feet or so. But by enough.

Of the total volume saved through the two big water-saving deals of 2014, Arizona contributed 85 percent of the water.

Since 2007, various water partners in the Lower Basin of the Colorado River have struck four major agreements to leave portions of their river allocations in Lake Mead. Including a big contribution from Mexico, those agreements added ten feet to Lake Mead’s water levels between 2007 and now.

So do the math: If the states had succumbed to that urge to fight over water rather than cooperate and, as a result, had added nothing to keep Lake Mead from falling to critical levels, then Mead right now would be at least five feet below the level that would trigger a federal declaration reducing Arizona’s river allocation severely.

The Bureau’s bi-annual report also concluded there is a better than 50 percent chance that the great reservoir will descend into critical levels sometime in 2018. But that projection assumes there will be little or no proactive, cooperative steps taken by Colorado River users to stave it off.

“It is a remarkable accomplishment to know that our willingness to make the hard decision and voluntarily leave water in the lake made the difference to avoid a shortage next year,” says Tom Buschatzke, Arizona Department of Water Resources Director.

“We’ll continue to take additional actions to protect the health of the Colorado River.”

There have been four conservation programs launched since 2007 to help backfill Lake Mead.

The most significant effort was launched in 2014. As a result of a memorandum of understanding signed by the Lower Basin States, a group of water providers led by the Central Arizona Project and the Bureau of Reclamation, 400,000 acre feet of water was left in Lake Mead. That helped raise the level by five feet.

Mexico also has contributed significantly to the health of Lake Mead. By the end of 2015, Mexico had left enough water in Mead to raise levels by three feet.

The other 2014 venture was the Pilot System Conservation Program, which again included the CAP and major water providers in other states. That raised Lake Mead by about two-thirds of a foot.

Significantly, Arizona’s willingness to contribute to a common cause has exceeded that of most other participants.

Of the total volume of water saved through the two big savings deals of 2014 – through the memorandum of understanding and “Pilot System” program, Arizona contributed 85 percent of the water.