According to lore, the federal Bureau of Reclamation – the managing agency of the Colorado River system – often takes advantage of the annual gathering of Colorado River states and water-users held each December to make big announcements.

Each year, water leaders from the Colorado River system states and the federal Bureau of Reclamation — as well as the system’s major water users, such as cities and agriculture — gather at CRWUA, sharing ideas about management of the most complex water system in the country, the Colorado River. 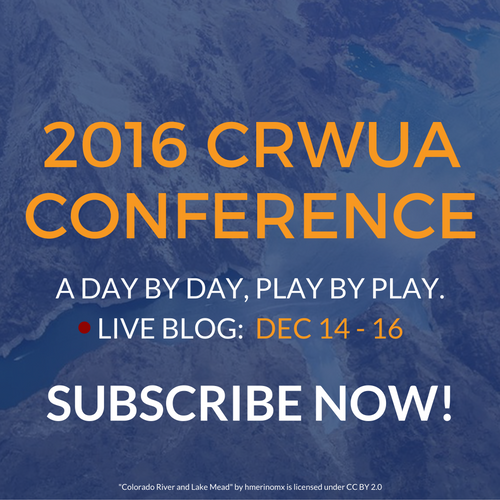 This year, the dominant theme is a familiar one: The unprecedented drought that consistently has reduced Rocky Mountain runoff and restricted flows between the system’s two great reservoirs, Lake Powell and Lake Mead.

The first “colloquium” of the meetings – “Communicating the Drought: A Call to Action” – reflects what has become the primary obsession of water managers in the Southwest: Taking action to protect the system, notably Lake Mead, from the debilitating effects of the 16-year on-going drought.

Representatives of the Arizona Water Banking Authority also will be at the CRWUA conferences, focusing on the recovery of Colorado River water stored in Arizona through the novel banking system.

State and federal water agency directors have not been the only public officials discussing water-management in Las Vegas this week, however.

Called the “BusinessH2O Summit,” the event promoted best water-management practices employed by both the United States and Israel, one of the world leaders in water conservation and management.

Ducey told the audience that water is an issue that “transcends partisan politics.”

The Arizona governor noted the well-known names from Arizona’s bipartisan hall of water fame – Sens. Carl Hayden, Barry Goldwater and Jon Kyl; Reps. John Rhodes and Mo Udall; and, Gov. Bruce Babbitt – all of them leaders who, he said, “understood the fundamental reality of life in the desert.”

Ducey also noted the on-going efforts to stabilize Lake Mead – efforts led by ADWR Director Buschatzke and others less than a mile from the U.S. Chamber gathering in Las Vegas.