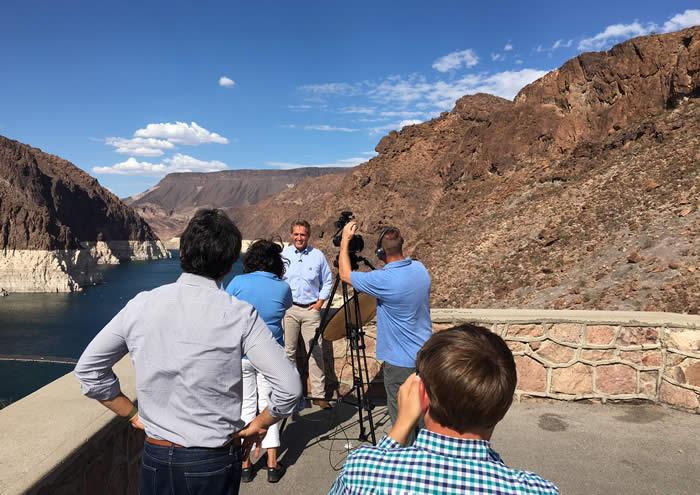 “I was pleased to discuss with Sen. Flake the proactive response by Arizona to challenges associated with the Colorado River system,” said Water Resources Assistant Director Clint Chandler.

“Our conversation (at Hoover Dam) included references to our State’s contributions, and those of other states and Mexico, to the system."

“Those efforts, which resulted in more water in Lake Mead, helped to avert a shortage declaration for 2017.”

The senator toured the iconic Hoover Dam facilities, which included a showroom providing a spectacular, panoramic view of the sprawling lake – notorious, stark-white “bathtub ring” and all.

Flake also took time to videotape a statement from the top of the dam on behalf of the Central Arizona Project’s “Protect Lake Mead” public-awareness campaign.

In addition to meeting with Chandler, Flake was briefed atop Hoover Dam on the great reservoir’s status by CAP General Manager Ted Cooke and by Terry Fulp, the regional director of the Bureau of Reclamation’s Lower Colorado Region. Reclamation is the federal agency responsible for managing Lake Mead.

The federal Bureau recently released its annual August study of the condition of the Colorado River system. That report predicted that Lake Mead’s elevation at the end of the 2016 calendar year would remain above the critical 1,075-foot level. Below that level, delivery cutbacks, including those to Arizona water users on the CAP system, could be triggered. 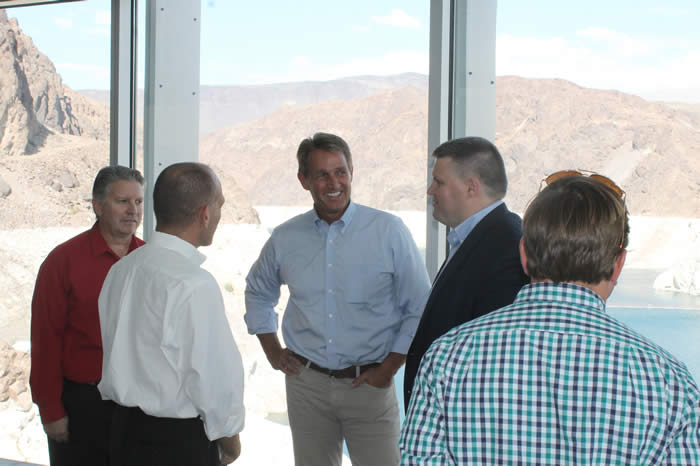 Flake acknowledged the state’s determined effort to keep that from happening.

“Arizona’s proactive actions to conserve water in Lake Mead have paid off,” he said.

Flake has made some headway this summer in the federal effort to protect Lake Mead, including Arizona’s portion of its water.

In July, Flake won a written assurance from the Department of Interior that water stored by Arizona users in Lake Mead to maintain higher levels would not subsequently be released to other states, notably California.

More recently, Flake’s lengthy negotiations with California Sen. Dianne Feinstein to improve inter-state cooperation on protecting Lake Mead appear to be paying off. He told reporters that the August study by Reclamation, which indicated a probable shortfall declaration in 2018, has helped kick-start an improved spirit of cooperation.

California water officials in particular, he said, are “more receptive.”

Feinstein, who has been working with Flake for years on federal drought legislation, recently reflected that more upbeat perspective. The California senior senator observed in early September that cooperative efforts between the states to protect the Colorado River system have taken on greater urgency.

“We have to get through this emergency,” Feinstein told the Sacramento Bee.

“And we have to realize that we have to store water – from the wet years to the dry years. And we have to go into desalination and into more recycling and more grants to the states.”

Flake also expressed optimism on his Hoover Dam/Lake Mead tour that a multi-state contingency agreement to protect the Colorado River system could be reached. But, like Feinstein, he acknowledged the enormous complexities involved:

“California stakeholders are still working to reach an agreement on the issue,” Flake said.