A river runs through them

A river runs through them

Advocates for decommissioning Glen Canyon Dam – and, so, draining Lake Powell --  are predicating their argument on a climate-change theory:

They believe the American Southwest is strangled by a drought that is never going to relent.

So, rather than operate two enormous water-retention dams holding back lakes doomed by a changing climate never again to rise beyond half-full (at best), the river’s managers should allow a liberated Colorado River to flow unimpeded into Lake Mead, and dole out water allocations from there.

With one lake surface rather than two, they say, less water will be lost to evaporation. Less water, too, will seep into the porous sandstone of Glen Canyon, according to those arguing the dam be retired.

According to calculations advanced by drain-the-lake advocates, an entire year’s worth of Colorado River flow has been lost to evaporation and seepage from Lake Powell since Glen Canyon Dam created the lake in 1963.

Others – notably, those river managers charged with the task of doling out the water – contend otherwise.

The flows of the Colorado River are, indisputably, intensely managed. By an agreement known as the Colorado River Compact of 1922, seven Southwestern states annually divide up at least 15 million acre-feet of the Colorado each year. Half goes to the Upper Basin states of Colorado, New Mexico, Utah and Wyoming. The other half to Arizona, Nevada and California.

In addition, the system sends 1.5 million acre-feet south to Mexico, half of which is delivered each year from Lake Powell.

An average of at least 8.3 million acre-feet each year has flowed the 300-odd miles from Glen Canyon Dam downstream to Lake Mead. As the Bureau of Reclamation – the Lower Basin system’s official federal manager – sees it, Lake Powell is the system’s “savings account,” to be drawn upon in times of drought.

Natural flows at Lee Ferry just downstream from Glen Canyon Dam have ranged from a low of 5.8 million acre-feet to a high of 24.5 acre-feet per year. The Colorado is as erratic as the snowpack of the Rockies.

If the snowpack is deep, runoff is ample. If it is light, as in recent years, it can be a challenge for system managers to meet demand. And the only reason a consistent flow of at least 8.3 million acre-feet has been maintained over the years is because Glen Canyon Dam is in place and doing its job. 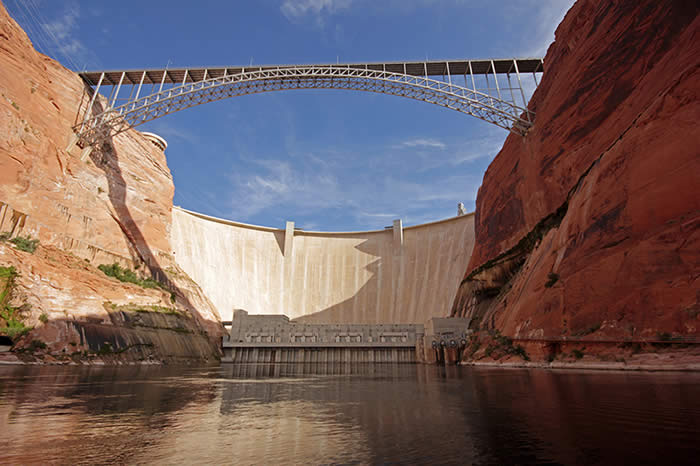 During the last 16 years of often extraordinary drought, water flowing into Lake Powell has met its historic average only three times – the lowest period of in-flow since the lake was created in 1963.

According to Bureau of Reclamation calculations, current conditions would have resulted in a delivery shortfall to the Lower Basin as early as 2001 if not for Lake Powell evening out flows. Following the severe drought years of 2000 to 2004, those shortfalls could have been catastrophic.

There are deleterious consequences to draining Lake Powell – which represents 42 percent of the entire system’s storage capacity -- beyond its function as a giant water meter.

With a relatively full lake, Glen Canyon Dam produces over 1,300 megawatts of non-polluting electrical power each year. Revenues from the sale of this power are used in large part for environmental protection efforts along the Colorado River, including in the Grand Canyon. Without that power generating, that funding source would be lost.

(In fact, the loss of carbon-free hydropower from Glen Canyon Dam would be far-reaching: By federal law, the dam provides power to several economically challenged communities and tribes in six Western states. Revenues from the sale of this power repay federal investment -- with interest -- as well as irrigation projects and salinity control measures in the Upper Basin states.)

The 65,000 to 100,000 acre-feet of sediment captured annually behind Glen Canyon Dam would cause woes upstream and downstream. Exposed, drying sediment in Glen Canyon would cause potentially serious airborne environmental issues. And sediment pushed downstream into Lake Mead would contribute to a far shorter life span for that reservoir.

But the primary issue is the water.

As of September 24, Lake Mead’s water level stood at 37 percent of capacity. Lake Powell’s level was at 53 percent. Descending water levels may leave Colorado River water users vulnerable to shortfalls sometime in the near future. The odds are rising.

But without Powell, shortfalls would have arrived perhaps decades earlier. And with far greater intensity.

The two great reservoirs working in tandem to dispense Colorado River water to seven states and to Mexico are not perfect plumbing fixtures. Undeniably, they “leak.”

But the key phrase is “in tandem.”

The four Upper Basin states are required by law to deliver the Lower Basin’s 7.5 million acre-feet allocation. Without the Powell reservoir, they would have been hard pressed in recent drought years to abide by the law without shorting themselves in the process.

It is not a given, meanwhile, that drought and delivery shortfalls are the only concern if Glen Canyon Dam is decommissioned. Without Lake Powell, high-water flows such as what we saw in 1983 and 1984 could cause large amounts of water to be spilled from Lake Mead, creating the prospect of severe flooding downstream.

Several legally binding water-sharing agreements – all of them anchored in the package of laws known collectively as “the Law of the River” – assume the existence of Lake Powell.

The most obvious of them is the Colorado River Storage Project Act, a 1956 act of Congress that authorized the construction of Glen Canyon Dam, as well as much, much more.

In fact, the 1956 Act created what we know today as the Colorado River “system.”

Lake Powell provides the Upper Basin states with a long-term source of stored water, allowing them to efficiently use their river allotments. It provides flood control and hydroelectric power. Along the way it created a spectacular source of recreation, and helped dramatically improve conditions for fish and wildlife.

It would take a similar act of Congress to “decommission” the dam. And, in the process, deconstruction the river system.

More recently, the 2007 Interim Guidelines – a drought-inspired shortage-sharing agreement among the Colorado River states – presume that their delicate balance of water allocations is made possible only because of the two great reservoirs working together.

Without Lake Powell, the water to be delivered to the Lower Basin states would be released from five separate, independently operated reservoirs located in four states, each of which maintains its own operational criteria.

Releasing precise amounts of water to users downriver would be like juggling balls of water… without a juggler: There is no single, unifying water manager on the Upper Basin system, as there is in the Lower Basin. The act of releasing water to the Lower Basin would be chaotic. And wasteful.

Taking one of the two great Colorado River system dams out of service would be like removing one of the wheels of your bicycle and presuming that everything will continue working just fine.

It won’t. Thirty-five million Americans, millions more Mexican citizens, and one of the most productive agricultural regions in the world have come to depend on the system as it operates today.

They depend on a Colorado River system with both “wheels” firmly in place.

This is the second of a two-part series about the future of Glen Canyon Dam and Lake Powell. The first part, “An Unplugged Debate,” was published September 29, 2016.