The Yuma MODFLOW model development began in the early 1990's. Previous to the early 1990's, Patten (1977) developed an electric analog groundwater model for the Yuma region. Patten's conceptual model was developed from the geologic and hydrogeologic study conducted by Olmstead et al. (1973).

In 1993 the ADWR released their MODFLOW groundwater model that simulated the time period of 1979-1989. Since the development of the ADWR model, the USGS has completed a study related to the model within the Yuma area (Dickinson et al.(2006) (SIR 2006-5135)). 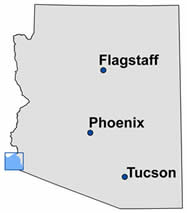