The Tucson MODFLOW model development began in the early 1990's. Previous to the early 1990's, three groundwater models within the Tucson region had been developed. In 1972 both Thomas Anderson and Otto Mooseburner developed electric analog models simulating the groundwater conditions within the Tucson basin. Anderson's electric analog model simulated storage depletion for the Tucson basin between 1940 - 1964. Mooseburner examined Avra Valley within his analysis. The third model was developed in 1984 by Bruce Travers and Peter Mock (ADWR) using a 2-dimensional model representative of the Tucson region.

In the early 1990's the USGS developed two MODFLOW models; one for the Avra Valley (WRI Report 90-4178) and one simulating the Upper Santa Cruz that incorporated the Tucson region (WRI Report 93-4196). Since the release of the USGS MODFLOW models for the Tucson region, the model has been updated to include 1940 - 1999 by Dale Mason and Lou Bota (ADWR 2006). ADWR has updated the Tucson model to include a steady-state/transient simulation from 1940 to 2010 and added several improvements to the model design. Model Report No. 24 documents the model updates; the model report and model data sets are available below. 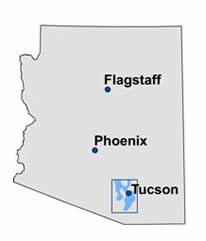 The Tucson model encompasses approximately 3,250 square miles including the city of Tucson.