The Santa Cruz MODFLOW model development began in the late 1990's. Prior to the late 1990's, Anderson (1972) developed an electric analog model for the region. Additional modeling efforts were conducted by Travers and Mock (1984) and Hanson and Benedict (1994). Beginning in 1997 the ADWR initiated a field monitoring program providing the data necessary for the ADWR conceptual model design and model calibration.

In the mid-2000's the ADWR developed two most recent models for the basin; the North Santa Cruz Model and Microbasins Model, simulating conditions south of the Nogales International Wastewater Treatment Plant (NIWTP). ADWR is currently using the models to evaluate the basin. In the future an ensemble of stream-aquifer boundary conditions will be available for use in the Santa Cruz AMA groundwater flow models to assess future stream recharge uncertainty. Together with the groundwater flow models, the streamflow realizations will allow water resource managers to evaluate risks associated with long-term water resource planning, i.e., future groundwater levels and groundwater discharge conditions based on different rates of projected pumping. 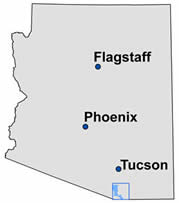