In 1992 Vionet and Maddock developed a MODFLOW model of the USP followed by the 1996 release of the ADWR model and associated scenarios representative of 1940-1990. Since the 1996 ADWR model release, two additional models representative of the USP were completed (2000 & 2007). The most recent MODFLOW model for the USP was developed by the USGS Pool and Dickinson (SIR 2006-5228) (2007). 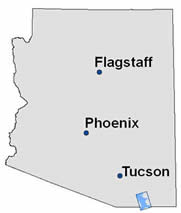