Prescott MODFLOW model was developed in 1995 and simulates groundwater flow conditions in the LIC and UAF Sub-basins (Modeling Report 9 - Corkhill and Mason, 1995). The Prescott model was updated in 2002 (Modeling Report 12 - Nelson, 2002) and in 2006 (Timmons and Springer, 2006). ADWR has just completed an update of the Prescott AMA Groundwater Flow Model (Nelson and Yunker, 2014) which is provided below. 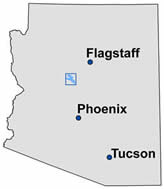