Pinal MODFLOW model development began in the late 1980's. Previous to the late 1980's, no numeric groundwater models within the Pinal AMA had been developed. Thomas Anderson (1968) developed an electric analog model simulating the groundwater depletion of Central Arizona between 1923 and 1964. Since the first ADWR Pinal MODFLOW release in 1990 the model has not been updated. The challenge in developing a model within the Pinal AMA is lack of measured data. The original ADWR MODFLOW model relied on data provided through a report by Hardt and Cattany entitled "Basic Groundwater Data for Western Pinal County"(1964). 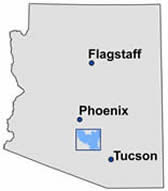