The Colorado River is managed and operated under numerous compacts, federal laws, court decisions and decrees, contracts, and regulatory guidelines collectively known as the "Law of the River." This collection of documents apportions the water and regulates the use and management of the Colorado River among the seven Basin States and Mexico.

In early 1921, the seven Colorado River Basin States authorized the appointment of commissioners to negotiate a compact for the apportionment of the water supply of the river and its tributaries. Congress allowed the states to negotiate a compact under the leadership of then Secretary of Commerce Herbert Hoover as representative of the United States. An agreement was negotiated and signed by the seven appointed commissioners from each of the Colorado River Basin States in November of 1922.

The Compact divided the Colorado River Basin into the Upper Basin and Lower Basin which are defined as those states or parts of states from which waters naturally drain into the Colorado River above and below Lee Ferry, respectively. Lee Ferry is a point on the mainstream of the River, downstream of the historic "Lee's Ferry Gaging Station," and approximately one mile below the mouth of the Paria River in northern Arizona.

The Compact apportioned, in perpetuity to the Upper Basin and to the Lower Basin, the exclusive beneficial consumptive use of 7.5 million acre-feet of water annually. The Lower Basin was given the right to increase its then current beneficial consumptive use by one million acre-feet annually. The Compact further provided that the two basins would share any burden, which might arise because of a water treaty with Mexico, equally. The Upper Basin was required to restrict its use so that the flow of the river at Lee Ferry would not be depleted below an aggregate of 75,000,000 acre-feet for any period of ten consecutive years. The Compact also established a preference for agriculture and domestic uses over water use for power generation:  1922 Colorado River Compact

This Act authorized the construction of Hoover Dam and Power Plant and the All-American Canal. In addition, the Lower Basin States made provision for the sharing of water, and authorization was given to the Secretary of the Interior (Secretary) to execute contracts for water made available by the Boulder Canyon Project, subject to the terms of the Colorado River Compact.

The water treaty between the United States and Mexico involving waters of the Colorado River (and the Rio Grande and Tijuana Rivers) became effective November 8, 1945. The Treaty allocated to Mexico 1.5 million acre-feet of Colorado R 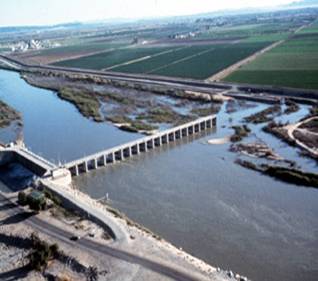 iver system waters annually. The allocation was to be increased in years of surplus to 1.7 million acre-feet and reduced proportionately during years of extraordinary drought. The Treaty dealt with quantity and was silent on the quality of water to be delivered.

In 1962, the Mexican Government formally protested to the United States Government regarding the quality of Colorado River water that was being delivered to the Mexicali Valley. Upon the request of the State Department, the governors of the seven Colorado River Basin States reconstituted the Committee of Fourteen (two water experts from each of the seven Basin States appointed by their respective governors) to advise the State Department and the International Boundary and Water Commission about Mexican water salinity issues and potential solutions.

Numerous meetings and negotiations led to the adoption of Minute 242, executed in 1973, which obligates the United States to implement measures that will maintain the salinity of the Colorado River waters delivered to Mexico at nearly the same quality as that diverted at Imperial Dam for use within the United States:  1944 Mexican Treaty

This Compact, dated October 11, 1948, divided the water apportioned to the Upper Basin by the Colorado River Compact between the five states having territory in the Upper Basin. Arizona was allocated 50,000 acre-feet per annum with the remainder of the Upper Basin entitlement divided according to the following percentages: Colorado, 51.75; New Mexico, 11.25; Utah, 23.00; and Wyoming, 14.00:  1948 Upper Basin Compact

The 1964 Decree reaffirmed the apportionment of the first 7,500,000 acre-feet per annum of Colorado River mainstream water available to the three Lower Basin States as follows: Arizona, 2,800,000; California, 4,400,000; and Nevada, 300,000. Any excess above 7,500,000 acre-feet was apportioned 50 percent to California and 50 percent to Arizona, except that Nevada was given the right to contract for 4 percent of the excess, which would come out of Arizona’s share. The Court left the allocation of shortages to the discretion of the Secretary after providing for satisfaction of present perfected rights in the order of their priority dates. Present Perfected Rights (PPRs) were defined as rights existing and used prior to June 25, 1929, the effective date of the Boulder Canyon Project Act:  1964 AZ v CA Decree

This Act also declared that the satisfaction of the requirements of the Mexican Water Treaty from the Colorado River constituted a national obligation, which shall be the first obligation of any water augmentation project planned pursuant to the Act and authorized by the Congress. This provision of the Act is very important to the states of the Colorado River Basin, and to Arizona in particular, because of the shortage provision described above.

The Salinity Control Act of 1974 (Public Law 93-320) provided the means to comply with the United States’ obligations to Mexico under Minute No. 242.  A major feature of the Act included a brine discharge canal and a desalination plant for the conveyance and treatment of Wellton Mohawk Irrigation and Drainage District drainage water (Title I of the Act). These facilities enable the United States to deliver water to Mexico having an average salinity of 115 parts per million (ppm) plus or minus 30 ppm over the annual average salinity of the Colorado River at Imperial Dam. The Act also authorized construction of four salinity control units and the expedited planning of twelve other salinity control projects above Imperial Dam as part of the basin-wide salinity control plan.  Cost sharing has been implemented for both USDA and Reclamation programs. Under this new authority, each dollar appropriated by Congress is matched by $0.43 in cost-sharing: 1974 Colorado River Basin Salinity Control Act

The GCPA obligated that a close watch be maintained on the effects of Glen Canyon Dam operations and ordered that future modifications of those operations and management actions be considered to better protect and enhance the Colorado River ecosystems. To address these stipulations, this Act also established and provided for the Glen Canyon Adaptive Management Program (GCDAMP) in 1997.

In 2007, the Secretary of the Interior signed the Record of Decision for the “Colorado River Interim Guidelines for Lower Basin Shortages and the Coordinated Operations for Lake Powell and Lake Mead.” These Interim Guidelines are intended to be applied each year during the Interim Period (2008–2026) in implementing the Long-Range Operating Criteria (LROC) for the Colorado River reservoirs.

International deliberations and amendments regarding the Mexican Water Treaty are logged and labeled as ‘Minutes’. Minute No. 323 of the Treaty, “Extension of Cooperative Measures and Adoption of a Binational Water Scarcity Contingency Plan in the Colorado River Basin,” established rules by which changes in water deliveries will be shared in parity between the United States and Mexico during surplus and shortage conditions. As a successor to Minute 319, this Minute also enumerates that Mexico can continue to store volumes of its water in Lake Mead to support healthy reservoir elevations, and commits the United States to financially supporting water efficiency projects in the Republic of Mexico. The Minute references the common vision of the United States and Mexico on a “clear need for additional and continued actions due to the impacts on Lake Mead elevation from meeting system demands, hydrologic conditions, increased temperatures, and other factors.” 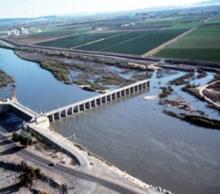